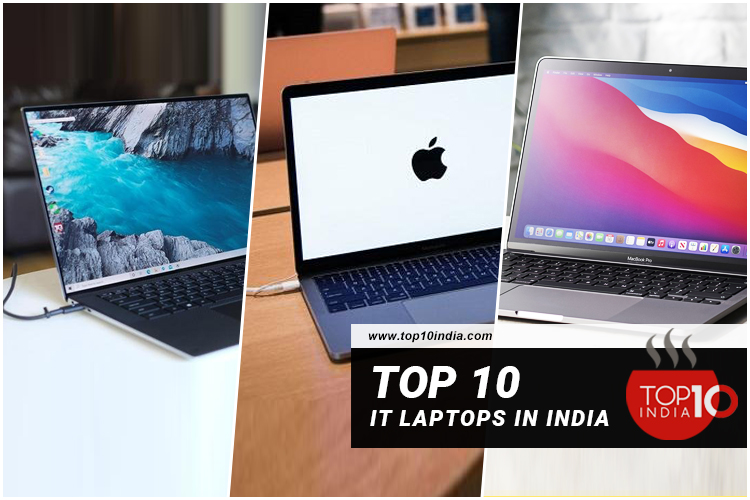 Top 10 IT Laptops in India:- Laptops are the most innovative invention that brings a revolution in computer systems and Hardware Gadgets. Alan Kay was the person who first created the concept for the laptop computer. Laptops, Tablets, and Notebooks are some of the most important electronic gadgets that are easy to carry and used in our day-to-day life. Laptops can be used for casual work, official work, playing games, making reports, editing videos, music, and many more purposes. Every laptop is suitable for a particular task. Below is the list of the top 10 IT laptops in India 2021.

Top 10 IT Laptops in India

Several laptop brands are known to make some of the best gadgets and devices in all the different budget categories in India. They manufacture gaming laptops that are power-packed with all the best features and budget laptops suitable for office workers and students. In this article, you will most probably get a fair idea to select which brand is best for working in offices and the IT sector.

Dell is an American multinational computer technology company formerly known as PC’s Limited founded by Michael Dell on 1 February 1984. The Dell XPS 15 (2020) is one of the best laptops for programming used by IT Professionals in India. This 15-inch beauty combines a stunning design, excellent build quality, and the most powerful mobile components you’ll find in a laptop. In addition, this device is thin and light, which marks it a premium laptop for programming and comfortable to carry. Best of all, its battery life is excellent, which means it is suitable to use this powerful laptop.

Apple Inc. is an American multinational technology company that deals in consumer electronics, computer software, and online services founded by Steve Jobs, Steve Wozniak, and Ronald Wayne. The Apple MacBook Air M1 2020 is one of the best laptops for programming and office use. The 13-inch MacBook Air is more powerful, thinner, and lighter with its Apple-made M1 chip. It gives a noticeable boost in performance and battery life for no extra money when it comes to programming. The M1 chip is powerful, efficient which makes the new MacBook Air brilliant as well.

MacBook Pro 13-inch is another Laptop manufactured by Apple in this list used by the IT Professionals in India. The MacBook Pro is a brilliant laptop for programming with Apple’s own M1 chip, which is also present in the new MacBook Air. You can run your programming tools without any issues, giving you speed for your workflow. It comes with an improved keyboard that is also much more comfortable to work on. The MacBook Pro 13-inch (M1, 2020) has the longest battery life ever seen in a MacBook, which allows you to work all day.

Dell is an American multinational computer technology company founded by Michael Dell on 1 February 1984. If you are looking for the best, Dell Inspiron 14 5000 is a great all-around laptop for programming, and it costs a lot less than many of the laptops on this list. It got a high-resolution Full HD display, a quad-core processor, and fast SSD storage that will keep your demands while you’re programming. If you’re on a tight budget and you want a laptop that will do everything that you need in your day-to-day programming, then this is definitely a laptop worth considering.

Google LLC is an American multinational technology company that works under Alphabet Inc. Google’s flagship headquarters in California, United States. Google Laptops are used in many places as educational tools. Google Laptop runs on Chrome Operating System, which is different from Windows and Mac OS. Google PixelBook Go is the best possible integration with Google’s software and services, with full support for running Android software. Many Chromebooks are designed to be highly affordable, with lower-spec features and performance to bring the price down. You can also run Linux apps on Google PixelBook Go. It assembles some impressive hardware, including an Intel Core i7 processor, a choice of 8GB or 16GB RAM, and a large and vibrant 1,920 x 1,080 screen or 4K touch screen if you really want to show off.

The Surface Laptop 3 of Microsoft Corporation is one of the best programming Laptops to work on. Microsoft marks this as a brilliant showcase for Windows 10, and Windows apps run perfectly on the operating system and run any tool or application on to the program. The Surface Laptop 3 is a great Professional Laptop with a stylish design, a solid aluminum shell, and a very comfortable keyboard. The newest version comes in matte black and offers fairly meaty specifications, with a Core i7, up to 16GB of memory, 1TB SSD storage, and a high-resolution 13.5-inch screen that works with Microsoft’s Surface Pen stylus.

HP or Hewlett Packard is an American multinational computer technology company headquartered in Palo Alto, California, with a revenue of US$ 15.9 billion. HP deals in various products, but HP Laptops is one of India’s best laptop manufacturers, popular for a balanced combination of functionality and style. HP recently made big changes to this popular 13-inch laptop by reducing the size and weight.

Lenovo Group Limited is a Chinese multinational company incorporated in Hong Kong and headquarters in Beijing, China. Their innovative 2-in-1 Laptops are laptops as well as tablets that will amaze you. Lenovo laptops are suitable to take your programming to another level, and Lenovo Think Pad P1 is one of them. This is seriously a powerful workstation laptop that offers professional-grade Xeon processors, with up to six cores, 4TB of VM SSD storage, an Nvidia Quadro T2000 graphics card, and up to 64GB of memory.

Huawei is one of the most popular brands known for its cutting-edge technology that has defined the progress of digital technology for electronics worldwide. Huawei MateBook 13 is one of the best laptops for programming, especially for coders on a budget. However, Huawei is best known for its excellent smartphones, which won over critics by offering features and building quality. It provides the power of a Core i5 or Core i7, a crisp, bright, high-resolution 13-inch display, weighing just 1.3kg and less than 1.5cm thick, and loads of SSD storage.

Last but not least, LG Gram 17 is the best laptop used by IT Professionals in India. It provides a large screen that makes this laptop suitable for coding. It has a gorgeous screen with high resolution & large, giving you plenty of workspaces. It also gives one of the best battery lives we’ve seen in a Windows 10 laptop, with new Intel 11th generation hardware and the best adorable laptop for 2021.

Alan Kay, who worked for Xerox PARC, first created the concept for the laptop computer. He referred to it as the Dynabook.

Dell computers are considered to be better than HP. HP has some great laptops; across their whole range, many can’t compete with other brands. At the same time, Dell has a pretty great range of laptops across the board.

Q.4- Which is the Best Laptop brand in India?

Apple is the best laptop brand in India with great design and class.

Published in A to Z, Brands, Electronics, Gadgets, News, Social and Tech