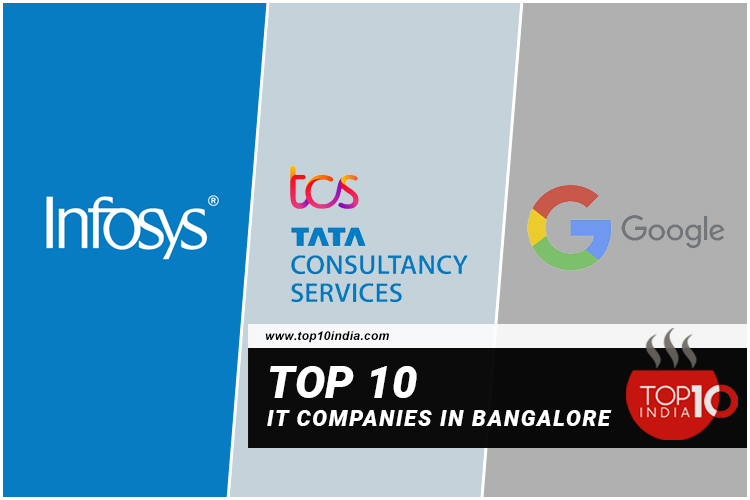 Top 10 IT Companies in Bangalore:- Information Technology is studying information systems of software applications and computer hardware. Information Technology and Software Companies are the fastest growing sector not only in India but in the World. The software company is a company that deals in various primary products that are a type of software, software technology, distribution, and software product development and claims as to the software industry. In Banglore, there are 1200+ Fortune global companies but, Below is the list of the top 10 IT companies in Bangalore or Bengaluru.

Top 10 IT Companies in Bangalore

IT industry in India deals in various primary products that are a type of software, software technology, distribution, and software product development and claims as to the software industry. Bangalore is one of the Metropolitan City, popularly known as the Silicon city of India, which is the capital of Karnataka State of India. Bangalore plays a vital role in transformation in technology like cloud computing, artificial intelligence (AI), machine learning, robotics, Internet of Things (IoT), and virtual reality is raising the lifestyle of Humans in every aspect. Look at the top 10 IT companies in Banglore based on the NASSCOM (National Association of Software and Service Companies) report.

Infosys is first on the list of top 10 IT industries in Bangalore, India, with the highest number of offices. It is an Indian multinational Information Technology Company that deals in Outsourcing processes, Business Consulting, and IT. This company was established in the year 1981 which is considered the second-largest IT industry in Inda. It is the first Indian IT company listed in NASDAQ, headquartered in Bengaluru, India. It deals with IT services, Software solutions, Consultancy services, etc. The company’s total revenue was 87,371 crore in the year 2019, with a count of 2,28,000+ employees.

TCS or Tata Consultancy Services is an Indian Multinational and the largest IT Company in India in terms of Revenue. TCS company begins in 1968 founded by Tata Sons, which is headquarters in Mumbai, Maharashtra. The company deals with IT services, Software solutions, Consultancy services, Engineering services & solutions, etc. TCS provides employment to 4,20,000+ employees in 149 locations across 46 countries. It is a better option where you can find your dream job and set your career. TCS was the first to provide cab services for its female employees in Bangalore.

Google LLC is an American multinational Information Technology Company that works under Alphabet Inc. Google’s flagship was founded by Larry Page and Sergey Brin while they were pursuing a Ph.D. from Stanford University in California in September 1998. In India, Google is headquartered in Hyderabad, Andhra Pradesh. Google also established offices in other metropolitan cities in India. Google LLC is specialized in Internet-related services and products that consist of a search engine, artificial intelligence, cloud computing, online advertising technologies, software, and hardware. There are approx 1,39,995 employees of Google working worldwide.

International Business Machine (IBM) is an American Multi-National Company that operates in more than 150 countries. The company was established on 16 June 1911 as a computing recording company but was later renamed IBM (International Business Machines). It deals in various software products, cloud computing, cognitive computing, data analytics and Internet of things, IT infrastructure, and security. IBM is headquarters in Armonk, New York. In India, it operates as IBM India Pvt Ltd having head office in Banglore. IBM provides a cab drop facility to the female employees after 7 pm to 7 am across the city.

Microsoft Corporation is one of the top American multinational companies present in 11 cities in India. Microsoft Corporation is headquartered in Redmond, Washington, which deals in various products like Microsoft Windows, Microsoft Office, and Internet Explorer, etc., which are being used in every computer in the world. Microsoft was founded by Bill Gates and Paul Allen on 4 April 1975. Microsoft acquired Linkedin for 26.2 billion dollars in 2016 and skype for 8.5 billion dollars in 2011.  Microsoft focuses on new innovative technologies like Machine Learning, AI, and cloud computing to provide robust solutions for various users.

Hexaware Technologies Limited is one of the top 10 IT and Software industries in India. It is one of the fastest-growing IT companies, BPO, and consultancy providers in Bangalore city of Karnataka, India. HTL deals in mobile application, cloud computing, digital transformation, Software applications and transform customer experience with 33 global offices across the globe. Hexaware Technologies Limited was established in 1990 by its founder Atul K. Nishar and its headquarters in Navi Mumbai, Maharashtra.

Wipro Limited is a leading multinational company and one of the top 10 Information Technology Companies in India that begins on December 29 in the year 1945. In India, it is headquartered in Bengaluru, India. Wipro Products Limited was formerly known as Western India Vegetable Products Limited. Still, it deals with IT services, Software solutions, Cognitive Computing, Hyper-automation, robotics, cloud analytics, Consultancy services, etc. The company’s total revenue was 63,862 crore in 2020 and employed 1,75,000+ employees across the six continents.

No.9- Cognizant (Top 10 IT Companies in Bangalore)

Cognizant is an Information Technology Company present in Bangalore city of Karnataka, India. It has its headquarter located in Teaneck, New Jersey, U.S. Cognizant is one of the leading American multinational IT companies that helps clients transform their existing business operating models and technology models with the rapidly changing digital technology. Cognizant is the most admired and fastest-growing company globally, which was established on 26 January 1994.

Last But Not Least, Accenture is the other software company on this list of IT companies in Bangalore. Accenture is an Irish-based multinational company headquarters in Dublin, Ireland, and offers cloud, Oracle, blockchain, Salesforce, software development, SAP, etc., and a Fortune Global company established in 1989.  Accenture has more than 492K employees rendering clients from 200 cities in 120 nations. Accenture has approx 10 offices in Bangalore.

FAQ (Top 10 IT Companies in Bangalore)

Q.1- Is it safe to live in Bangalore?

Bangalore is considered one of the safest options to live in India when compared to Delhi, Mumbai, and other metropolitan cities.

Q.2– Which city is known as the silicon valley of India?

The Bangalore city of Karnataka State, also named Bengaluru, is known as the silicon valley of India.

Q.3- How many IT companies are there in Bangalore?

Bangalore is the first IT hub in India, with 12000 companies working full time in Bangalore.

Q.4- Which is the biggest IT company in Bangalore?

Infosys leads the list of the top IT companies in Bangalore. Infosys has around 10 offices in the city in Electronic City and Hosur Road in Bengaluru, Karnataka.