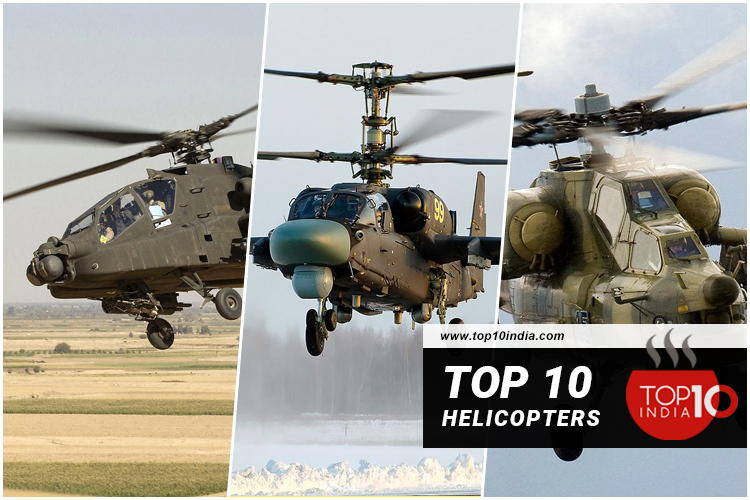 Top 10 Helicopters:- Let’s first become acquainted with the word helicopter. It is a rotorcraft and lifts by horizontally spinning rotors. Igor Sikorsky invented it in 1939. The first helicopter to reach full-scale production was Sikorsky R-4 in 1942. Let’s now look at the back story. Chinese children played with a bamboo flying toy similar to the present-day helicopters, and so from these, the scientists got the idea of making helicopters. So we could say that the Chinese dropped the idea.

Helicopters are not just used for traveling purposes, but they are widely used for military purposes. They are equipped with weapons and are used in wars. The compound helicopter also has a separate thrust system but continues to supply power to the rotor throughout the normal flight.

The Boeing is US Army’s twin turboshaft attack helicopter with a tailwheel-type landing gear arrangement. It is the US’s most trusted military helicopter. It is the most armed helicopter of all. Till now, more than 2400 of them are built by the US. It has missiles, M320 chain guns with 1200 rounds, and rockets. It is built for the USA and other countries such as the UK, Japan, South Korea, etc.

The Kamov Ka-50, also known as Black Shark, is a Russian single belt attack helicopter. It has tandem side-by-side seating, ejection seats. It is the only helicopter with an ejection system. Ka-52 serves as a command and has control over other helicopters. It has firepower that is extremely good for attacking. Autocannon is mounted in it at a fixed position, but it also adds up in lacking flexibility.

Mil Mi-28 is a Russian all-weather, day-night, military tandem, two-seat antiarmor attack helicopter. It is the newest helicopter model, which has armor with a windshield with standing cartridges. Mi-28 is a very successful helicopter making its debut in Syria in the war of Palmyra. It has been ordered by countries like Russia, Iraq, and Algeria.

Bell AH-12 Viper is a two-engine attack helicopter based on the AH-1W SuperCobra developed for the United States Marine Corps. It is competent and has long going platform. Many countries are interested in it, including Bahrain and the Czech Republic, with a classic design.

Eurocopter is a four-blade, twin-engine attack helicopter manufactured by Airbus Helicopters. It is the second and most recent helicopter to come from western Europe. The development of the Tiger started during the cold war to be used against a Soviet ground invasion of Western Europe. Missiles, rockets, and French cannons are inserted in it. It has 80% of the airframe constructed of carbon laminated Kevlar and honeycomb.

The T129 ATAK is a twin-engine, tandem seat,multi-role all-weather attack helicopter. It was developed with Turkish technology with upgraded avionics, airframe, and weapons. It has around 60 units with 32 more capabilities. A lot of countries have ordered this helicopter, including Qatar, the Philippines, and Pakistan.

Agusta 129 Mangusta is an attack helicopter firstly designed by an Italian helicopter company Agusta with many weapons, including hellfire and TOW ATGMs. It is composed of 60 units modified at the end of the cold war, and the design was simplified with a lightning up of ballistic protection. The A129 Mangusta is the first European attack helicopter with a fully computerized integrated management system to reduce crew workload.

Mil MI-24 Hind is an attack and transport helicopter. In other words, we can say that it is hybrid. So far, more than 2600 have been produced with over 60 worldwide users. Countless nations and paramilitary forces use it with incredible lasting power. Moreover is a heavily armed and armored helicopter with the most successful design till now.

The CAIC Z-10, also called WZ-10, is a Chinese medium attack helicopter developed by the Peoples Liberation Army, Ground Force. It is the first indigenous attacking helicopter produced in China. Over 300plus models have been manufactured so far. Also, it is the most successful helicopter in China to date.

South African Rooivalk is an attack helicopter based on the French Aerospatiale SA 330 Puma. It is compiled with French technology and spare parts, which are highly sophisticated. However, it is the first helicopter produced by South Africa, and its development is connected to the atlas Oryx transport helicopter.

1. Which is the helicopter that has the ejection seat system?

Kamov Ka-52 Hokum-B is a helicopter that has an ejection seat system.

2. Which is the most armed helicopter?

AH-64 Apache Guardian is the most armed helicopter.

3. Which is the first South African helicopter?

4. Which is the most successful helicopter in China?

CAIC Z-10 is the most successful helicopter in China.

Published in A to Z, Country, News, Others, Sociology & Society and Tech