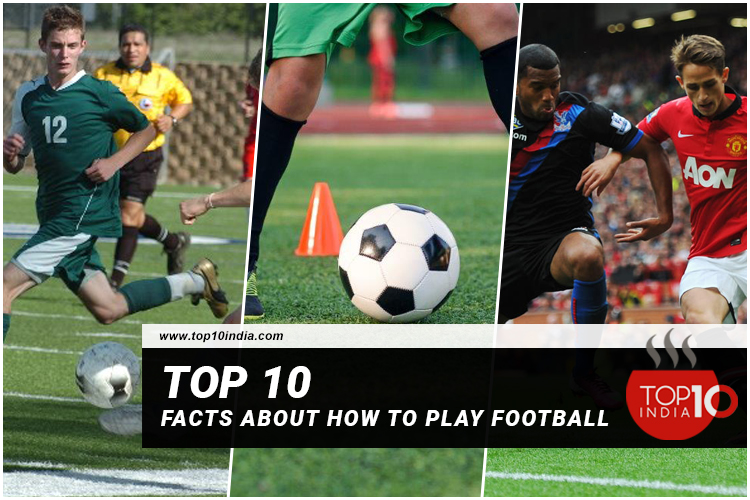 Top 10 Facts About How To Play Football

Top 10 facts about how to play football:- Football is the world’s most popular sport both in the number of players and spectators. Football can be played anywhere and by anyone despite age, gender, or type of ability. The biggest advantage is, without doubt, the flexibility of turf, whether it’s playing fields, pitches, gymnasiums, streets, parks, or even beaches. It’s not practiced or dominated by one particular country.

Top 10 Facts About How To Play Football

In this list, we have mentioned the Top 10 facts about how to play football. There are dozens of technical skills in football, from scoring a goal to the header, passing well to your teammate, dribbling, controlling the ball, doing throw-ins, defending, agility, endurance, and more. So here’s a quick overview of how to be a good football player. These Top 10 facts about how to play football can help you.

No.1 Understanding the rule of the game

No.2 learn a basic thing about football.

Football or soccer is one of the most popular sports in the world. One of the reasons is that the sport’s only equipment is a ball, cleats, shinguard, and any markets for the goal. The game consists of a team of 11 players. One of the players is considered a goalkeeper, and that player’s objective is not to allow the ball to go into the goal. There are four other positions in football is:

No.3 Technical exercise before playing football

Every footballer must train to run fast. To do this, It’s important to ensure that you warm up properly and work on your speed. Every muscle in your body is used to maximize your running potential. There is some exercise that should do a player before playing football.

The heading depends on the situation in the match; This technique can be used to clear the ball, pass to a teammate or score a goal. A header involves touching the ball with your head.

To give it more power, bend your legs, swing your chest backward and then push it forward by tensing your abs. As you finishing this swinging movement, push your neck forwards too; as for where to hit it, try to position the ball on your forehead. It’s just the right shape for the job as well as being the boniest, and therefore least painful, part of your head.

Short Pass:- A short pass rolls to the ground to make it easier for the teammates receiving the ball to control.

Long Pass:- This pass lets you send the ball to a teammate who is far away from you. The ball should go up into the air so that opponents cannot intercept it so easily.

No.6 Improve your dribbling skills.

Dribbling allows you to maneuver the ball around the field without losing possession. Mastering the skill takes a lot of hours of practice.

First of all, it’s important to know about the types of dribbling drills, namely;

No.7 Learn to control a ball.

Good ball control is significant in football because it allows you to move around without losing the ball. Balls control involves keeping the ball close to you so that you can frequently change the pace and direction. There are many parts in the body through which you can control airball.

A throw-in is essentially that moment when you restart the game after the ball has gone out of the boundaries of play.

When is a throw-in awarded?

How to take a throw-in?

No.9 How to be a better goalkeeper

While you are learning how to be a good footballer, why not also learn to be a better goalkeeper, the goalkeeper’s primary role is to stop and catch the ball when a player of the opposition shoots at their goal. A blocked shot preserves the game’s score and can change the momentum of the game. There are many methods to stop the ball depending on the precision and the strength of the shot.

No.10 Learn How To Defend While Playing Football

This is an important stance in learning how to play football. All the players in the team who do not have possession of the ball have to defend. Their goal is to stop their opponents from scoring the goal, provoke them into making errors, and intercept the ball.

1.Which player can touch the ball with his hand?

A goalkeeper can touch the ball with his hand.

2.Before the goalkeeper, who has to protect from scoring the goal?

Before the goalkeeper, defenders have to protect from scoring the goal.

Published in A to Z, General knowledge, News, Social and Sports