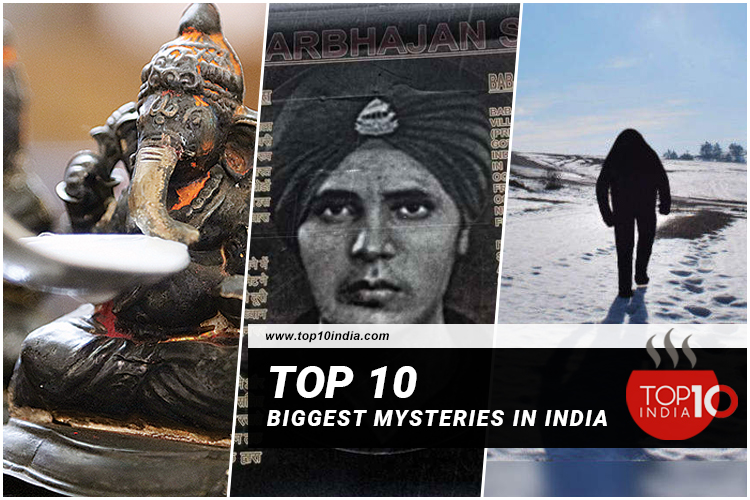 Top 10 Biggest Mysteries In India: The Lord Ganesha taking a drink of milk is the number 1 biggest mystery in India, that happened somewhat in the year 1995 and went viral that all the followers of Ganesha starting pouring milk in the temples. India has emerged from a period of widespread superstition in which the unbelievable was still believed. Indians have evolved into rational people who are no longer limited by the idea of accepting something only because they can’t fight it with facts and figures.

There are always certain mysteries in or around that one thinks can be true or fake, and the curious people find reasons to bring some conclusion to such mysteries. But It’s vital to remember that there are unresolved Indian riddles since we still don’t have a rational explanation for them. Following are the top 10 biggest mysteries in India.

No 1. Ganesha Taking a Drink of Milk

On the morning of September 21, 1995, it was a typical morning. An unusual occurrence began to be recorded, in which statues of the Hindu god Ganesha swallowed milk being offered from his devotees. Isn’t it true that statues don’t drink milk? Moreover, thousands, if not millions, of people watched this incident across India’s cities.

By lunchtime, the story had begun to reach beyond India. A similar phenomenon may be seen at Hindu temples in the United Kingdom, Canada, the United Arab Emirates, and Nepal, among other places. It was even observed in the United States at the Hindu Temple Society of North America (Ganesh Temple). It is one of the biggest mysteries in India.

No 2. In the Nathula Pass, a ghost soldier is on duty

The savior of all army forces serving in this region is considered an Indian soldier who died at Nathula Pass in eastern Sikkim. Baba Harbhajan Singh is recognized as the “Hero of Nathula” for assisting army men in this hostile Himalayan high altitude region. It has become folklore among the army soldiers there, and a shrine has been built in his honor.

When guiding a herd of mules carrying supplies through the Nathu-La pass in 1967, he met with an accident and slipped in a glacier, dying. Even though his body was retrieved three days later and cremated with national honors, the inhabitants of Nathu-La Pass refuse to accept that he is no longer alive!

This is because he is suspected of waking up soldiers on duty at this post and informing them of impending enemy assault! After his death, he appeared to a soldier in his nightmares and urged him to build a shrine in his honor. It is one of the famous mysteries in India.

No 3. Yeti sightings have been reported in the Himalayas

There have been clear indicators of a Yeti in the Himalayan region, and it is not just an inflated fake. Despite numerous stories, pictures, and other signs of enormous footsteps across vast snow lands, no physical corpse has ever been discovered.

Several investigations have even suggested that the Yeti may be an ancient human relative thriving in full harmony. However, until tangible proof is discovered, the Yeti will remain one of the world’s greatest mysteries.

While a 500-year-old mummy may not seem mysterious, Egypt has mummies that are thousands of years old. This mummy was not mummified, which is worth noticing. Rather, it’s a corpse that’s been preserved as well as a mummy.

The creepy and old ritual of self-mummification is revealed during a hike in the Himalayas to the small town of Ghuen in Spiti. A 500-year-old mummy rests in this tiny single-room concrete construction, shielded solely by a thin sheet of glass. Sangha Tenzin’s body was said to have undergone a remarkable natural mummification process.

The civilization of the Indus Valley raises a slew of unanswered concerns. Why, given its sophistication, did this civilization not spread beyond the Indus Valley? In general, the region where the Indus valley cities grew up is parched, and it’s reasonable to assume that urbanization occurred along a river that ran through a virtual desert.

No 6. The silent village of Kuldhara

Kuldhara is a community located a few kilometers from the city of Jaisalmer. What’s remarkable about this location is that it was inhabited from roughly 1295 A.D. until the 19th century, until one day, every one of them vanished. There was no indication of slaughter or kidnapping in the area. The location is also considered cursed, with locals claiming that no one has ever succeeded in occupying it.

No 7. The Mysterious Floating Pillar

The Mysterious Floating Pillar temple, dedicated to Lord Shiva, is a well-known archaeological and historical monument. One of the temple’s 70 pillars hangs in the air, which is an unusual feature. This pillar is not supported in any way. People believe that this was one of the many tactics that temple builders of that era were aware of.

Jatinga is a small village in Assam where residents encounter a strange and enigmatic event. The phenomenon under question is mass avian suicide. Every year between September and November, hundreds of local and migratory birds fly and crash into houses and trees for no apparent reason.

Scientists have yet to explain this occurrence, and locals continue to believe it is the activity of bad spirits. As a result, Jatinga is a strange place to visit, where a mystery hangs over everyone.

No 9. The Kongka La Pass in Ladakh

The Kongka La Pass In Ladakh is a territory located on the disputed border between India and China, is one of the world’s most inaccessible locations. Both countries’ military was involved in a major conflict in 1962. Following this, China and India reached an arrangement under which no one will be permitted to patrol the territory, but they will keep an eye on it from afar.

No 10. There’s a lake full of skeletons (Top 10 Biggest Mysteries In India)

A British woodland guard discovered many human skeletons strewn about and floating along the lake’s edge. Initially, the skeletons were thought to be the remains of Japanese soldiers killed during the war, but this theory was debunked in 2004.

1.  Which is the most mysterious place in India?

Bhangarh Fort, Rajasthan, is the most mysterious place in India.

2. What are some mysteries in India?

Published in A to Z, Entertainment, Others, Social and Sociology & Society