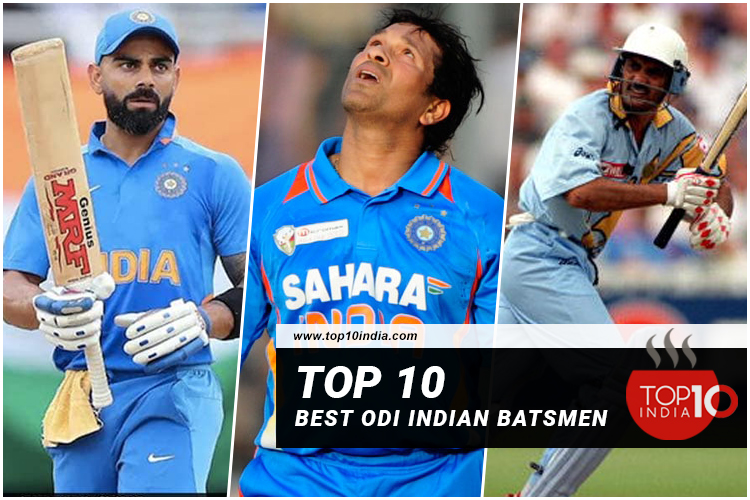 Top 10 Best ODI Indian Batsmen: Virat Kohli, the husband of the Bollywood actress Anushka Sharma, is the number 1 best ODI Indian Batsmen who is loved by all the cricket maniacs. Many sports such as basketball and football have gained popularity, but deep down, we know that cricket possesses India’s heart. Most of the betting is also towards cricket. Cricket is being played in every part of the country, mainly in the streets, the most famous stadiums for street players.

India’s professional cricket team has some legendary players like Sachin Tendulkar, Rahul Dravid, Anil Kumble, and many more who have no competition worldwide. The cricket maniacs worship the ODI Batsmen as gods and always watch them playing on televisions or in stadiums across the country. Here is the list of the top 10 Best ODI Indian Batsmen.

Virat Kohli is an Indian cricketer, a famous ODI Indian batsman, and the current captain of the Indian cricket team. When he was 19 years, he made his debut as an ODI for India against Sri Lanka. In 2011 he made his test debut and won the title of ODI specialist by 2013. As a batsman for the Indian Cricket team, it does not take much time to establish himself as a regular in the ODI middle-order, and he was one of the squad members that won the 2011 WorldCup. He is the fastest batsman to score 8000, 9000, 10000, 11000, and 12000 in ODI cricket.

Sachin Ramesh Tendulkar is the best ODI Indian batsman and was born on 24 April 1973 in Mumbai. He has also served as a captain of the Indian National Team. He is one of the legendary batsmen all over the world. He has been given nicknames such as little master, Master Blaster, etc. His biggest achievement is being the highest run-scorer in international cricket. The only player who scored one hundred international centuries, becoming the first batsman to score a double century in one-day cricket, has the record of most runs in both tests and ODI.

Mohammad Azharuddin is famously known as Azhar among the cricket fraternity. He is one of the most successful Indian captains and played 99 tests and 334 one-day matches. In 2000 his international career came to an end when he was found involved in match-fixing scandals and thus was banned by BCCI for the rest of his life. He has been elected as the president of Hyderabad Cricket Association in September 2019.

MS Dhoni was born on 7 July 1982. He was the captain of the Indian National Team from 2007 to 2017 for limited-overs format. He has fulfilled the responsibility of being the captain as under his supervision India won the 2016 Asia Cup, 2011 ICC cricket world cup, and 2013 ICC champions trophy. He is also considered the best wicket-keeper of all time as he was the first one to effect 1000 stumping in ODI cricket. He has scored more than 10000 runs in ODIs in limited over formats.

Sourav Ganguly is also popularly known as Dada which means elder brother in Bengali. During his playing career, he proved himself as one of the world’s leading batsmen. India has achieved so much in the field of cricket under his captainship. He earned himself the nickname God of the offside because of his elegant stroke play square of the wicket and through the covers. Now he is the current president of the board of control for cricket in India.

Virendra Shewag is one of the best ODI Indian batsman. He is known as one of the destructive batsmen of all time as he plays very aggressively on the field. In 2009 he became the first Indian player and the first player of any nationality to be honoured by the Wisden Leading Cricketer in the world. He was appointed as the team’s vice-captain under Rahul Dravid, but due to his poor performance, he was replaced by V.V.S.Laxman in 2006.

Yuvraj Singh played his first test match in 2003. In a match against England, he hit consecutive 6 sixes in one over, which Stuart Broad bowled. In the 2011 ICC cricket world cup, he was the man of the tournament and one of the top performers at the 2007 ICC world cup. He was the first player to take a 5 wicket haul and score fifty in the 2011 world cup.

Rohit Sharma is a famous ODI Indian batsman who was born on 30 April 1987. In 2006 he made his debut for India against New Zealand and made India win. His innings of 142 in 123 balls are quite unbeaten against the north zone at the Maharana Bhupal College ground in Udaipur, which brought him to the limelight.

Rahul Dravid was born on 11 January 1973. He has been the coach of the India Under-19 cricket team from 2016 to 2019. Under his coaching, the team was the winner of the cricket world cup in 2018 and runners-up in 2016. Rahul Dravid was appointed as the head of NCA by the BCCI because of his sound batting techniques. He scored 24177 runs in international cricket, for which he is known as the greatest batsman in the history of India.

Shikhar Dhawan was born on 5 December 1985. Before making his debut in 2004, he has played for India under 17 and 19 teams. He became the highest run-scorer for India in the 2015 world cup and the fastest Indian to reach 3000 ODI runs. He became the first Indian and sixth batsman to score a century before lunch on the first day of the test against Afghanistan.

Virat Kohli is India’s No 1 batsman.

Virat Kohli is the No 1 ODI Batsman.

Yuvraj Singh is the best ODI player in India.

Published in A to Z, General knowledge, News, Personality, Social and Sports