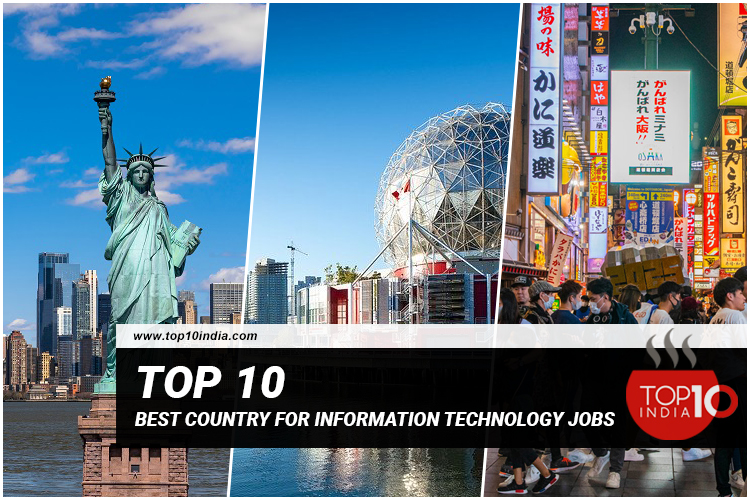 India is a leading Hub of the IT sector and computer science, where technological innovations are reshaping the world. The Transformation in technology like cloud computing, artificial intelligence (AI), machine learning, robotics, Internet of Things (IoT), and virtual reality is raising the lifestyle of Humans in every aspect. So we conducted some research and came up with some of the top 10 best countries for Information Technology jobs for better career opportunities, rewards, security and quality of life, etc.

No.1- United States of America

The United States of America is in the first position in the list of the top 10 best countries for Information Technology jobs globally. The USA is the birthplace of the great tech giants and the headquarters of the technology industry. The United States is the best choice for future immigrants, where the competition is huge. There are several opportunities for professionals in the field of entrepreneurship and career in the IT sector. Microsoft Corporation, Oracle Corporation, Adobe Systems, HP, Amazon, Sony, Facebook Inc., etc., are some USA-based IT and Software companies in the World. Austin, Texas, San Francisco, California, Washington DC, and New York City are some popular IT hubs in the United States of America.

Canada is among the most popular fastest growing IT hub and one of the world’s best countries for Information Technology jobs. In Canada, more than a fifth of the population are foreigners. Canada has one of the highest per capita incomes in the world. Both the USA and Canada have similar technological ecosystems and IT Sector jobs convenient for immigration with rules. Constellation Software Inc., Zoom, Prodigy Ventures, Medella Health, and Open Text Corporation are some of the top IT companies in Canada. Google, Microsoft, Intel, and Uber have announced plans for new offices in Canada. Toronto, Ottawa, Vancouver, and Victoria are popular Cyber cities and IT hubs in Canada.

Japan is a land of technology and startups in the World. Japan is like a silicon valley – a ground of InfoTech companies and start-ups in the world. Tokyo, the capital of Japan, is one of the most populous cities and economic centers, which is considered a hub for software, innovation, and technology. Fujitsu, Hitachi, Google, Salesforce, Rakuten, Guidewire, SAP, NEC, NTT Data Corporation, Softbank Group, Nexon, and OBIC corporation are top companies of Information Technology suitable for career and jobs in Japan.

United Kingdom is the other popular country for IT jobs in the world. Large cities can be costly to live in. The technical industry in the UK provides opportunities for IT professionals with an initial and expert level of specialized skills. Recently, the UK has also applied stringent measures to impede immigration. Hyperlink Infosystem, DataArt, iTech Art Group, Checkout.com, Cazoo, Hopin, Graphcore, and many other IT and software companies are present in the United Kingdom, where London is the main IT Hub with several programmers. So, the UK is still one of the best countries for IT professionals.

China is the largest Asian country with the highest number of career opportunities and jobs in the world. China is the most developed and leading company in the field of Information Technology. There are many job vacancies in many companies, including China mobiles, Xiaomi, Alibaba group, Tencent, Baidu, and Bytedance. The Headquarters of top IT and Software companies (like Amazon, Google, Apple) are also present in China. Beijing, Shanghai, Shenzhen, Hangzhou (Alibaba’s headquarters) are firmly established as the country’s leading tech Hubs and a major focal point for the industry for tech innovation.

Australia is the smallest continent and one of the top 10 countries for IT jobs globally. Australia turns into one of the most expensive places to live in the world but, the prospects for working in the IT industries are excellent. Apple, IBM, Capgemini, Oracle, Slack, SAP, and Salesforce are some of the Top IT companies headquartered in Melbourne, Australia, that provide employment and appreciate highly qualified specialists. Procedures for permanent residence in the country are simple and easy to handle for the Immigrants of other countries and one of the best options to settle.

Singapore is one of the best and most developed Asian Countries in the World. This is a tiny country, and also very peaceful. The software and IT industry play a vital role in the growth of revenue of the country. The IT industry is developed and offers many opportunities for IT professionals with skills and knowledge. Xact IT solutions, Cyber Infrastructure Inc., Alibaba, Websailors, A3logics, Virtual Electronics PTE Ltd., Tencent, are some of the top IT companies in Singapore. Singapore ranked at the second position by World Digital Competitiveness Ranking in the most advanced technological countries in the world.

Dubai is popular as one of the best tourist spots worldwide, but it is now a leading country for Information Technology known worldwide. Dubai is the best choice for future immigrants where the competition is on a high level. There are several opportunities for professionals in the field of entrepreneurship and career in the IT sector. Microsoft Corporation, Oracle Corporation, IBM, Etisalat, SAP, Cisco, Google, Facebook Inc., etc., are some of the top IT and Software companies headquartered in Dubai.

India is a leading company in Information Technology and Innovation all around the world. The CEO and MD of many Multi-National Companies are Indian. TATA Consultancy Services, which is the best IT service company with the highest revenue in the world. TCS, Wipro, Infosys, HCL, Tech Mahindra, Oracle, Larsen & Turbo, Mphasis, Mindtree are the Indian-based IT company which provides employment all around the globe. Microsoft, Google, IBM, Facebook, Cisco, AMD are also headquartered in India. NCR (Gurgaon, Delhi, Noida), Banglore, Hyderabad, Mumbai, Chennai, Mangalore, Pune, Kolkata, and Ahemdabad are the popular IT hubs in India.

Last but not least, France is a well-known country for Information Technology and Innovations. France is a country of inventors, pioneers, and entrepreneurs. There are great prospects for IT professionals who are very conservative when it comes to immigration. They tend to prefer people from French-speaking countries. Astek, SAP, Murex, Google, Microsoft, Salesforce, Cisco, and Apple are the main IT industry in France. To settle in France is not such a bad idea if you know a couple of things about IT.

Q. Who is the richest Ceo?

Jeff Bezos is known as the richest person in the world who is the CEO of Amazon.

Q. Which country is best for earn money?

The United Kingdom is the best country in the world with the highest pay scale.

Q. Which is the largest IT services company in the world?

TATA Consultancy Services is known as the largest IT company in the world.

Q. Which is the No.1 company in India?

Reliance Industries is the best company in India, with a market capitalization of INR 14,20,338.

Published in A to Z, Country, Others, Sociology & Society and Tech