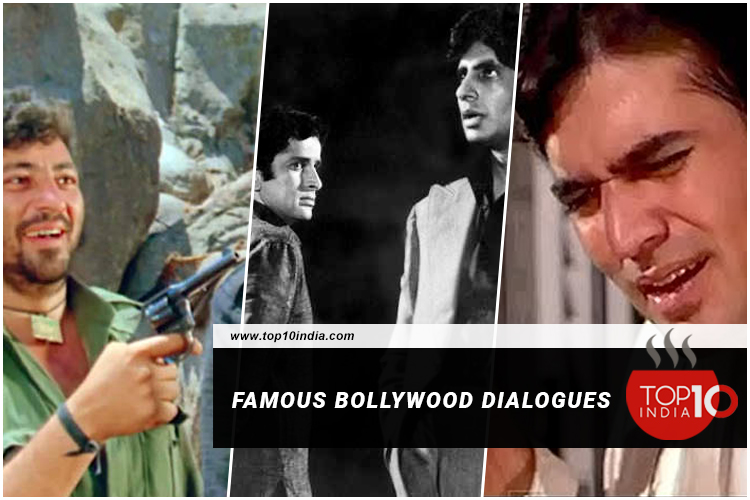 Famous Bollywood Dialogues: Have you ever wondered, what is the most important thing that makes a movie, Classic or a Blockbuster hit? Yes, you guessed it right! It’s the dialogues of the movies.

If you ever noticed, most of the Superhits movies have some famous dialogs or dialog sequences that influenced the audience on a different level, making it a memorable movie. So, here is a list of the top 10 famous Bollywood Movies dialogs of all time.

Without any argument, this one is the undisputed champion of our list and the most famous dialogue or dialogue sequence of all time. This dialog was not only famous in its time but it is still very famous and familiar to different generations of people. The Dialogue was delivered in the movie “Sholay” by the villain “Gabbar Singh” when his troops fail to loot things from the Villagers. This character is said to be one of the best negative roles played by any actor. The movie itself is considered to be the biggest hit of Bollywood.

This dialogue is a very tough competitor for the number one spot and manages to settle at number 2 in our list. One of the most iconic dialogues of Hindi cinema history. This dialogue became a nationwide sensation and people still reply with this dialogue in a funny humor when someone says “Tumhare Pass Kya Hai” they say “Mere Pass Maa Hai”. The dialogue belongs to the movie “Deewar” where two brothers a policeman and a don argue over the values and ethics of life.

No surprise for guessing this one, as it is definitely among the top Bollywood dialogues of all time delivered by the first-ever Superstar Shri. “Rajesh Khanna”. This movie is an old-time romantic drama movie that showcases the miseries of a rich man who is ignored by his wife and to seek solace he goes to Pushpa. The story focuses on how a human require love, care, and attention more than just lust and materialistic things. The songs of this movie are still very famous and loved by people of all generations.

One of the most iconic dialog that highlights the loopholes and drawbacks of the system of our country. This dialogue is a clear message towards the weak and slow procedure of justice that prevails in our country. The dialog was delivered by the actor “Sunny Deol” in the role of a lawyer, when he burst out in anger in the court and highlights how the corrupt people use the system of court’s hearing date as a weapon to distort facts, evidence, and witnesses and how poor people sell their everything to get justice but are still unable to get it.

This one is another entry from the Movie “Damini”. The Dialogue “Ye Dhai Kilo Ka Hath Jab Kisi Pe Padta Hai Na, To Aadmi Uthta Nahi Uth Jata hai” is one of the most famous dialog of the action star “Sunny Deol”, With the National Award-Winning Performance in the movie “Damini”. The movie is also considered one of his best work, where he plays the role of a retired Lawyer turned drunkard how fights for justice for the deceased Urmi after meeting the woman named Damini.

Although Amitabh Bachchan has many famous dialogues from different movies but this one is the most famous one of the Big B. The dialogue appears in the movie “Shahenshah” when the vigilante Shahenshah visits a stable to stop the illegal gambling activities running in the shadow of the Stable. When the leader of the goons asks him, who are you. He replies “Rishtey Mein Toh Hum Tumhare Baap Lagte Hai, Naam Hai Shahenshah”

This dialogue is from the movie “Baazigar” where Vicky first loses the Go Karting race out of respect to the heroine’s father then go for the rematch and then win by a distance margin. After asked by the heroine “why you lost the first one” he says this famous dialogue “kyunki Haar Ke Jeetne Wale ko Baazigar Khehte Hai”. Shahrukh Khan played a negative character in the movie, who is held bend on taking revenge from the heroine and his family.

One of the greatest movies of all time and one of the most famous dialogue of 90’s era and later. “Dilwale Dulhania Le Jayenge” movie has the record of running for more than 25 years at the cinema called “Maratha Mandir” and is still shown. This movie is considered to be the biggest hit of Shahrukh Khan and he gained his popular name “King Khan” after the release of this and few other movies like “Kuch Kuch Hota Hai” and “Dil to Pagal Hai” movie.

We have another entry from the movie “Dilwale Dulhania Le Jayenge” but this time it’s from another greatest actor of all time Shri. (Late) “Amrish Puri”. He played a role of a strict father with cultural value and a believe in traditional things. The dialogue appears in the climax of the movie when he realizes that Raj is the perfect guy for his daughter and allows her daughter to go with Raj. At that point he says “Jaa Simran Jaa, Jee le Apni Zindagi”.

Q1. Which is the most famous and best dialogue in Bollywood?

Ans. “Kitne Aadmi the re Kaliya” is the most famous, and best dialogue of Bollywood.

Q2. Which Movie’s Dialogues are the most Famous in Bollywood?

Ans. Sholay movie dialogues are the most famous dialogues in Bollywood.

Published in A to Z, Entertainment, News, Others, Social and Sociology & Society