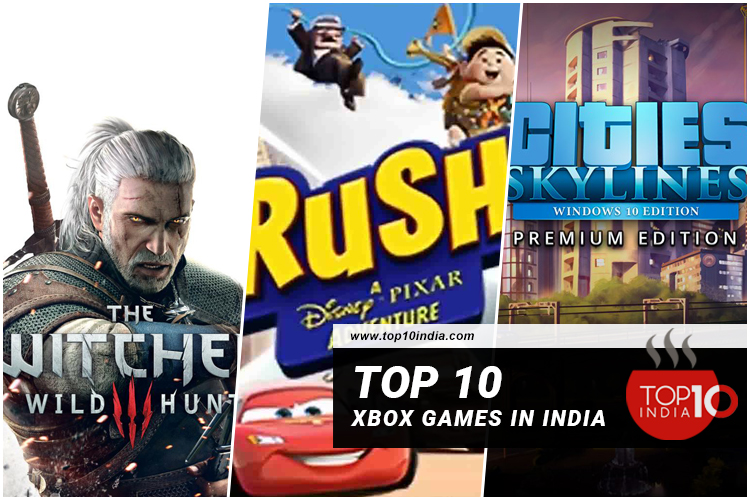 Top 10 Xbox Games in India | Best Xbox Game For Indian’s: If you are somebody who gets excited by merely hearing about Xbox or PlayStation. Then, my dear friend, this article is a must-read for you. Today here we are going to discuss the top 10 Xbox games in India. Before which let’s talk about Xbox. Xbox is a kind of platform that gives many choices over consoles, games, and accessories. For a much better experience, one can invest and buy an Xbox unlimited game pass. Xbox games are similar to that of a video game, and one can choose from various genres to play from. Now let’s move to the list quickly.

First, in the line-up, we have a fantasy-based video game. Where is popularly known as The Witcher 3: Wild Hunt by the name itself, it is clear that it’s on the top of Xbox games without any doubt. The player plays as a monster hunter, Geralt of Rivia, who will look for a child of prophecy. Geralt of Rivia is a superhuman character with the ability to change. So in this video game, there is a lot of action and cunningness. To play this game, you must have crossed your 18 years of age.

Rush is a Disney Pixar presenter and successfully secured the second position in India’s top 10 Xbox games. The game is inspired by Disney films like “The Incredibles,” “Ratatouille,” “Toy Story,” and “Finding Dory.” One must be familiar with the characters of the above movies. Then you have to brush your intelligence to decipher the given riddle. Then you get a chance to unmask the disguised mysteries, that’s all. The game is supported in OS Xbox one or windows 10 version; else, there is no restriction in the game. Even there are no age limitations in the game.

Cities Skyline – Xbox one Edition is at third position in our top 10 Xbox games in India. This game came out to be a blessing for an imaginative person who loves to make a castle independently. Like the real planner of cities, one will be assigned to make a city.  The Player has to be imaginative and creative. Citizens must be provided with all kinds of wants. Heavy taxation will not be entertained here. Being a planner game tends to improve your ability to make decisions and plan your moves properly.

To fill up the 4th position in the list of top 10 Xbox games in India, we have Rocket League at number 4. Rocket League is a video game that offers the players the opportunity to feel the outdoor game indoors. The difference is only that one has to play the game through a rocket-powered car. So to succeed in this game,,, one has to be flexible enough with their allotted cars when to kick the ball off in the opponent net and avoid chasing by the opponents. This game gives us excitement and thrill in the path of victory.

Xbox games are the best to play. Assassin’s Creed IV Black Flag is one of the top-rated games, at number 5 in our top 10 list. After reading the name, you can understand it is an improved version of the Assassin’s Creed series. There are a lot of newly added features which will help you to meet your goal easily. It is an adventurous game that offers players free and tells to accommodate their freedom by attacking ships, exploring the jungles, villages, and many other places with renovated weapons. Spyglass is also there to help the players watch over the far away ships and islands to find treasures, animals, and lots of other things.

In sixth place, we have Surviving Mars. Who wants to go outside the earth? Do you think it is possible? Yes, it is very much possible, but you have to do it through Surviving Mars. Yes, Surviving Mars offers its players an opportunity to build up a nation on Mars with many facilities essential to living in. Players will go to Mars in rovers and drones. Then with their availability of the place on Mars, they have to make new earth there to live in the red soil. Doesn’t this excite you? But one must remember thatisasters like storms and attacking monsters give you a feeling of excitement and reality.

The Medium is placed number 7 in our top 10 list of Xbox games. Who does not love to know about the mysteries of the world? Everyone does. But specifically, a group of strong aspirants likes to know about the likes of ghosts and souls. If you have this sort of taste, you must play the game. It is a psychological game where Marianne,, as a medium, enters into a soul and tries to figure out all sorts of troubles within the soul. As she has the supernatural power to solve the problems, she often gets distracted by her dreams. Though dreams are nothing but hints towards finding out the mystic problems of the souls, She also gets her energies in spirit wells. Just play it to know more.

Hellblade: Senua’s Sacrifice is positioned as eighth amongst the Xbox games. Senua’s love for her lover is without any comparison. The game is about Senua, a Celtic warrior with mental complications. As the video game offers players to play the game with earphones, it thrills them to hear all sorts of physiological upheavals of Senua. There are no scary monsters, but the sound of the action done by Senua is worthy. So if you want to take yourself on the journey of love, revenge, action, play the game.

At number 9, we have Tomb Raider: Definitive Edition. It’s a fight for survival kind of game. The game is displayed in wonderful places, which excites the players. Lara Croft is the main character of the game. How she overcomes all her struggles to cope up in an unknown land is the main fascinating feature of the game. The game is shown in a manner that pushes the players to play more. Lara Croft’s journey from an amateur adventurer to a mature survivor attracts the players.

Last we have Mental Gaer Solid V, which is ranked tenth. It is a game that offers players to lead their role as an exiled snake. Players will not give any permission to use mountains or rocks to reduce their way to meet the targeted area,, but they can use other things like hiring a helpmate to destroy the enemies. But the players do not get a chance to kill an enemy manually. They are prohibited from using weapons directly. So it is a power-based adventure game with the disguise of a snake.

What is the best option for you? But in a diversified country like India, it isn’t easy to rate the top ten games. But I can assure you these are one of the best games on Xbox which will deliver you action, adventure, psychological thriller. Full variety is available. Just choose your favorite, and happy playing!

Published in A to Z, Gadgets, Game and Tech