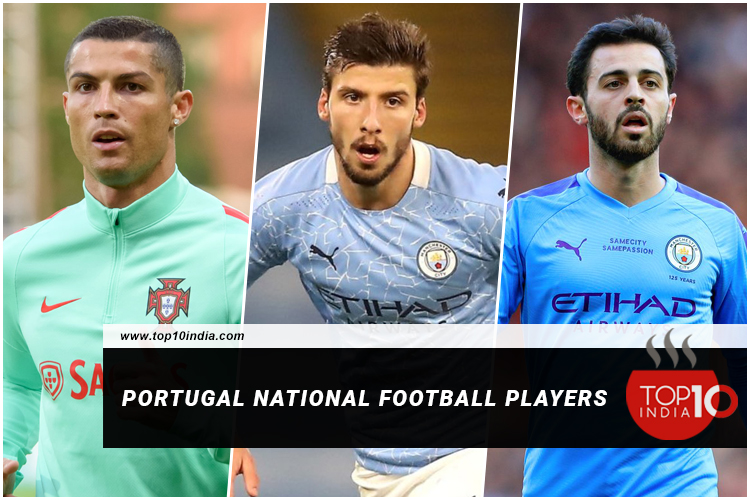 Portugal National Football Players:- Portuguese players have performed to a high standard across the continent this campaign, be it in their home country, or abroad. Portugal is currently both European Champions and UEFA Nations League holders. Their twin triumphs on the European stage have also ensured that Cristiano Ronaldo, one of the greatest footballers ever to have played the game and definitely the country’s finest ever has two international trophies on his glorious resume.

In this list, we have mentioned the Top10 Portugal National Football Players. These are the recent update according to our research and study we have place the ranking of the Portugal players. These players are very young and they were also can be called the youngest football players and Cristiano Ronaldo was the most talented and popular player on Portugal’s national team.

Ruben Dias is a Portuguese professional footballer who plays as a center-back. He made his senior International debut in 2018. He won the 2019 tournament on home soil, while also being named as the man of the match in the final. He is skilled at poking possession away from an opponent or stealing the ball, using his upper-body strength to move his opponent off the ball. A prominent technique of his when dispossessing an opponent involves Dias wrapping his leg around them and approaching the ball from the side.

Bernardo Silva takes the third spot in the list of Top 10 Portugal National Football Players. He is an influential member of the starting eleven. Silva is renowned for his quick feet and dribbling ability in tight spaces, a key member of his club Manchester City, Silva can often be seen on the right-wing, linking up with his fellow midfielders and threading passes for the attackers. Silva made his senior debut for Portugal in 2015 after being caped by the nation’s youth teams at under-19 and under-21. He was being named Manchester City’s Player of the year.

Nuno Mendes is a Portuguese professional footballer who plays as a left-back for Sporting CP and the Portugal National Team. Nuno Mendes shows impressive defensive skills, including when compared to the average full back. He still has some flaws but we are impressed but his overall defensive game, particularly as he started his youth career as a ‘Trequartista’. Nuno’s strength is his dribbling, an important feature for modern fullbacks. He ranks third for total dribbles among the league’s defenders, although his success rate could be improved.

Bruno Fernandes is a Portuguese football player who plays as a midfielder. Fernandes started his career for Portugal in November 2017, after previously being capped at under-19, under-20, and under-21 levels. In 2019 he was being named Primeira Liga Player Of The Year. Fernandes is a direct, energetic box-to-box playmaker who is capable of both taking on defenders and setting the rhythm of play. Fernandes boasts a prolific goalscoring record from the midfield position. He frequently shoots from outside the penalty area and is an accurate free-kick and penalty taker. He can also operate in a deeper central midfield role, or as a second striker.

Pepe is a Portuguese professional football player who plays as a center-back. Pepe played for Maritimo, Porto, Real Madrid, and Besiktas with individuals and team success with the middle two clubs. He has also won three Primeira Liga titles and two Taca de Portugal titles with Porto. Pepe opted to play for the Portugal national team and has earned 118 caps since his debut in 2007. Pepe is known for his work rate and hard-tackling style of play due to his height he is also an aerial threat on set-pieces. He has also deployed as a defensive midfielder at the international level.

The young striker set pulses racing in the Bundesliga by scoring eight times for Eintracht Frankfurt in 12 games after the league restarted following the pandemic-induced break. Portugal’s big hope for the future to lead their forward line, Andre Silva, is playing for Frankfurt as a loanee, having already bagged a move to AC Milan after shinning for Porto at the start of his career. Silva has played with acclaim for Portugal at various age-group levels, proving his potency in front of goals consistently in big events.

Fabio Coentrao is a Portuguese footballer who plays for Rio Ave. Mainly a left-back, he also operated as a winger. On 10 August 2011 Fabio Coentrao scored his first international goal, netting through a rare header in a 5-0 victory over Luxembourg. Fabio Coentrao is a very technical and very good dribbler. During his career, he played as a left-back or winger, which allows him to get in the middle and shoot. Among his skills are an intelligent sense of position, determination, and high stamina. He has just scored 25 goals in all competitions during his club career and therefore we have not seen him celebrating his goals very much.

Nani is a Portuguese professional footballer who plays as a winger. He represents Portugal in international football and has played over 100 times for the senior national team. He began his football career playing for the local side of Real Massama. Nani was included in the Professional Footballers Association, Premier League Team of the Year on one occasion and was a nominee for the PFA Young Player of the Year in 2011. Nani’s ability and playing style often invited comparisons with the club and international teammate Cristiano Ronaldo, however, Nani’s style developed into more that of a traditional winger than Ronaldo’s evolution into a center forward.

Joao Moutinho is a Portuguese professional footballer who mainly plays as a midfielder, he can also operate as a defensive or attacking midfielder and on either flank. Moutinho represents the Portuguese national team at four European Championships, one UEFA Nations League finals, and two FIFA World Cups. Moutinho has been used as a deep-lying central midfielder for most of his career but he has been known to play behind the striker and on either flank. He is widely credited for an excellent range of passing and he has an eye for goal. he is the last footballer in the list of Top 10 Portugal Football Players.

1.Who is the best footballer in Portugal?

Cristiano Ronaldo is the best footballer in Portugal.

2.Who is the highest goal scorer in Portugal?

Cristiano Ronaldo is the highest goal scorer in Portugal.

3.What is Portugal famous for?

Portugal is famous for its Port Wine.

Published in A to Z, Game, News, Personality and Sports