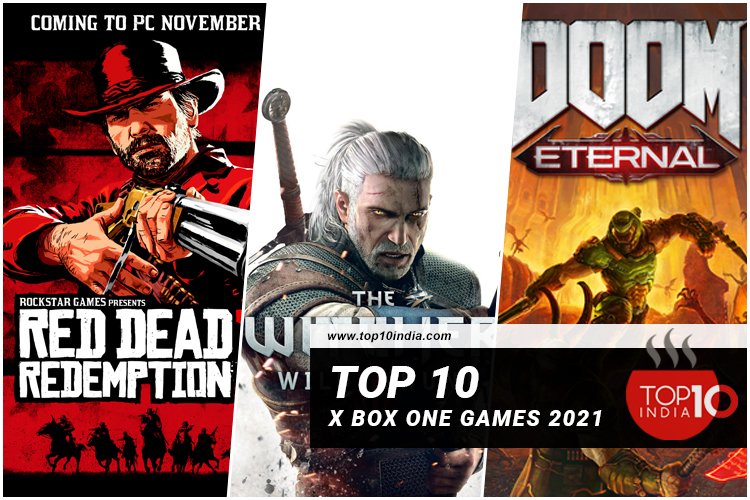 List of Top 10 X Box One Games 2021: There is a huge variety of gaming consoles in the market today. Many are outdated, and many are too expensive to buy. But the die heart gaming fans love them all. They play on the older version of these to play the classic games to feel the nostalgia, and they buy new ones to play the latest games available on that platform. X- box one is also one of those consoles that offer a huge variety of cool games that one can play. It was launched in 2013 as a successor of X-box 360. It is available in a different version in the market right now, but the big question is, what are the games available on it to play, or what are the top games to play on this console. There are tons of good games available in the market right now, but of course, you cannot buy them all. So, that’s why a list of top ten X-box one games is provided here that should be given a try. So, without further ado, let’s get started.

Our number one game on the X-box one is the “Red Dead Redemption 2”. No other game offers an open-world experience like this one and can easily be the gold standard for the games of this category. The lead character and his group of wild cowboys in the late west feel like real people facing real problems. From the moment you ride on your horse, you can almost do anything like a real-world situation, and the game’s possibilities are endless like a real world. You can go to a bar and enjoy yourself with your buddies, and at the next moment, you can fight a group of bandits. The graphics and dialogs are a cherry on the cake. And if you have an X-box one, then you must add this to your collection of games.

At number two, we have “The Witcher 3: Wild Hunt”. This one is an exceptional game, and it is really something else. The adventure of this dark fantasy world is full of surprises. Dragons, monsters, magic, adventure, storyline, you name it, and it has all. The game contains some disturbing and hilarious scenes. Old Medieval time feel & content and a totally different world to get lost into. This is one of the highest-rated games on play score and definitely deserves a second spot in our list.

The newest installment of the “Doom” series and definitely the best first-person action shooter game of all on the list. The Doom is back, and this time he is taking his rampage to the earth. It has maintained its quality of shooting experience and adds a ton of new mobility for those who found the earlier version of the game a bit slower. The gameplay revolves around the same plot. You are a one-man army, and you are sent to purge the planet of demons. Continues to walk to a different level and a variety of weapons and monsters to take on. Doom eternal is a must-play for gamers who love some nasty gore and killing action.

Horizon 4 is the most versatile and best racing game of the “Forza” series. Its open-world gameplay has really become a staple of Microsoft’s prized racing series. This provides the best racing experience in the fictional world of Great Britain, and it is totally addictive. The real physics and graphics of this game are a thing to watch. Along with racing, it is also full of surprises with other things in it. The game is being considered the best racing game to date.

Generally, in open-world games, one problem occurs: the game struggles to overcome the tension between the writers’ stories and the story players create by themselves. But this game is an outstanding achievement in this aspect as it accommodates both masterfully, allowing neither to undermine the other. It gives you full freedom to explore the locations like the real world, and you can do anything in the game almost anything. This game is a leap forward in gaming history due to its endless possibilities. The game is a post-economic crises satire on America and shows a glimpse of the dark culture, crime, and mafia.

With an extremely horrifying atmosphere and moments of extreme tension, this game not only has one of the best graphics and story but is not for faint-hearted people—the remake of 1998 Resident evil with a ton of new content. The sound and face graphics are the best of the zombie games on X-box or any other platform. You play as Leon or Claire exploring low-light hallways, solving silly puzzles, and fighting zombies throughout. The game revolves around solving mysteries and survival and is a must-play if you love zombie games.

I wish there can be more games like “Control.” A sharp story of a well-thought-out world with a great place presence and the lead character with a set of awesome and varied psychic combat abilities is awe-inspiring. The storyline goes with interfering with the federal bureau of control as Jesse Fadden. The headquarters seems like a non-script building where Jesse tries to find out questions related to her past. The lead character has powers somewhat similar to the Jean Grey from the X men. This is a really action-packed game in which Jesse uses his powers to fight the bad guys and seek answers to his questions.

The game has all fantastic monster fights, split-second swordsmanship, awesome graphics, and secret-filled areas. Sekiro, the lead character, is an absolute beast thanks to the swiss army knife of prosthetic arms, part grappling hook, part gadget kit, part weapon, and all come handy in combat. The game is full of adventure with silent ambushes and assassinations, quick dangers, and various mythical environments. Sekiro’s skills are more like spiderman, and it is a real entertainer to play.

Gears 5 has managed to surprise people both in its gameplay and its story. This is another entry of a first-person shooting game to our list with a broad set of multiplayer modes that range from trusty stalwarts to old and spicy new takes on both co-op and competitive gameplay. This can also be played in single or multiplayer mode with the team raiding various locations to fight the monsters. This was considered the best game of the year of its launch.

Finally, at number 10, we have the “Ori and the will of wisps,” which is every bit graceful and lovely as its predecessor. Even the emotional beats and exploration feels a little less after the first installment. It starts exactly where the previous one left it. The gameplay revolves around the new family member, “coup,” who wants to fly, and Ori wants to help him. Soon they are swept in a gale to a new forest, which begins their adventure. With awesome colorful display, locations to discover, and the soundtrack of this game is a thing to listen to.

Before we reach our conclusion, some honorable mentions could have been included in the list if it was top 20. They are – Metal Gear Solid 5: The Phantom Pain, Assassin’s creed odyssey, fallout 4, Fortnite, Minecraft, Call of Duty: Warzone, and Halo 5. So, here is our list of the top ten X-box one games. If you haven’t played them yet, then you should probably go and get them because loads of entertainment is waiting for you. (List of Top 10 X Box One Games 2021)

Published in A to Z, Electronics, Gadgets, Game and Tech