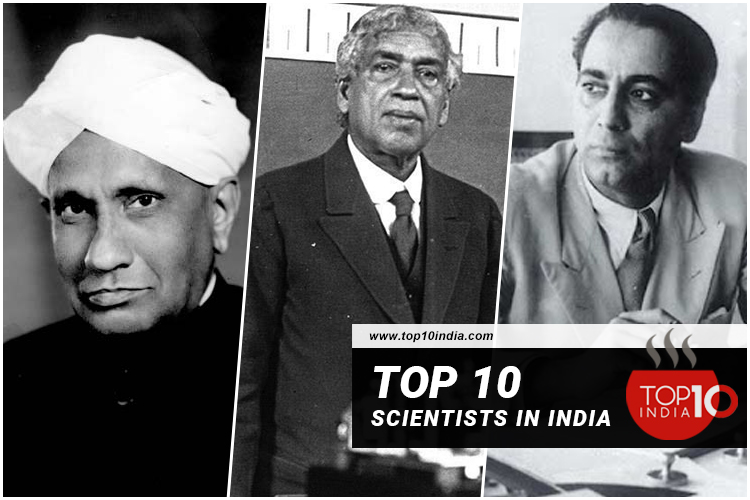 Top 10 scientists in India:- Science is an inevitable part of life. Scientists are curious persons who invent new things and observes how things work. Scientists like to resolve problems by doing experiments. Many scientists worldwide work and research in their respective areas like astronomers, botanists, Physicists, Chemists, Biologists, Geologists, etc.

India is a developing country with a vast history of geniuses and scientists whose work in science and technology has been highly appreciated across the world. Some Indian scientists have changed the world with their innovations and created history by setting standards for creativity.

Sir Chandrashekhar Venkata was an Indian physicist known mainly for his work in the field of light scattering. With his student K. S. Krishnan, he discovered that when light traverses a transparent material, some deflected light changes wavelength and amplitude. This phenomenon was a new type of light scattering and was subsequently termed the Raman effect (Raman scattering). Raman won the 1930 Nobel Prize in Physics and was the first Asian person to receive a Nobel Prize in any branch of science.

Jagdish Chandra Bose was a biologist, physicist, botanist, and early writer of science fiction. He pioneered the investigation of radio and microwave optics, made significant contributions to plant science, and laid the foundations of experimental science in the Indian subcontinent. IEEE named him one of the fathers of radio science. Bose is considered the father of Bengali science fiction and invented the crescograph, a device for measuring the growth of plants.

Shrinivas Ramanujan was an Indian mathematician who lived during the British Rule in India. Though he had almost no formal training in pure mathematics, he made substantial contributions to mathematical analysis, number theory, infinite series, and continued fractions, including solutions to mathematical problems that considered unsolvable.

Sir M. Vishvesvaraya, commonly known as Sir MV, was an Indian civil engineer, statesman and the 19th Diwan of Mysore, serving from 1912 to 1919. He pursued his degree from one of the best and the 3rd oldest engineering college in Asia, the College of Engineering, Pune. MV received India’s highest honour, the Bharat Ratna, in 1955. Vishvesvaraya was knighted as a Knight Commander of the British Indian Empire (KCIE) by King George V to contribute to the public good.

Avul Pakir Jainulabdeen Abdul Kalam was an Indian aerospace scientist who served as the 11th President of India from 2002 to 2007. Kalam was born and raised in Rameswaram, Tamil Nadu and studied physics and aerospace engineering. He spent the next four decades as a scientist and science administrator, mainly at the Defence Research and Development Organisation (DRDO) and Indian Space Research Organisation (ISRO) and was intimately involved in India’s civilian space programme and military missile development efforts. Moreover thus came to be known as the Missile Man of India for his work on developing ballistic missile and launch vehicle technology.

Vikram Ambalal Sarabhai was an Indian physicist and astronomer who initiated space research and helped develop nuclear power in India. He was honoured with Padma Bhushan in 1966 and the Padma Vibhushan in 1972. He is internationally regarded as the Father of the Indian Space Program

Acharya Sir Prafulla Chandra Ray was an eminent Bengali chemist, educationist, historian, industrialist and philanthropist. He established the first modern Indian research school in chemistry and is regarded as the father of chemical science in India.

Satyendra Nath Bose is an Indian mathematician and physicist specialising in theoretical physics. He is best known for his work on quantum mechanics in the early 1920s, collaborating with Albert Einstein in developing the foundation for Bose-Einstein statistics and the theory of the Bose-Einstein condensate. A Fellow of the Royal Society, he was awarded India’s second-highest civilian award, the Padma Vibhushan, in 1954 by the Government of India.

Subrahmanyan Chandrasekhar was an Indian-American astrophysicist, Astronomer and Physicist who spent his professional life in the United States. He was awarded the 1983 Nobel Prize for Physics with William A. Fowler for “theoretical studies of the physical processes of importance to the structure and evolution of the stars”. His mathematical treatment of stellar evolution yielded many of the current theoretical models of the later evolutionary stages of massive stars and black holes. The Chandrasekhar limit is named after him.

1. Who is the first Asian scientist to win a noble prize?

CV Raman is the first Asian scientist to win a noble prize.

2. Who is known as the Missile Man of India?

Dr APJ Abdul Kalam is known as the Missile Man of India.

3. Which scientist worked with Einstein?

4. Which scientist lived most of his professional life in the USA?

Subrahmanyan Chandrasekhar scientist lived most of his professional life in the USA.