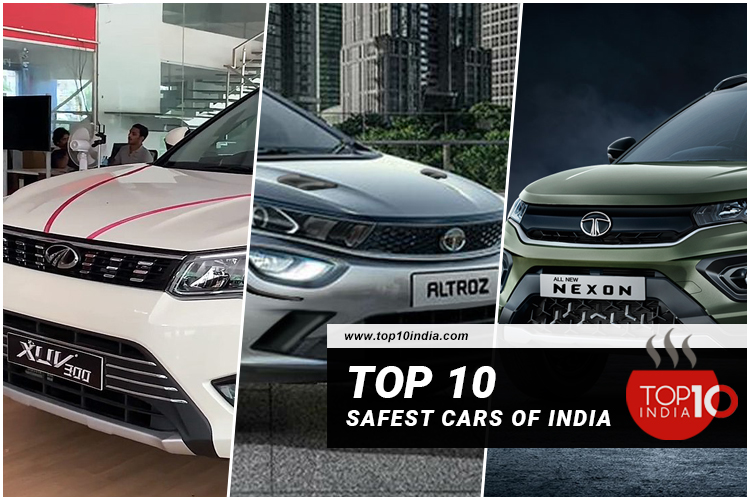 Top 10 Safest Cars Of India: Mahindra XUV300 is the Number 1 safest car of India to have scored 5 stars from the Global NCAP and has all the necessary and the best features a car must-have. Cars were first considered as a luxury, but it has now become a necessity. But be it yesterday, the present day, or tomorrow, at any day, safety is the necessity and priority of everyone. The Renault Triber is the car model made and sold in India, is tested by vehicle safety watchdog Global New Car Assessment Programme (NCAP), and has scored four-star ratings in the crash tests.

#SaferCarsForIndia is the campaign launched in India to create awareness and make the masses consider the safety provided by the car models. Under this campaign, Global NCAP, in the last few years, successfully conducted over 40 crashes. Various models were tested and have scored from an abysmal zero stars to an awe-inspiring five stars.

We’ve tried to get together the highest scores registered by all models which are tested to date and give you a list of the top 10 safest cars of India that are rated by Global NCAP.

The Mahindra XUV300 in early 2020 became the car that turns out to be the third made-in-India vehicle to score a full five stars in the Global NCAP crash tests. It secured the highest score for an Indian vehicle in the Global NCAP tests, racking up 16.42 points for adult occupant protection out of a total of 17.

The first made-in-India model to get a full five stars from Global NCAP is The Tata Nexon. A fact about this model is that when it was first tested, it scored a four-star rating, but the carmakers remodified it to get full scores. The additional feature made was that they fitted it with a seatbelt reminder system as standard.

The first and the earliest model of MPV, which scored four stars in Global NCAP’s #SafersCarsForIndia crash tests, was the Mahindra Marazzo. Adult occupant protection scored 12.85 points out of a potential 17, which is the highest AOP score to date secured by a four-star-rated vehicle.

The Volkswagen Polo was the car model which was well-reputed as it was the first made-in-India car that scored four stars from Global NCAP. This model is now over a decade old in its current form, but the Volkswagen Polo still maintains itself in India’s list of safest cars.

The Tata Tigor scored soberly on child occupant protection, even though it does not have the ISOFIX child seat mounts. Coincidentally it was on the same day that the Tata Altroz was rewarded a five-star rating; the Tata Tigor, too, got a big change in the way of a four-star rating in the Global NCAP crash tests.

The Tata Tiago is the car model which is considered largely identical to the Tigor. It was rewarded an identical four-star rating in the Global NCAP crash tests. Tata’s entry-level hatchback was most importantly modified as part of a midlife upgrade that spontaneously happened with implementing BS6 emission norms. It also scored the for adult occupant protection as Tigor, which was the same as 12.52 points out of a potential 17.

Among India’s top 10 safest cars, The seven-seater Renault Triber, as of 1 June 2021, is only the second MPV sold in India and is the first model from French Carmaker. This car is awarded a four-star rating in the Global NCAP crash tests. On the adult occupant protection front, this car model managed to score up a four-star rating.

Which is the No 1 safest car in India?

Mahindra XUV300 is the No 1 safest car in India.

Which car brand is safest in India?

Maruti and Tata is the safest car brand in India.

Maruti Suzuki Vitara Brezza is the safest car in India 2021.

Published in A to Z, Brands, Electronics, Others, Social and Tech