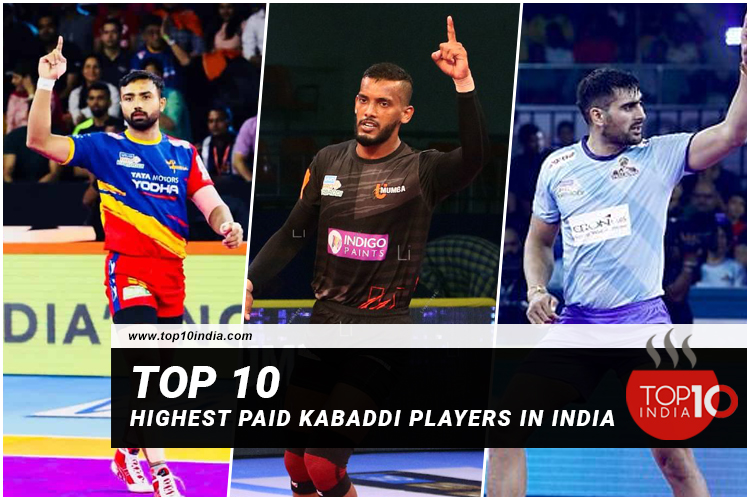 Top 10 Highest Paid Kabaddi Players In India | Greatest Kabaddi Players in India: Monu Goyat, without any doubt, is India’s highest-paid kabaddi player, having scored 45 points in do-or-die raids, making him the second-most effective raider in such situations. Monu Goyat was purchased for a record-breaking amount by Haryana Steelers at the Pro Kabaddi League Season 6 auction in 2018, making him the highest-paid kabaddi player in India, a good amount of Rs 1.51 crore.

Iran, South Korea, Thailand, and other countries have recently taken up kabaddi seriously. This sport began to draw the attention of young people. Because of the growing popularity of pro kabaddi, young boys began to prioritize kabaddi as a career option. If you’re wondering how much kabaddi players make, this article will provide you with the answers.

Monu Goyat is the richest kabaddi player in India, according to the Pro Kabaddi Auction prize. Monu Goyat has purchased for INR 1.51 crore by Patna Pirates in the Pro Kabaddi League 2018. In PKL 5, he performed admirably. As a result, the Patna pirates choose him first and foremost.

Second Richest Kabaddi Player In India, Siddharth Desai, made his debut with the U Mumba team in season 6. He did so well in season 6 that the Telugu titans invested the most money on him in season 7. He won the Best Debutant Award for his excellent performance in Season 6. In the sixth season of the PKL, he scored 221 points in 21 games. In season 6, his total raid points per match were 10.38.

Telugu Titans’ backbone is Rahul Chaudhary, the highest-paid kabaddi player in India. As a result, the team paid a large sum to keep him in season 6. Rahul Chaudhari is a professional Kabaddi player from India. He began as a Defender before transitioning to a Raider. He was a part of the Indian National Kabaddi team that won the 2016 South Asian Games gold medal. Rahul now plays for the Tamil Thalaivaa after six seasons with the Telugu Titans.

Deepak Ram Niwas Hooda is a professional Kabaddi player from India who also serves as the captain of the national kabaddi team. At the 2016 South Asian Games, he was a member of the Indian team that won gold. In addition, he has appeared in every season of the Pro Kabaddi League.

Famous Kabaddi player In India, Deepak Niwas Hooda was a member of the Haryana team that won gold at the Senior National Championships in Patna in 2014. He made his national team debut at the 2016 South Asian Games, where he helped his team win gold.

One of the richest Kabaddi players in India, Nitin Tomar is a professional kabaddi player from India. He is the franchise leader in Season 5 of the Pro Kabaddi League and a member of the Indian Kabaddi Team (men’s division). He plays for the Puneri Paltan squad. Nitin Tomar rose to prominence following the 2016 Kabaddi World Cup, when he saved India in a life-or-death raid against Iran and helped them win the match.

He played for U Mumba for the first four seasons of the league before being signed by UP Yoddha. He is one of the league’s most prolific and sought-after players, with 449 points in 80 games. Rishank was also a member of the Indian team that won the Dubai Kabaddi Masters 2018.

Rishank began playing kabaddi when he was seven years old. Everyone could see his talent and power even at that young age. He chose to take kabaddi seriously when he was in school. His body power differed from that of the majority of his teammates. It wasn’t simple juggling studies, kabaddi practice, and all of the financial aspects.

Fazel Atrachali was born in Gorgan, Iran, on March 29, 1992. He began playing Kabaddi at the age of eleven. When he was in school, he preferred to play football over Kabaddi. Fazel had to leave his hometown after a few days due to some factors that harmed his game, but after daily practice, he was selected for his country’s participation in the 2010 Asian Games.

Fazel worked as a blacksmith in his hometown as a side job in addition to Kabaddi. Fazel is one of the league’s most famous players.

Rahul Chaudhari is a professional Kabaddi player from India. He began as a Defender before transitioning to a Raider. He was a part of the Indian National Kabaddi team that won the 2016 South Asian Games gold medal. Rahul now plays for the Tamil Thalaivaa after six seasons with the Telugu Titans.

Mahender Singh, a defender, is ranked ninth on the PKL Season 7 highest earner list. Bengaluru Bulls bought Singh for Rs. 80 lakh in the auctions. With 57 Tackle Points from 22 games, Mahender Singh was the most effective Left Cover defender in Season 5.

In a Season 5 league stage game against U.P. Yoddha, he had 10 tackle points, including two Super Tackles. In 2018, Singh was a member of the third Federation Cup-winning Services squad.

Vikash Khandola is ranked tenth. In the PKL 2019 top earner ranking, Vikash of Haryana Steelers is ranked 7th with 77.83 lac. Vikash’s old franchise has retained him with a lion increment of 30.83 lacs. Vikas Khandola’s signature move is the running hand tap, and only five raiders scored more super raids in season 6 than him.

Kabaddi’s popularity has gradually grown over the years, and it is now India’s second most successful sport, behind the Indian Premier League (cricket). According to IKF, the most active teams are India, Iran, Pakistan, Thailand, and Bangladesh.

The teams, as well as Kabaddi, are living the life of a celebrity. Kabaddi fans display their love and affection for the players both on and off the mat with great enthusiasm.