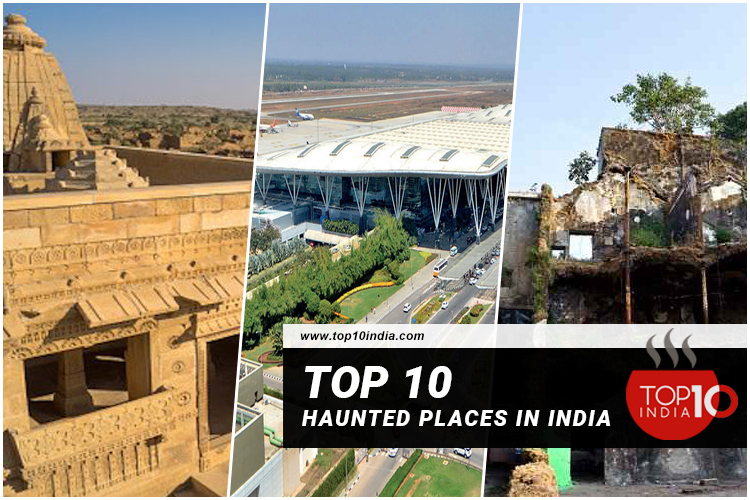 Top 10 Haunted Places In India | Paranormal Activities Places: Kulkdhara, Rajasthan, is the number 1 haunted place in India that the people mostly visit for the fort, leaving them haunted. Most of us are intrigued by a haunted story. We may or may not see the concept of something eerie but can sense its presence as both fascinating and terrifying. Each of the haunted places in India has its own terrible history or mythology. They range from desolate forts, abandoned villages, closed mines, and creepy hotels to unusual locations like courtrooms and schools.

Would you dare to visit these haunted locations in India? Encounter the troubled ghosts who refuse to leave this world? These haunting locations in India will put your courage to the test. India’s horror stories are diverse, but they all have the potential to scare the living daylights out of you! The presence of ghosts and spirits has been discussed for ages. However, we form our judgments based only on our own personal experiences. Well, here is the list of the top 10 haunted places in India.

Both for Indians and foreign visitors. Most visitors come to see the royal palaces and fortifications. Many are also captivated by the mysterious stories that circulate. Make friends with a local or offer them a modest fee, and stories will flow. If you’ve already taken a royal tour of Rajasthan, come to Jaisalmer to see the haunted lovely Kuldhara village.

Mukesh Mills is a well-known filming site for TV shows and Bollywood movies. Mukesh Mills is located in Mumbai’s posh Colaba neighborhood, which transports you back in time with its decaying construction and warehouse-like appearance. However, the decrepit structure is likely to send shivers down your spine because of the haunted events that took place here.

When Mukesh Mills first opened its doors in the 1870s. It was a successful mill later. It closed down in the 1980s as the workers went on strike and a fire took place, and the mill was never rebuilt but is to date believed to be haunted.

Princess Wilayat Mahal, a descendant of the royal house of Awadh, was handed Malcha Mahal by the government. It was a hunting lodge erected by Feroz Shah Tulaq before she moved in. The British seized Princess Wilayat’s property, leaving her destitute with two of her children. She fought the Indian government for years to reclaim her land, but nothing occurred.

She landed with her children at a Delhi railway station and occupied the VIP lounge as part of her protest. They stayed there for nine years before the authorities approved her Malcha Mahal.

The princess and her children arrived at Malcha Mahal only to be disappointed by the state of the place. It was absolutely unsuited for any human. Finally, the princess became so miserable that she killed herself by swallowing crushed diamonds. Leaving behind her two children, pets, and some of her money.

Before it was discovered, the little children clung to her body and slept with it for days. The body was then burnt beside the house. The kids grew up in the same house without any outside assistance and haven’t left since. They continue to live there, unaffected by the presence of other living beings. The dogs guard the house against invaders.

Bajirao I had Shaniwar Wada erected for him in 1730. After Shahu named Balaji Vishwanath Peshwa. However, in 1828, the fort was destroyed by an unexplained fire that destroyed a substantial portion of its structure. The portion that has survived is still open to tourists today.

People who reside near Shaniwar Wada, on the other hand, regularly whisper about the attraction’s eerie past. Shaniwar Wada is located in Pune’s Shaniwar Peth. It remains open to tourists from 8 a.m. to 6.30 p.m.

Ramoji Film City, Hyderabad, has been the location for several films. The team has a unique narrative to share. There have been reports of lights going out on their own or lightmen being pushed from vast heights by an unseen force, leaving them hurt. Not only these, but many actresses have reported having a supernatural experience in the green room. The spirits here seem to have a fondness for women, and they have ripped their clothes at times.

Guests who stayed in the Film City hotel have also had similar experiences. It’s not uncommon for doors to lock themselves or for half-eaten food is seen to remain in the room if you leave it for an extended period of time. Some guests have also heard weird voices and whispering.

Strange things have happened to several guests who have stayed at the Raj Kiran Hotel, Lonavala. No one knows exactly what they sensed. Many people have been kept awake at night by the sensation of being watched and the presence of someone or something in their hotel room. On the ground floor, near the reception, a special room is said to be haunted.

After several visitors protested, the hotel staff decided to lock it up and only rent it out to other guests when necessary.

Dow Hill has a lot of scary stories, each one scarier than the last. One depicts a headless boy wandering through the woods. Another depicts a woman wearing a sari as she walks about.

Victoria Boys High School, which is almost a century old and said to be haunted. It is also located on Dow Hill. Locals claim that even when the school is closed for the summer. They can hear children’s footsteps, shrieks, and laughter.

Three Kings Church remains towering, its reputation alive thanks to a haunted story. The village is not a well-known tourist destination, and most visitors are locals as people go to the church and surrounding neighborhood to see the sunset. Nonetheless, most of them flee before it becomes dark out of fear. It is not considered safe, and people already know stories that make this place haunted.

Bhangarh Fort is among the top 10 haunted places in India that were once considered one of the country’s architectural marvels. It was built for Man Singh I’s grandson Madho Singh I in 1573. Bhangarh, on the other hand, was named after his grandpa Bhan Singh.

Bhangarh was a thriving monarchy with temples, Havelis, and palaces. But it soon fell into disuse, and it now lies in ruins, abandoned, with only spirits roaming in the fort. Tourists can’t help but admire the architecture of what’s left of it and envision what it was like in the past. On the other hand, the eerie sign attracts their attention and forces them to return before the sunsets.

Which is the number 1 haunted place in India?

Kuldhara, Rajasthan, is the number 1 haunted place in India.

Which is the scariest place in India?

Shaniwar Wada, Pune is the scariest place in India.

Name a place in India for Paranormal Activities?

Published in A to Z, Destination, Entertainment, General knowledge, News and Sociology & Society