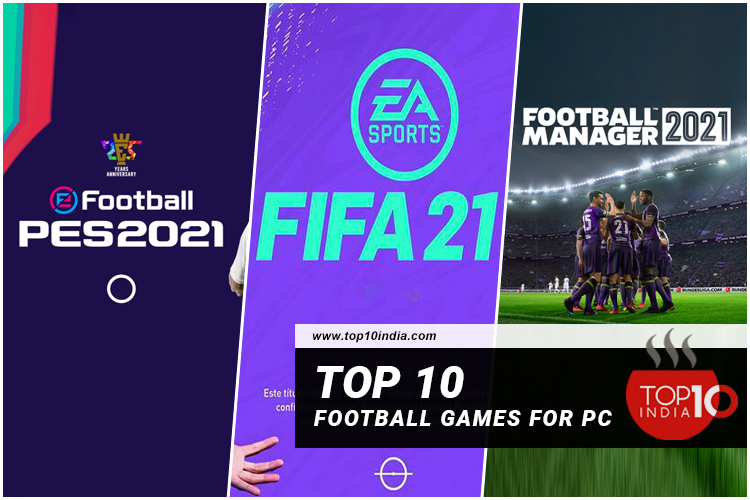 Top 10 football games for pc:- Football is one of the most popular sports on the planet, especially in Europe. Many people still don’t know what makes this sport so popular and special. The only thing that is as exciting as a 90 minute game for fans is football video games. Just like actual games, millions and millions of football fanatics spend hours on their console and other devices playing all sorts of stimulating football games.

In this list, we have mentioned the  Top 10 football games for pc. Playing football on PC and video games is a favorite pastime for many people. Here, you can play the type of football you only dream of to your heart’s content, and even thrash some of you friend too.

PES 2021- Pro Evolution Soccer is the season update version to eFootball Pes 2020 developed and published by Konami. It is the 20th installment of the PES series and will be released on Xbox One, PS4 and stream worldwide on 15 September and 17 September in Japan. The season update will contain the same gameplay and game modes as the previous edition but will contain the latest club restores.

FIFA 21 is a football simulation video game published by Electronic Arts as part of the FIFA series. It is the 28th installment in the FIFA series. FIFA 21 adapts to this environment with techniques, plays, and animations and with new settings and locations that will take players worldwide. This game mode includes quick matches, history modes, league, etc.

Football Manager 2021 is a football management simulation video game developed by Sports Interactive and published by Sega. It will be the first game in the series to appear on an Xbox platform since Football Manager 2008. It builds up a team spirit with players that feel good playing with each other, Live the matches most realistically, Take part in the league of over 60 different countries.

UEFA EURO 2008 is the official video game of the Euro 2008 football tournament, published by EA sports. It was developed by EA Canada and HB Studios and was released in Europe and North America on 18th April 2008 and 19th May 2008. Take control of your favorite European national squad and try to win the UEFA European football championship in UEFA Euro 2008.

Championship Manager is the first game in the Championship Manager series of the association football management simulation games. The game was released on the Amiga and Atari ST in September 1992. and ported to MS-DOS. Paul and Oliver Collyer wrote the game. Each division contained only 20 teams in the game, whereas, in real life, they contained 22 or 24 teams at that time.

Football club simulator 21 is a  football management video game in which the player takes control of a club, developed by the Spanish video game company FX Interactive and a continuation of the FX Futbol Saga. The Ruiz brothers, founders of Dynamic and creators of PC futbol. The latest version of the game was released on May 27, 2021, reaching the highest number of teams and players to date, 640 clubs and more than 17000 players. This latest edition also includes stability and performance improvements and the correction of some minor bugs detected.

Winning Eleven Online is an MMO Football video game based on Naver’s Pro Evolution Soccer series. It is the only available in South Korea. The game uses the engine’s PS2 games and somehow for the older PES engine.  Winning Eleven offers the chance to play an exhibition match with teams from England, Sweden, Spain, Italy, and the United States.

FIFA Online 2 is a series of online sports games developed by Electronic  Arts. Based on EA’s FIFA series of games, It is released with a Free-To-Play model focusing on the Asian video game market. In FIFA Online 2, a user can either play through a season or play against other online players. There are a few modes in the game league play, Multiplayer mode and World Tour.

International Superstar Soccer is a football video game developed by Konami for the Super Nintendo Entertainment System. It is known as the best soccer game available for any 16-bits system. A Simple, friendly match can be played against the CPU, another player, or just watched as the CPU controls both teams. The game uses the password system to save and load international cup and world series Euro Cup matches.

1.Which football PC game is the most famous and popular?

PES 2021- Pro Evolution Soccer is the most famous and popular game.

2.Which is the most rated football PC game?

UEFA EURO 2008 is the most rated football PC game.

3.Which is the most downloaded football PC game?

FIFA 21 is the most downloaded football PC game.

Published in A to Z, Electronics, Entertainment, Gadgets and Tech