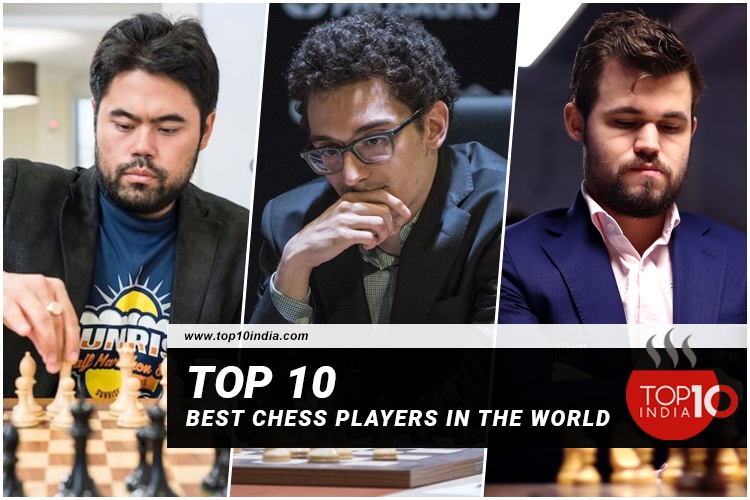 Chess will always be famous with those who enjoy a good fight. We don’t have to meet at the hospital afterward, and it’s more casual and personal than boxing, wrestling, or saber. Over the past 40 years, chess has been largely ignored. Chess is rated significantly higher than any other game or sport in terms of intellect, sophistication, strategy, perfection, and difficulty by both players and non-players. Find Below Top 10 Famous Chess Players In The World

At the age of 15, he was recognized as a chess prodigy, becoming the youngest American to achieve Grandmaster status.

Famous Chess Player In The World, Hikaru Nakamura is a five-time US champion, having won the Tata Steel Chess Tournament Group A in 2011 and having represented the US at five Chess Olympiads, earning a team gold medal and two team bronze medals.

Best Chess Player In The World, Fabiano Caruana had bestowed the title of Grandmaster in the history of both Italy and the United States in 2007 when he was 14 years old.

One of the top 10 best chess players globally, Magnus Carlsen, a chess prodigy, finished second in the World U12 Chess Championship in 2002. He won the Corus chess tournament’s C category at the age of 13 and became a grandmaster a few months later.

When Garry Kasparov was ten years old, he began learning the game. In 1985, at the age of 22, he defeated then-champion Anatoly Karpov to become the youngest ever undisputed World Chess Champion. He kept the official FIDE (Federation Internationale des Echecs) world title until 1993, when he established the Professional Chess Association in response to a dispute with FIDE.

Maxime Vachier-Lagrave was awarded the Grandmaster title by FIDE in 2005 when he was 14 years old. He won the French Chess Championship in 2007, just weeks after completing his Baccalaureat S, beating Vladislav Tkachiev 3-1 in a tie-break.

Maxime was ranked number two in 2016 after winning tournaments in Dortmund in June and Biel in July.

After defeating the-world No. 1 Garry Kasparov in the Linares tournament in 2003, Radjabov received international recognition. He then went on to win against former world champions Viswanathan Anand and Ruslan Ponomariov in the same year.

She is generally regarded as the all-time greatest female chess player. She has not played in any tournament since September 2015, having officially retired on August 13, 2014.

In 1991, at the age of 15, Polgár was named Grandmaster, becoming the youngest person to do so at the time, smashing the record previously held by former World Champion Bobby Fischer.

Viswanathan Anand is a former world chess champion and Indian chess grandmaster. He is one of the few players to have reached an Elo rating of 2800, which he first achieved in 2006. He was the first grandmaster from India, receiving the title in 1988.

He was known as a child for his lightning-quick playing pace, earning him the nickname “Lightning Kid” in the 1980s.In 2003 and 2017, he won the FIDE World Rapid Chess Championship, the World Blitz Cup in 2000, and many other top-level rapid and blitz tournaments.

Popular Chess Player In The World, Levon Aronian is an Armenian chess Grandmaster who received the Grandmaster title from FIDE in 2000.

On March 24, 2014, he was ranked second in the world by FIDE, with an Elo rating of 2830, making him the fourth-highest rated player in history. Aronian defeated Nakamura to advance to the finals of the Airthings Masters 2020.

Kramnik won the Classical World Chess Championship title in 2000 after defeating Garry Kasparov. In 2004, he successfully defended his title against Péter Lékó, and in 2006, he beat reigning FIDE World Champion Veselin Topalov in a unification match.

After that, Kramnik became the first undisputed World Champion since Kasparov left FIDE in 1993, winning both the FIDE and Classical titles.

Wrapping Up (Top 10 Famous Chess Players In The World)

Chess is a two-player board game that is both social and competitive. Chess is an abstract strategy game in which no detail is secret. Chess is now taught in schools all over the world to girls. Organizations such as the United States Chess Federation and the National Scholastic Chess Foundation hold tournaments regularly in many countries.