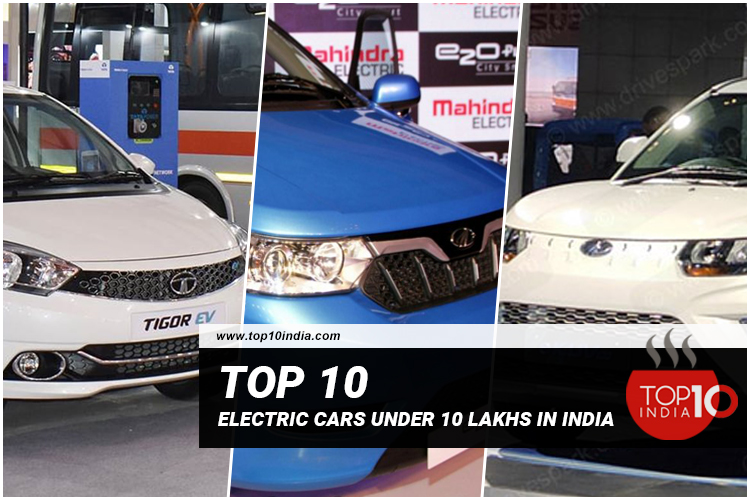 Top 10 Electric Cars Under 10 Lakhs in India: The concept of electric cars has been a huge success in multiple ways. For example, it plays like a booster in improving economic stability as the powers required are being generated by solar, wind, hydro, and other biofuel sources. It also plays a patent role in securing public health. Apart from all these benefits, it has a better energy efficiency compared to all other conventional cars.

In October 2019, Tata Motors launched Tigor EV for private owners. It is reported that this car will be the cheapest electric car for commercial users. The car scored four stars in adult occupant protection and three stars for child occupant protection in the Global NCAP test. The current price of this car is approximately estimated to be around rupees 9.58 Lakh.

It was reported to be the cheapest 4 doors electric car in the world with an automatic gearbox.

The Auto Expo released the new Ekuv100 mini SUV when Mahindra showcased its production. The estimated price of the model released by the company is around 8.25 Lakh; however, the market launch was delayed due to a Pandemic. The model will be introduced to the public by the end of June 2021.

The model has not yet launched in our market whose price has been estimated under 10 lakhs by the company. Tata motor has confirmed that the car will be launched by the end of 2022.

This model is not yet launched, where it has been caught testing in South Korea. Reports explain that Hyundai will also come with the electric derivative of micro SUV, price approximating under 10 lakhs.

Citroen will be increasing its sales by the end of this year. The model will be based on the e-CMP platform, which also underpins the electric Peugeot 208. The prices will be starting from Rs 8 lakhs (ex-showroom).

The model made its first appearance at Auto Expo 2020, showcasing its unique features and specifications. In China, It is also acknowledged as the Haima E1. By 2022, it will be heading to Indian showrooms.

It features a silhouette similar to hatchbacks like the WagonR and features a large touch screen infotainment system with an all-digital instrument cluster. The safety kit includes 2 airbags. The price of the car has been estimated to be under 10 lakhs.

Ora R1 will certainly boost the sales of the electric cars section in India and provide an alternative to the buyers to buy or purchase an electric car for them. When it launches, it will compete with other electric cars such as Tata Nexon EV, Hyundai Kona, MG ZS, etc.

We can anticipate the cost of this car in India will be from 6.23 lakhs-8 lakhs approximately.

During the 14th Auto stealing the attention at Renault India’s pavilion expo was its all-electric Renault Zoe Concept. In India, the company implied launching the EV by 2030 in tandem with the government’s aim to go all-electric.

However, Renault Zoe E-Sport is already on sale in numerous European countries. In India, it would be launched after it gets the appropriate infrastructure to support EVs. Now, if we talk about the price, in India, the Renault Zoe’s price is anticipated to fall in the range of Rs 7lakh – Rs 8 lakh.

The model is expected to arrive in India by early-2021. The 2021 Yaris will probably focus on the finest over its present price range of Rs 9.17 Lakhs (ex-showroom Delhi).

Tata Tigor EV is the best electric car in India because it is cheaper than other electric cars but fits to be the best for commercial purposes.

Hyundai Kona Electric 23.83 Lakh is one of the best electric cars in India.

Tata Tigor is the best small electric car in India.

Mahindra e2o PLUS at 7.48 Lakh is the cheapest electric car launched in India.

Published in A to Z, Automobile, News and Tech