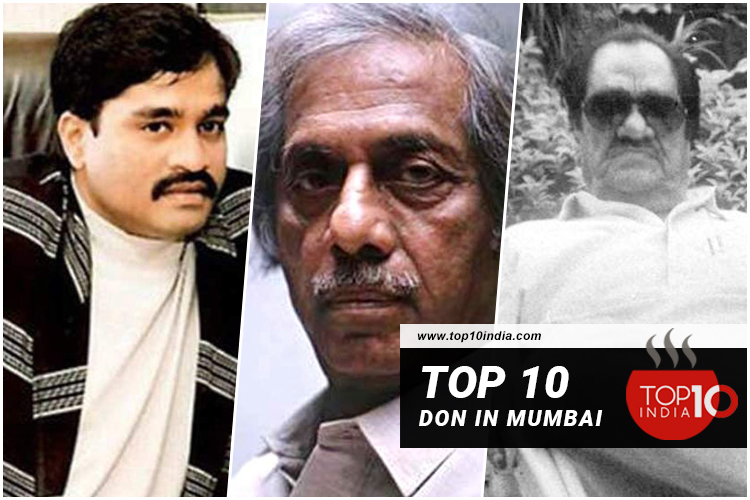 Top 10 Don In Mumbai: Dawood Ibrahim is the number 1 don in Mumbai. Basically, an Indian gangster known as a drug lord is a perilous man in Mumbai and a kingpin of D-Company. The city of Mumbai is also known as the ‘City of Dreams.’ It is filled with opportunities and is also known as the economic capital of India. This also made Mumbai an underworld hotspot. Many people came to Mumbai, asserted their dominance, and rose to fame as underworld ‘Dons.’

Mumbai has seen an era of different notorious dons who all had only one aim: to rule over the entire Mumbai City. But after the late ’90s, the Mumbai police started cracking down on these dons, which eventually led to them fleeing the country. Many of them fled to Dubai, Pakistan, and other foreign countries. Some of them were caught and extradited, while some are still at large. Let’s take a look at The top 10 dons in Mumbai.

Probably the most notorious and dangerous person who ever ruled Mumbai, popular don in Mumbai, Dawood Ibrahim is the kingpin of D-Company. His father was a police inspector and didn’t earn much. This eventually led to Dawood resorting to petty crimes. Dawood Ibrahim committed his first crime when he was only 15 years old. Dawood Ibrahim was already into pick-pocketing, stealing, and beating people.

After the 1993 bombings, Dawood Ibrahim fled India and has ever since been a wanted man by Interpol.

A famous don in Mumbai, Haji Mastaan, is also known as the father of the Mumbai underworld, and he singlehandedly managed to rule over the entire Mumbai City. This lands Haji Mastaan in the second spot on our Mumbai don list. Haji Mastaan moved to Mumbai in 1934 with his father when he was just 8 years old. They both ran a cycle repair workshop in Crawford Market.

With all the money Haji Mastaan had, he started financing Bollywood movies and became a film producer. Haji Mastaan’s life has also inspired movies like ‘Once Upon A Time in Mumbai’ and characters like ‘Vijay Verma’ in the blockbuster hit ‘Dewaar.’ Haji Mastaan was arrested during the 1970’s Emergency.

When Haji Mastan ruled Mumbai, the best don in Mumbai, Karim Lala was the second most powerful person and Mastan’s only rival. Karim Lala came to Mumbai in the 1930s and started his gangster career by settling disputes with the help of other Pathans. They smuggled gold, silver, electronic goods and also ran various gambling dens.

Abu Salem is a notorious convicted gangster and terrorist and lands a spot in our Mumbai don list 2021. Abu Salem was a prime suspect in terrorizing famous Bollywood personalities and celebrities.

Abu Salem was in the year 1988 when he assaulted a colleague over monetary issues. Abu Salem worked as a driver for the D Company from 1989 to 1993 and mainly delivered illegal cash, weapons, and drugs to various gang members across Mumbai. Abu Salem was also has involved in the 1993 bombings, after which he fled to Dubai.

Arun Gavli is popularly known as ‘Daddy’ by his followers. Arun Gavli is a former gangster who has turned to politics. Arun Gavli is the don of Mumbai from Byculla, Chinchpokli. People claim that Arun Gavli’s father, a milkman, was harassed by some local goons.

While Arun Gavli was in the gang, he was involved in kidnappings, murders, and extortions. After the death of Rama Naik in a police encounter in 1988, Arun Gavli became the leader of the gang based in Dagdi Chawl. Arun Gavli was arrested in 2012 and is facing life imprisonment for murder charges and various other crimes.

Rajendra Sadashiv Nikalje is popularly known as Chota Rajan. After the death of Bada Rajan, Dawood names Rajendra as Chota Rajan, who is also one of his top henchmen.

Chota Rajan left school and eventually ended up in the bad company. It was during this time that Chota Rajan was involved in many small crimes.

Chota Shakeel is known to be the right hand of Dawood Ibrahim and looks after all the dealings of D Company. He entered the gang after Chota Rajan left.

Maya Dolas, in our list of the top 10 dons in Mumbai, has inspired the famous movie starring John Abraham called “Shootout at Lokhandwala.” Maya Dolas was killed in an encounter by the police officer Aftab Ahmed Khan. It is alleged that as Maya Dolas rose to fame in a concise span of time, his encounter was ordered by Dawood Ibrahim himself.

Maya Dolas’s criminal career started in 1980 when he entered the Ashok Joshi gang, climbing through the ranks.

Among the top 10 dons in Mumbai, Fahim Mach-Mach was a part of the D Company and looked after its recovery business after the 1993 bombings when Dawood and Shakeel were under the police radar.

Dawood Ibrahim Kaskar is the biggest and most dangerous don from Mumbai. He has currently fled to Pakistan.

Haji Mastan was the first Don of Mumbai. Although he was a gangster, he never killed or beat anyone.

Some of them are Karim Lala and Varadarajan Mudaliar.

Yes, there are many dons in Mumbai.

Published in A to Z and Crime