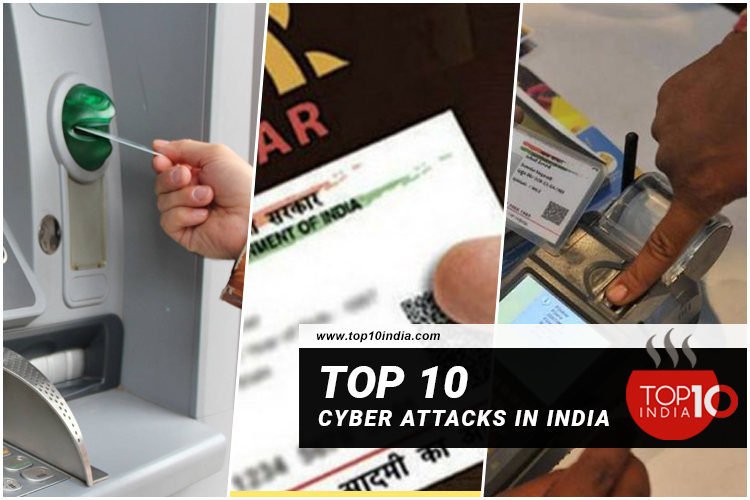 Top 10 Cyber Attacks In India | Top 10 Cyber Crimes: ATM system was hacked in India that is the number 1 cyber crime in our country and the general public had to face terrible problems. Do you know that India has the second rank amongst the countries affected by cyber-attacks between 2016-2018? According to a piece of information, there was a 22% increase in cyber attacks in India. India has dealt with the majority of attacks in the IoT section this year. India has been regularly facing cyber-attacks. In recent research, it was evident that out of the Indian cities, Mumbai, New Delhi, and Bengaluru have faced most of the cyber attacks.

Cybercrime causes a lot of financial losses to individuals and firms as well.  India has faced an increase of 7.9% in data breaches since 2017. Cyber attacks in India are an alarming issue because our country is in the fourth position out of the top 10 targeted countries in the world. Cybercriminals have adopted new cyber-attack ways for their targeted end-users. Further analysis showed that Chennai is the state in which there are more cybercrime attacks. Still even today people are unaware of cyberattacks. Here is our list of the top 10 cyber crimes in India.

It happened in mid-2018, that Canara bank ATM servers were aimed in a cyber attack. Nearly 20 lakh rupees were transferred from various bank accounts. According to the sources, there were 50 victims of this cyberattack and the culprits were able to gain ATM details of more than 300 users. Hackers used various developed devices to purloin information from debit cardholders.

2018 commenced with a huge data attack of personal records of 1.1 Billion Indian Aadhaar cardholders. UIDAI disclosed that around 210 Indian Government websites had leaked the Aadhaar information of people online. This caused a lot of trouble to the general public and later the arrangement was made to save the data.

Data revealed was inclusive of Aadhaar, PAN and mobile numbers, bank account numbers, IFSC codes, and more personal information of all individual cardholders. If it wasn’t enough scandalous, unknown sellers were selling Aadhaar details of any person for Rs. 500 over Whatsapp.

This incident happened in August 2018. It took 4 crore rupees from the bank accounts of various people who were fooled by two hackers from Navi Mumbai. They illegally using digital means to ask individuals to transfer money from their bank accounts. By deceptive gaining SIM card information, both hackers blocked individuals’ SIM cards and with the assistance of fake document posts, they followed out transactions using online banking.

They also tried to hack the records of various targeted firms.   Aforesaid stats and activities of the latest cyber attacks in India are the warnings for all those people and companies who are still unaware of the cyber threats. Firms need to implement cybersecurity measures necessary precautions.

No 6. Unacademy learns a lesson about security

This incident happened in May 2020. 22 million user accounts were affected because of this incident. Edutech startup Unacademy revealed a data delict that compromised the accounts of 22 million users. Cybersecurity firm Cybele said that usernames, emails addresses, and passwords were put up for vending on the dark web. Unacademy was founded in 2015, Unacademy is supported by investors inclusive of Facebook, Sequoia India, and Blume firms.

Jubilant FoodWorks, the parent firm of Domino’s India, told IANS that it had gone through such an information security incident, but did not accept that its customers’ financial information was leaked, as it does not save credit card details. The company website presents that it uses a third-party payment gateway, PayTM.

This incident happened in April 2021. As a consequence, all Upstox customers had to reset their passwords. Indian trading platform Upstox has openly recognized neglect of know-your-customer (KYC) data. Assembled by financial services firms to confirm the identity of their customers and check fraud or money laundering, KYC data can also be used by hackers to carry out identity theft.

Upstox regretted and said sorry to customers for the trouble, and sought to comfort them by telling them that this incident has been reported to the relevant authorities, and are also amplifying the security and boosting its bug bounty program to stimulate ethical hackers to stress-test its programs.

This incident happened in February 2021. Nearly 500,000 Indian police personnel were affected by this incident.  Personally identifiable information of 500,000 Indian police personnel was leaked on a database sharing forum. The culprit posted a sample of the data dump with the matter of 10,000 exam candidates with CloudSEK. The information leaked by the company shows that the shared information contained various personal details of the candidates.

Further research revealed that most of the disclosed data belonged to candidates from Bihar. This is the second example of army or police workforce data being disclosed online this year. In February, hackers obtained the information of army personnel in Jammu and Kashmir and leaked that database on a public website.

No 10. Disclosure of COVID-19 test results of Indian patients

Among the Top 10 Cyber Crimes In India, This incident happened in January 2021. At least 1500 Indian citizens were affected by this incident. So what happened was that the COVID-19 lab test results of many Indian patients have been leaked online by government websites. What’s precisely worrisome is that the disclosed data hasn’t been put up for sale in dark web forums, but is publicly obtainable governing to Google indexing COVID-19 lab test reports.

The leaked information was inclusive of personal details of the patients like patients’ full names, dates of birth, testing dates, and names of the centers in which the tests were held. First informed by BleepingComputer, the leaked PDF reports that displayed up on Google were hosted on government agencies’ websites that mostly use *.gov.in and *.nic.in domains.

What are the top 5 cybercrimes in India?

How does cybercrime work in India?

Cybercrimes are the wrong acts done by unofficial people in India that is illegal and crime in our language as the intentions behind it is wrong leading to cybercrimes.

What is the punishment for cybercrime in India?

According to section 66D of the IT Act, anyone who does a cybercrime is going to get a punishment that is extendable up to 3 years.

Published in A to Z, General knowledge, News, Social, Sociology & Society and Tech