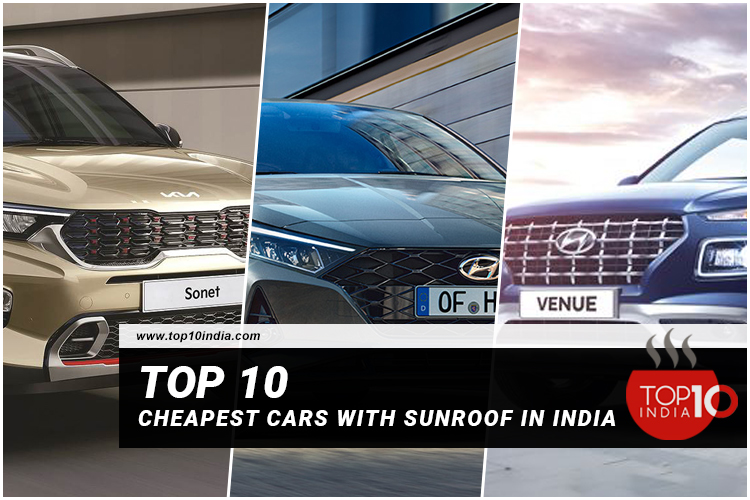 Top 10 Cheapest Cars With Sunroof In India: Kia Sonet is the number 1 cheapest car that you can buy in India with a sunroof and is priced at Rs 7.77 lakh in India. You aren’t a true Indian if you don’t enjoy some extra benefit or some extra features in the same budget and when it comes to a car we already look upon hundred of things to chose from in one perfect car for us. But when we get Sunroof it becomes like what more we need!

We all love to live our lives to the fullest. Windows are there but we can’t put our heads out of the windows and also they aren’t enough for us. To get the complete feel of everything we need Sunroofs. Kids especially enjoy the cars with sunroofs in India. So here is the list of the top 10 cheapest cars with Sunroof in India.

We get very upset when with all our savings we buy a car but the features of that car are disappointing but when the car has appropriate features then we feel that yes this car is worth it. So here is Kia Sonet number 1 cheapest car with sunroof in India with a market price of 7.77 lakhs. Kia Sonet car is one of the most impressive SUVs.

Very few car manufacturers in India, provide the surcharge compact improved sunroof. It is not only the Honda Jazz but also the new Hyundai i20 that gets this grandeur feature. The Korean carmaker Hyundai recently included its compact with a generation replacement.

Hyundai Venue costs between 7 lakhs to 11 lakhs, making it one of the affordable car with a sunroof in India. Hyundai venue is the first subcompact SUV offered by Korean manufactures that have sunroofs. Most of the customers are unaware of the fact that Hyundai Venue is the first to be termed as a value for money composition.

Tata Nexon is the car that marks the presence of Tata on the list. Tata Nexon car has a market value of 7.98 lakhs. Along with the list of fabulous features, the manufacturers have considered safety as a priority. Nexon is a sub-compact SUV with five-star ratings that it got during the Global NCAP crash test, for adult occupancy.

The upgraded version which the market got from Honda that has a feature of a sunroof is the Honda Jazz. Although this vehicle is quite expensive having a market value of 8.52 lakhs the features proves that the car is worth the price paid. Honda to convince more customers did the needful by adding some additional features.

Another car, the Ford Ecosport that is also a part of the subcompact SUV segment. Over time the Ford kept making required modifications in the Ecosport consistently hence it is still among the top-selling SUV of the country. By upgrade, we mean that the company mane numerous efforts to keep the Ecosport always modern and up to date.

Honda WR-V with a price of 9.70 lakhs is one of the cheapest cars with a sunroofIndia. The car comes with a good diesel engine but the petrol engine it has seems to be underpowered. But it isn’t like that the car has no feature other than the sunroof, the car is well equipped.

There aren’t many sedans that are offering sunroofs but one of the sedans offering it is the Hyundai Verna with a market price of 10.48 lakhs. This car is manufactured by Korean carmakers. Their previous model offered the feature of having a sunroof and so does the new revised and updated one!!

Old is gold is an old saying and proving it correct is the oldest sedan the Honda City. The car is priced at 12.61 lakhs. The car which is maintaining high standards for a decade now is this oldest sedan. Honda has always been an active part of the market by bring updated models. Like always Honda hit the market with something unique and distinctive.

Which is the cheapest car in India with a Sunroof?

Kia Sonet is the cheapest car in India with a Sunroof.

Which car is best with a sunroof?

Tata Nexon is the best with a sunroof.

Which Indian Car has the biggest Sunroof?

Honda WR-V has the biggest sunroof.

Which car is best under 10 lakh with a sunroof?

Honda WR-V is the best car under 10 lakhs with a sunroof.

Published in A to Z, Automobile, Brands, Business, Electronics, News, Social and Tech