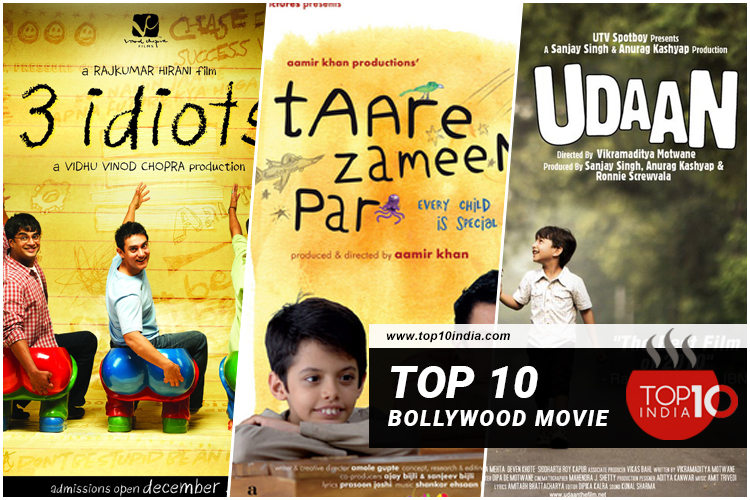 Top 10 Bollywood Movies: Are you a Bollywood Movies fan? Do you like to watch movies regularly and get lost in the world of Romance, Action, Drama, or Emotions? Well, you are not alone, as most people nowadays like to do this for entertainment as well as like a stress buster to relax a bit, every time they get a chance. So, what’s a better option than to watch a movie and leave your worry aside for some time. However, we all want to see only good movies to spend our valuable time and that is why we have prepared a top 10 must-watch Bollywood movies list that you will love and are worth spending your time on.

The list contains some of the all-time best Bollywood movies that have emotionally connected to the audience in one way or another and most importantly have a message towards society and individuals about facing the problems and reality of life. The list is as follows-

If we make a list of the best Bollywood movies of all time, this one will be certainly in the top 3 or maybe even on the top. 3 Idiots is a masterpiece that has every element like drama, emotions, comedy, tragedy, and most importantly how to deal with problems in life and how to see things in life. This is a story of 3 friends in an engineering college among which Rancho is the smartest and out-of-box thinker. The story revolves around various problems of student life and is a satire on the Education System of our country. If you have not seen this movie, then without any thinking just watch it before anything else.

You might drop few tears while watching this, as it is one of the best emotional films in the Bollywood industry. This is a story about a boy, Ishaan, who has the problem of dyslexia and due to which he continuously fails to score good grades in his school. His parents and teachers keep scolding him without having an idea about his problem but things get better for him as his new Art and Crafts teacher find out his problem and helps him to overcome his situation.

This one makes to the list not only due to good ratings and awards but it is certainly a fan favorite. The story highlights the problem of teenager’s career aspirations, clashing with the aspirations and values of their parents and society. This is a story about a young boy who wants to become a writer but is forced to work at his father’s factory after getting expelled from his boarding school. The movie contains the drama of the parent-child relationship and the emotional trauma that children may face at such young age.

One of the most lively, entertaining, and eye-opening movies on the list. The movie highlights the importance of living in the moment and adopting a “do it now” attitude before it’s too late. This is a story of 3 friends, Arjun, Imraan, and Kabir, who decides to go to Spain on a vacation for the Bachelor’s party of Kabir. All three, try to fight out their demons of fear and try to find out how to live a more meaningful life. In the movie, each one is having some past and present problems individually and they try to solve them by understanding that “You Live Only Once”.

This movie contains not only one but two very important messages. First, that girls can do anything that boys can do, and second, if you focus on your goal along with doing hard work, you will get success. This movie is based on the life of Wrestler “Mahavir Singh Phogat” and his daughters “Geeta Phogat” and “Babita Phogat”. The movie shows the difficulties he faces to train his girls as a wrestler in between the orthodox-minded villagers and the Sacrifices they make to reach their dream of winning the Gold medal for India.

“Dil Chahta hai” is a story of 3 best friends, Aakash, Siddharth, and Sameer who gets separated after college due to their work commitments. The movie focuses on the reality of life and how things change with age. The movie shows the love interest and work areas of all three friends and how they face new challenges in life. This movie is popularly famous for its songs and is said to be ahead of its time.

“Swades” is a story of an NRI, Mohan, who works in NASA. After his parents die in an accident, he returns to his hometown village to take away her childhood Nany with him to the USA. But things change when he looks at the poor living conditions of that village and also develops a love interest in Gita. Mohan decides to stay and work for the betterment of the life of people and realizes that there are more important things in life than money and success.

This movie is based on the life of sportsperson “Milkha Singh”. The movie is related to the time period after the Independence of India and the partition of India and Pakistan. It shows the various struggles of the life of Milkha Singh after he comes to India after the partition. The movie focuses on hard work, dedication, and will to overcome all obstacles to be an Olympian and one of the most celebrated athletes of India. The movie is a mix of serious Drama, Romance, and time to time light comedy.

This one is a pure romantic adventure with full-on entertainment. It is a typical Bollywood Masala movie with a love story, songs, drama, complications, and a happy ending. Aditya, a rich businessman gets heartbroken after his girlfriend marries someone else. He leaves everything behind and boards a train aimlessly where he meets a Punjabi girl named “Geet”. Situations keep them traveling together making them friends. They get involved in each other’s lives and develop love interests unknowingly. It is the kind of movie you would like to watch again and again.

This one is an absolute thriller that will keep you at the edge of your seats. The story goes in flashback when a retired police commissioner recalls his most memorable case when he received a phone call about a bomb in the city of Mumbai. The caller demands release of few terrorists otherwise threatens to bomb the city as he has planted them at various places all around the city. This movie goes around with a cat and mouse game to catch the caller but something unexpected happens which shocks everybody.

Q.1. Which is the highest-grossing movie in India?

Ans. “Dangal” is the highest-grossing movie in India with global gross figures.

Q.2. Which is the best must-watch movie in Bollywood?

Ans. “3 Idiots” is the best must-watch movie in Bollywood.

Published in A to Z, Brands, Entertainment, News, Social and Sociology & Society