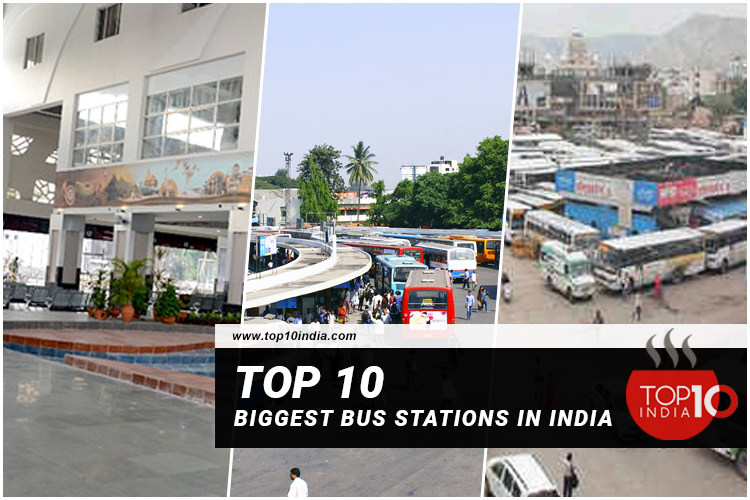 Top 10 Biggest Bus Stations In India: Vadodara bus station, Vadodara that was inaugurated by Narendra Modi is the number 1 biggest bus station in India. Buses are still the priority for Indians to travel to or out of cities or states. Buses are locationally favorable more than railways or airways. Also, buses are the option chosen by all the classes of society. Bus tickets are more affordable than train or aircraft tickets. People prefer to travel on buses rather than traveling via air crafts late at night.

Bus travel has been modified in recent years as the government is investing more and more funds for the up-gradation of bus terminus and bus stations across India. The state bodies are also developing new buses regularly and most of the long journey buses are now air-conditioned. As additional feature buses nowadays are offering free Wi-Fi on the journey. In recent times, the government has constructed several bus terminals. Here is the list of the 10 biggest bus station(stand) in India.

In the year of 2014, Prime Minister Narendra Modi inaugurated the Vadodara bus station. Nearly 114 crores were spent in developing the bus station which is a five-story building. Every day the terminal 30000 passengers who travel on 800 buses. The bus terminal has a very spacious commercial complex as it could 400 retail shops.

ISBT Delhi bus terminal in India connects 7 different states to Delhi and is also the largest bus station in terms of area. According to the sources, the bus terminal handles 66 buses on regular basis. Also, it connects 1800 buses every day. The bus terminal is well attached to the metro and a unique thing about this bus station is that once in a week a bus from here leaves for Pakistan.

Pandit Nehru Bus Station is situated in Vijayawada and it is also governed by Andhra Pradesh State Road Transport Corporation. Previously, the station was known as Telugu Satavahana Prayana Pranganam but later the authorities changed the name of the bus station.

NTR bus station is situated in Guntur in Andhra Pradesh. The bus station offers the passenger who wishes to travel within the city and to those who are willing to travel outside the city. The bus station was well constructed and is even today well maintained by the Andhra Pradesh State Road Transport Corporation. The buses from this terminal cover so many routes also one can easily ply buses for any route as the station has 52 platforms.

The KSRTC bus stand is situated in Hassan. Since regular modifications and changes are mandatory, this bus station was reconstructed and reopened in 2010. According to the sources, the station can accommodate nearly 250 buses. Over 34 crores of government were spent on the construction of bus stands.

In Madurai, Tamil Nadu, the Arappalayam Bus Terminus is considered to be one of the most significant terminals. The behind its importance is the fact that this terminal has the route which takes you to the big cities like Coimbatore, Tripura, and Dindigul. It is a government-constructed old bus terminal. This bus offers other facilities as well like medical dispensary, florist, two-wheeler parking, and eateries.

We all are well aware of the fact that Delhi is a state with a heavy population, and heavy population indicates the fact that every day huge amount of population travels in and out of Delhi. Roadways, railways, and airways are all overburdened there. To give better infrastructural facilities to the people there, the government came up with a new terminal in the Anand Vihar.

Which is the second biggest bus stand in India?

Which is the second biggest bus stand in Asia?

Which is the first bus stand in India?

ISBT, Kashmiri Gate is the first bus stand in India.

Published in A to Z, Others, Social and Sociology & Society