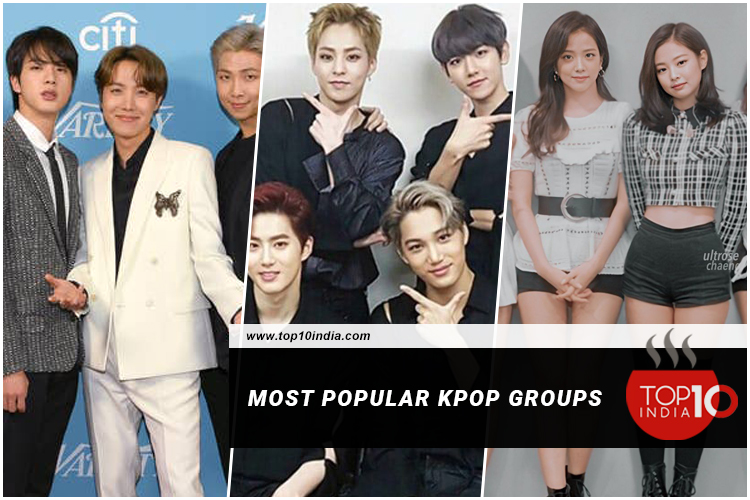 KPop Groups are the groups of singers, rappers, and dancers. These people make several albums and songs for young audiences. Here is the list of the most popular KPop Groups.

BTS ranks at the first position in the list of the most popular KPop Groups. The group is a seven Korean boys band, that was formed after the CEO of Big Hit Entertainment got impressed with their rapping. The group got attention from the people before their debut through social media platforms. On 12th June 2013, the group made its debut with the single album 2 Cool 4 Skool. The album peaked at number five in South Korea and sold over 145,000 copies. Their first Japanese studio album Wake Up in 2014. This song was ranked third on the weekly Oricon Album Chart and sold 28,000 copies. BTS has developed and maintained a style of fusion music with an emphasis on hip hop as its musical base. The lyrics of the group are based on themes such as the issues of social identity in youth, anxieties of school-age youth, and mental health in youth culture.

EXO is a South Korean-Chinese boys band. This band was formed in 2011 by SM Entertainment. The group debuted with twelve members separated into two sub-groups – Exo-K (Suho, Baekhyun, Chanyeol, D.O., Kai, and Sehun) and Exo-M (Xiumin, Lay, Chen, Kris, Luhan, and Tao). In 2015, the group started performing in one group. They also started performing in multiple languages. In 2012, Exo-K became goodwill ambassadors for South Korea’s Red Cross Youth. 2013, EXO released its first album ‘XOXO’, and it sold over one million copies.

Black is a South Korean girl group. The group made its debut in 2016 with a single album Square One. This group was formed by YG Entertainment when they were recruiting girls for a new group after launching its first major girl group 2NE1. The first album of the group charted at number one and two on the Billboard World Digital Song Sales Chart. In 2018, he released the first episode of their first reality show Blackpink House. In 2020, the group collaborated with Lady Gaga for her sixth studio album Chromatica. In December 2020, the group announced its collaboration with Youtube Music for their first Livestream concert. More than 280,000 people purchased a membership to get access to the show.

NCT is a very known South Korean boy group. At the starting of the group, it only had 2 members Mark and Jaehyun. Then seven more members were added to it. In 2016, SM Entertainment announced NCT’s first unit NTC U. It released its first digital singles The 7th sense. In 2016, another subunit was launched NCT 127. It released his first two music videos for Limitless and performed the song on M Countdown. NCT Dream and WayV are another part of this band. In May 2021, NCT Dream released their first studio album Hot Sauce.  The album exceeded more than 1.7 million copies in pre-orders.

Monsta X is a very famous South Korean Boy Group. This group was formed as the result of a survival program called No. Mercy. The name of the group contains the double meaning of Monsters conquering the K-pop scene and My star. In 2015, the group made its debut with the release of their first extended play Trespass and it consists of seven different tracks. In March 2020,  the group donated 100 million won to the Good Neighbors, a charity organization helping low-income families in South Korea. In 2021, the group became the global brand ambassadors for the cosmetics brand Urban Decay. The style of this group is intense or aggressive with elements of hip hop, EDM, and pop.

Red Velvet is a very amazing South Korean girl group. The group made its debut in 2014, with the digital single Happiness consisting four-member Irene, Seulgi, Wendy, and Joy. In 2019, the group released their first Japanese digital single, titled Sappy. In 2020,  SM Entertainment announced that Irene and Seulgi would form the group’s first sub-unit. The style of the band has two different sides – an intense and captivating, and feminine and soft.

Twice is a very famous South Korean girl group. The group was formed under the television program Sixteen made his debut with the extended play The Story Begins. The group got its stardom in 2016  with their single Cheer Up. In 2017, the group made its debut in Japan under Warner Music Japan. In 2017, the group represented 30 different brands including cosmetics, clothing, online and mobile games, food and beverages, credit cards, and more. In 2019, the group became the third female Korean act to chart into the Canadian Hot 100. In June 2021, the group announced that they are going to release an English digital single in September 2021.

Got 7 is a very known South Korean Boy Band. The group made its debut with the first EP ‘Got It’. The group was described as a hip-hop group that includes martial arts tricking and b-boying styles in their performance. In 2016, the group released their first full-length Japanese studio album titled Moriagatteyo. In 2018, the group was appointed honorary ambassador for Korea’s National Fire Agency. In February 2021, the group released a teaser for an upcoming single called “Encore” on a new YouTube channel.

Wanna One is a very popular South Korean boy band. The group made its official debut in 2017 at an event titled Wanna One Premier Show-Con that took place at the Gocheok Sky Dome. After this, the group also released their debut extended play One To Be One. In 2018, the group posted a series of teaser images titled 2018 Golden Age Begins. The group announced that the members will split into multiple units such as Dynamic Duo, Zico, Nell, and Heize. In 2018, the group ranked second on Forbes Korea Power Celebrity. In 2017, the group was featured in 16 advertisements including cosmetics, clothing, mobile games, foods and beverages and more.

Astro is a very known South Korean boy band. The name of this group and member were introduced in 2015. In 2016 the group made its debut extended play with Spring Up. In 2018, the group embarked on a fan meeting world tour visiting cities in countries such as the United States, Canada, South Korea, Japan, and Thailand. In 2019, the group released their first full-length album All Light. In 2020, the group released a special single album One & Only for their 4th-anniversary debut. In April 2021, released their second full-length album All Yours.

Who is the number 1 KPop group?

BTS is the number 1 KPop group.

Which are the most popular KPop groups?

In the above article, you can check out the most popular KPop groups.

Published in A to Z, Country, Entertainment, Others, Personality and Social