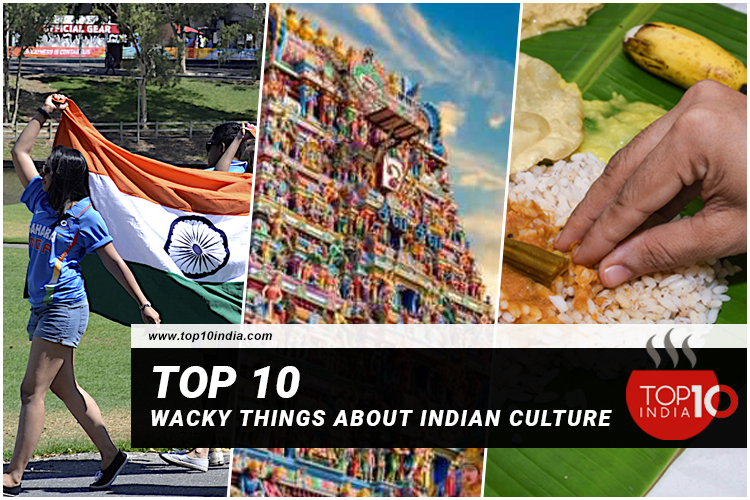 Top 10 Wacky Things About Indian Culture: Cricket is Life is the number 1 wacky thing about Indian culture that states that people in India consider cricket as a religion and the cricketers as God. The entire world knows that India is a diverse nation. Apart from diversity, India is popular for some bizarre rituals. Several communities, tribes, and religions are residing in India, and each community is treated with equality in India. Many of the Indian traditions are quite Bizarre for people residing in other countries. These traditions, apart from being bizarre, are unique, as well as only India does these.

No 1. Cricket is Life

For Indians, cricket is their life; it is literally nothing less than a religion for them. No matter what aged a person is in India, they are a big cricket fanatic. Even though cricket is not the national sport of India still, people here are crazy about it. Almost every city in India has cricket stadiums, and the sport is practised over there. The Board of Control for Cricket in India, also known as the BCCI, is the governing body for cricket in India. Almost 79% of televisions present in India are used for cricket telecasts; this number is quite massive.

Hinduism is said to be the most widely spread religion in India. Hind tradition is regarded as dharma or the way of living life by hind people. Also, history has evidenced that Hindu tradition is the oldest tradition being practised in the entire world. Hindu tradition includes some philosophies, sayings, and a lot more. Also, according to the Hindu tradition, women following it wear bindis on their foreheads. In addition, many pilgrimage sites are visited by people following Hindu tradition each year in the name of Karma.

No 3. Eating With Hands

It is believed in India that eating with hands aids your digestion processes and also promotes mindful eating. These reasons have been proved by scientists as well. The most important benefit that you get when you are eating with your hands is that there are negligible chances of burning your tongue as you get an idea about the temperature of your food well in advance. Apart from all these, the flora present in our hands when ingested with food helps maintain mouth, throat, and gut health. Digestive juices are also released when food is handled with the help of fingers.

Indians are quite well-mannered, and they avoid disrespecting others with their actions. One most commonly used action by Indians is head wobbling. Head wobbling is a notable gesture found in India. It can be side to side tilting of the head or simply forward and behind tilting. Indians use this gesture generally to indicate yes and no. apart from that; many people tend to wobble their heads while someone is trying to explain something. In that case, head wobbling means yes, they understand your point.

Bromance is actually not the perfect word for the relation between Indian men. Still, many people refer to it as bromance only. In Western countries, bromance is basically an expression used to depict the relationship between two men. That relation is basically referred to or is compared to homosexuality. However, in India bromance is the cordial behaviour of one man towards the other. They nicely meet each other and greet each other by hugging and shaking hands.  Bromance in India has nothing to do with homosexuality.

People worship cows following Hind religion or traditions. The cow is referred to as the mother by most Hindu people residing in India. India has more than 280 million cows. These cows are used for dairy productions, worshipped, and the cow dung is considered sacred in India. Also, many people use the urine of cows for medicinal purposes. This might sound a bit crazy, but here in India, it does happen. These cows are kept in places known as gaushalas, where they are fed and worshipped. Indians frequently visit these gaushalas to worship cows.

Weddings in India are carried out in different ways. All religions have their own way of conducting wedding ceremonies. In fact, the process varies from region to region as well. Each year India witnesses more than 10 million weddings. The best thing about weddings in India is their celebration method. Indians believe in conducting big fat weddings; they spend lakhs on wedding ceremonies. Also, the guest list is massive as compared to Western weddings. Out of the total weddings carried out in India each year, more than 80% are Hindu weddings performed according to Hindu traditions.

Chalk markings are also known as rangoli by Indians. Chalk markings are nothing less than pieces of art in India. Indians usually prepare them at the entrance of their houses or their doorsteps. It is said that chalk markings help create positive energy, and they also attract gods and goddesses. If someone steps on these chalk markings, it is believed to be an act of misfortune. Diwali is a festival celebrated in India; Diwali chalk markings are seen almost in every house. People also use colourful powders to decorate their chalk markings along with tea lights.

Charcoal ironing is an ancient technique used to iron clothes by Indians. These days charcoal irons are not present in many households, but laundry men still use this authentic ironing technique. A charcoal iron takes nearly 3 hours to heat up properly, and also it is quite heavy. Because of its weight, everyone cannot easily use it; only professionals can use it properly. Once the charcoal used to heat the iron is exhausted, new charcoal is filled in iron.

It is a bit surprising for the people residing in Western countries that Indians prefer thumbs up over Coca Cola. The taste of Thumps up is almost the same as Coca Cola’s, but the brand and packaging are different. Apart from the taste, both these beverages are similar in colour as well. People prefer drinking Thumps Up in India with snacks such as fritters and Pizza.

What is unique about Indian culture?

India is a land of diversity. It has numerous dance forms, numerous languages spoken, and people with several religious beliefs.

What is Indian culture known for?

Indian culture is known for the Dharmic religions being practised in India.

What are the weird things in India?

The wacky things about the Indian culture are the weird things in India.

What are the 3 interesting facts about Indian culture?

Published in A to Z, General knowledge, News and Others