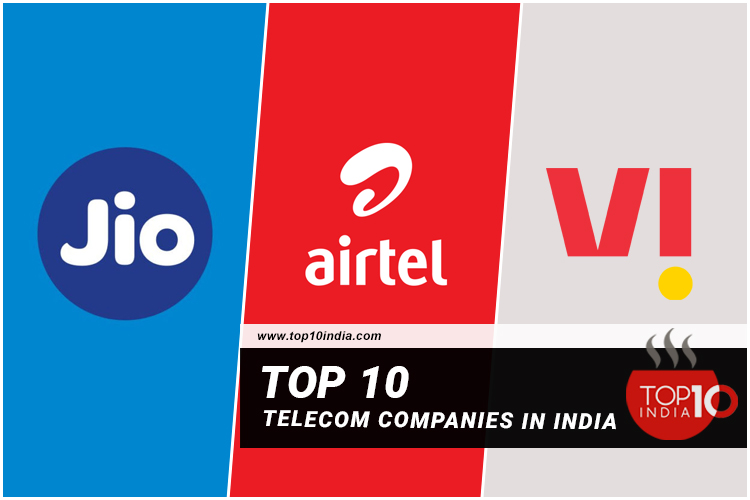 Top 10 Telecom companies in India | Service Provider List: India is the second-largest telecommunication market and has the second-highest number of internet users in the world. If you are traveling somewhere, you want to invest money, call, message almost every necessity in everyday life you can achieve it with smartphone having a good service provider. Due to the rapid rise of the telecom industry in the past few years, telecom companies in India are competing to gain more market share and customer base. Since last year, the growth of the Indian telecom industries has been exceptional after new key players entered the market like Reliance Jio. The below list of the top 10 telecom companies will help you to choose the best mobile service operator among the available.

JIO is an Indian telecommunication company founded in 2007 as a subsidiary of Reliance Company and became fully functional in 2016, having its headquarters in Mumbai, Maharashtra, India. The founder of Jio telecom is Mukesh Ambani, the richest person in India. It does not offer 2G and 3G services.; it only provides Voice Over Volte to provide voice service on its 4G network.  It is the only company providing Zero roaming charges, voice calls, and popular apps like Jio TV, Jiosaavn, Jiocinema at zero subscription cost. Reliance Jio is an entire ecosystem that allows Indians to live digital life to the fullest. It is one of the world’s largest startups with an investment of 1500 billion INR. Recharge plans are must less than the other operators. It offers a unique combination of telecom, high-speed data media, digital commerce, and payment services. It is now also offering JIO fiber with good speed and reasonable plans. The market cap of JIO is about 10 trillion INR. It has retained its crown of being the largest telecom operator in India, with more than 406 million wireless subscribers.

It is the second-largest telecommunication company in India, founded by Sunil Mittal in 1955. It is a global telecommunication service company that operates in 18 countries across Africa and South Asia, and the Channel Islands. It provides a wide range of mobile services like GSM, 3G, 4G, and 4G+. It was the first company to launch 4G in India and the first company to reach a base of 100 million customers base. The market cap of the company is about 293,999.99 Cr (INR). The company ranks almost in the top 3 mobile service providers globally in terms of subscribers, having more than 344 million subscribers. The company also offers Fixed Lines services, high-speed broadband, DTH, and national and international long-distance services to carriers. In September 2020, Airtel launched Xstream Fiber with speed up to 1Gps.

Vodafone Idea Limited, doing business as Vi, is an India Telecom Operator having its headquarters in Mumbai and Gandhinagar. On 31 August 2018, it was merged with Idea. After merging with Idea, it became one of the largest companies in India. It has fewer expensive recharge plans than other telecommunication services in India, but it provides one of the best network coverage and high-speed data to its users. It offers mobile services such as GSM, 3G, and 4G LTE. The ex-CEO of Vodafone Romania is the current CEO of the company. It has more than 286 million subscribers.

It is formerly known as Cellone, is a government-owned telecommunication company in India. The government started it in 2000; it provides Landline and broadband services. It is one of the most popular service providers as it offers fewer tariff plans and great accessibility across India. The organization is seeking to build its post-paid convenient client base by ten percent in the current budgetary year by pleasing the eye of the customers with its bill installment frameworks and making them more available. Currently, it is not having PAN India 4G rights and falls short in terms of internet connectivity compared to other countries. The market share of the company is about 9.9%. This company is the fourth-largest telecom service provider company in India. BSNL has more than 115.87 million subscribers. It is the only service provider making focused efforts & planned initiatives to bridge rural-urban digital in the ICT sector. The company aims to achieve a higher growth rate to become a profitable enterprise and provide quality and reliable fixed telecom service to their customers.

It was established in 1968 by the Government of India to upgrade telecom services, introduce new services, raise revenue of the telecom department and expand the telecom network. The market share of the company is around 0.29%. It is a fixed-line telecommunication service in the two metropolitan cities, Mumbai and Delhi. It is one of the biggest Government sponsored companies in India. It offers mobile services in Delhi, including four peripheral towns Gurgaon, Noida, Ghaziabad, and Faridabad. It is a government-funded telecom company that offers broadband internet and 3G services in Mumbai and Delhi. The market cap of the company is about 708.75 Cr INR. Having a subscriber base of more than 2.17 million people. It is one of the least used service providers in India. It is the second biggest administrator in Mauritius. The company is suffering losses because of the rise of JIO and trying to achieve its place back in the market.

It was an Indian mobile network operator headquartered in Mumbai that offered 2G, 3G, and voice services. It was founded by Chinnakannan Sivasankaran and commenced operations in Tamil Nadu in 1990. At its helm, it was prevalent mainly in southern and few parts of eastern India, with an enormous customer base, due to its low congestion network at very cheap rates and excellent customer support. It was once a leader in the markets of Tamil Nadu and had a considerable presence in Assam, Odisha, and North East. It offered poor network facilities to Delhi and NCR. It used radio link time-out technology, without which the call drop rates were higher, and many customers reported that problem. It was having a customer base of more than 90.32 million subscribers.

It is a BITC Cable Networks, is an Indian Cable Television service operator based in Mumbai. It was the first company to offer internet using the CATV network in India and was the first cable operator to launch a digital platform in 2006. It was the first to provide cable ISP in India. There are more than 11 million subscribers, out of which 1.77 million uses broadband internet facilities. It is one of the leading cable broadband service providers. It holds a PAN India ISP license, and it was the first cable television service provider to launch High-speed cable broadband services over 16 cities. It has been honored nine times with best MSO by the Indian Telly Awards for its quality cable TV and Broadband Internet Services.

Atria Convergence Technologies Limited was established in 2000 by Sunder Raju in Bengaluru. It is the Private equity firm India Value Fund Advisors (IVFA). It is the 5th largest internet service provider in India as of 2021. ACT has more than 1.8 million subscribers. It has its headquarters in Bangalore and Karnataka. ACT offers fiber to the home under the brand ACT Fibernet and digital television services under the ACT digital brand.

It was previously known as Citycom Network Pvt. Ltd. It has its headquarters in Gurgaon. It is an internet service provider which offers fiber optic broadband services to business, residential and enterprise customers in Delhi, Gurgaon, Noida, Mumbai, Bengaluru, Chennai, and Pune. This company is licensed to provide broadband, internet in India. In 2012, Spectra net launched Fiber to the home services in Noida, Mumbai, Delhi, Pune, Chennai, and Bangalore. In 2017 Spectra net was rebranded as spectra. Rebranding aimed to build more brand awareness and showcase the greater motive behind the company’s mission- “to fix the Indian broadband market.”

This company was established in 1994, was India’s first mobile network operator. It provides services and products in the wider area of consumer telecom products and enterprise communications products. The motto of the company is “Believe in the Best.” The company has, over the years, developed distinct competencies in leading-edge technologies and diverse application domains drawn from the successful implementation of complex projects in highly competitive global markets.

Published in A to Z, Electronics, Others and Tech