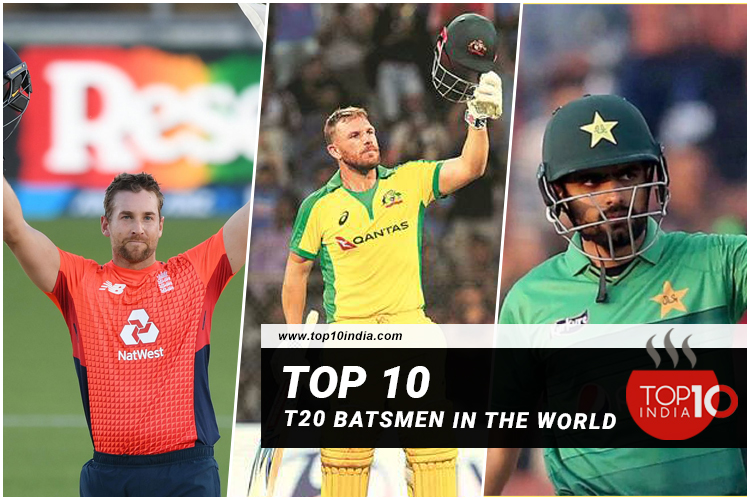 Top 10 T20 Batsmen in the World | Best Batsman of All Time: The T20 format is an emerging format of Cricket’s gentlemen’s game. The game has been being in continuous transformation. Domestic level t20 tournaments like Big Bash, IPL have added a boost to the game format at the international level. This year t20 world cup is scheduled. The t20 format is a game of hard hitters who can score big in less over format. At this point, we are providing you the list of the top 10 t20 batsmen in the world at the international level.

Dawid Malan is a left-handed English batsman. It debuted in t20 format in the year 2017, was knocked off 78 runs in 44 balls, and bagged the “Man of Match” award against South Africa. He has scored 1003 runs in 24 innings with an average of 50.15 and a strike rate of 144.31. His highest score is 103, not out. However, his international career has faced several ups and downs.

Aaron Finch is an Australian right-handed opening batsman. He is well known for his hard-hitting ability to wrap up the matches. Finch is a captain of the Australian Cricket Team. One of the remarkable performances of the Australian captain, which is still remembered, is when he smashed 156 runs on 63 balls against England in 2013. Aaron Finch has scored 2346 runs in 71 innings with an average of 38.46. He has 14 half-centuries to his name in the shortest format of the game. He also performs well with the ball and is very well known for his quick fielding abilities.  Finch has been associated with Royal Challengers Bangalore and Kings XI Punjab. He rules millions of hearts with his awesome performances.

Babar Azam is an emerging Pakistani player. He is a right-handed batsman and a dependable player in the Pakistani squad. As per ICC rankings, he is at number 3 in the top 10 t20 batsman. He is a cousin to another Pakistani player Kamran Akmal. He is a valuable addition to the Pakistani team as he provided strength and stability through his batting skills. He has a stunning average of 47.32 in t20 format in 52 innings. He is a wonderful player to watch.

Devon Philip Conway is a New Zealand Wicketkeeper left-handed batsman. He was born in Johannesburg. He started his international career last year, 2020.  So far, he has played 14 t20 matches and scored 473 runs in 11 innings with a thrilling average of 59.12. Being at number 4 in ICC rankings of top 10 t20 batters is a remarkable achievement for the newbie in a short span of time. His performances are promising, and we expect good performances from him in the coming years.

Virat Kohli, the skipper of the Indian Cricket team, is at number 5 on our list based on ICC ranking. Kohli has been a player likes great legend Sachin Tendulkar. He is a right-handed batsman and plays at the top order. He has played 84  innings and scored 3159 runs with an average of 59.07. He is well known for his target chasing ability. He performs well in every game format and rules the cricket ground by scoring big scores against every team. He plays for Royal Challengers Bangalore.

Rassie van der Dussen is a South African right-handed batsman. He plays either as an opening batsman or in the middle order. He started his international career in 2018. He has played in different countries before his entry to an international level, making him a dynamic and adaptable batsman. He has played 19 innings so far and scored 628 runs with a good average of 41.87.

KL Rahul is an Indian cricketer. He is a right-handed batsman. He also does wicketkeeping. He entered the international arena in 2014. His good performance in IPL 2016 has landed him on the Indian cricket team to tour Zimbabwe. He has scored a century in his debut match in ODI as well in his t20 debut match. He has scored 1557 runs in 45 t20 innings with an average of 39.92 and a strike rate of 142.19. His highest score on t20 is 110, not out. KL Rahul is highly inspired by the cricket legend Rahul Dravid. KL Rahul is similar to Rahul Dravid when he calmly performs under stressful situations and leads the team to win the match.

Glen Maxwell, a firing Australian batsman who frightens every bowler in the game, is at number 8 in our list and current ICC rankings of top 10 t20 batsman, 2021. His aggressive batting style is trendy among cricket fans. His eyes continuously search for the space on the ground to send the ball out of the boundary.  He is a right-handed batsman who also performs well with the ball. His fielding skills are marvelous, which makes him a perfect all-rounder for the team. He has an average of 31.78, scoring 1780 runs in 65 innings. His highest score is 145, not out. It is wonderful to watch him play.

Martin Guptill is a right-hand Kiwi batsman who debuted in international cricket in 2009. He is an opening batsman of the New Zealand team. He is a hard hitter, and it becomes unstoppable for another team when he picks his pace. He easily handles pacers or spinners. As the numbers are concerned, he has scored 2939 in 98 innings in the international t20 game. He is a matchwinner player and the strong pillar of the Kiwis.

Another Pakistani batsman is Mohammad Rizwan, who sealed the last spot in our top 10 t20 batsmen list. He is a righthanded wicketkeeping batsman. He has played 28 t20 innings so far and has scored 843 runs with an average of 43.87. He an emerging player and has a bright future to contribute to the Pakistani Cricket Team through his skills and talent.

The above list updates you about who are the top 10 t20 batsmen as per ICC ranking. It can be seen that the list features players from India, Australia, New Zealand, South Africa, and Pakistan. Many other wonderful players couldn’t make it to the list this time. But we are sure that soon with their performances, we would see new names of the emerging players in the list.