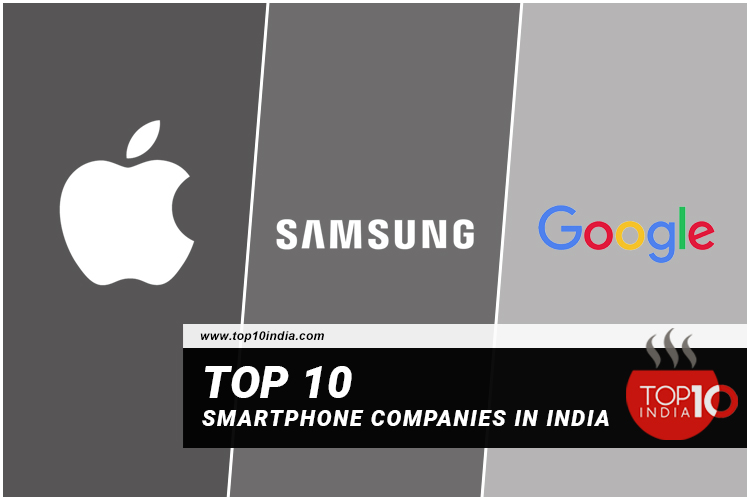 Top 10 Smartphone Companies In India: Apple is the number 1 smartphone company in India that offers classy features with excellent camera quality in all its mobile phones making it the best mobile brand in India too. Mobile phone is the basic necessity of today’s time be it kids, adults or old age. Everyone is connected to family and friends using a smartphone. There are many smartphones companies nationwide that you must know if you are in an ardent desire of a smartphone. Millions of Indians have already been using smartphones.

Around the world, mobile phone companies have made their place and in our country too every individual is aware of the Indian mobile market. In the year 2017, about 468 million Indians used smartphones and by the year 2022, it is expected that this data will rise to 859 million.

This falls to be the reason that people have a wide range of choice when they look for a smartphone. It becomes usually difficult to buy a smartphone as there are several companies that are trying hard and bringing classy models that are equipped with the latest technology in the market. Here is our list of the top 10 smartphone companies in India.

Apple is one of the few royale brands in our list that doesn’t need any introduction. It is one of the most profit earning smartphone company that is famous and renowned in the world. Apple also produces laptops, computers, handheld tablets, and iPhones that are available in a couple of models that lure customers but not everyone can afford them.

The range of the smartphones of apple company falls between Rs. 1 Lakh and Rs. 1.5 Lakh. The most popular models of the Apple iPhone in India are iPhone 7, The iPhone XS, iPhone 11, iPhone 7 Plus, and the iPhone 6s.

Samsung is a South Korean company and has always been one of the main competitors that stand against Apple in India. Samsung launches several smartphones as the Apple company does each year be it the medium-end, premium, and low-end devices.

The Samsung Galaxy S10 Plus offers a couple of superior features to buyers who are looking for premium specifications and costs between Rs. 1.1 Lakh and Rs. 1.2 Lakh. Some of the popular Samsung models are Galaxy A50s, The Galaxy S9, Galaxy M30, Galaxy M30s, and Galaxy S9 Plus.

Samsung is one of the best smartphone companies in India and the Galaxy S10 Plus is the latest version and the best features of this model are:

The smartphones of Google have become popular nowadays and one of them named Pixel is in high demand across India. Android OS in the running stock, are extremely fast, featuring cutting-edge tech upgrades.

Today, Google Pixel 4 XL from the Alphabet Inc. owned company, is bought between Rs. 1 Lakh and Rs. 1.1 Lakh. The most popular models of the Google phones are Pixel 3, Pixel 2, The Pixel 3a, Pixel 3a XL, and Pixel 3 XL.

Huawei is a Shenzhen-based company in China that provides very strong competition to all other smartphone companies in India. Huawei is not allowed to sell its smartphone in the United States, still, its global sales numbers remain good.

The price range of the Huawei P30 model that is one of the most feature-rich phone is around Rs. 80,000 and Rs. 82,000. The most popular models of Huawei are Huawei P9, The Huawei Y9 Prime, Huawei Y9, Huawei Honor 3X, and Huawei P30 Pro and these models make Huawei one of the top 10 rich mobile companies in India.

The best features of Huwaei top-end P30 Pro are

OnePlus is among the top 10 smartphones companies in India that operate out of Shenzhen in China. Indians are thankful to this mobile company for offering its services in India in recent years. As it got a great response from the consumers, OnePlus has expanded its work in the television sector too.

Xiaomi is one of the best smartphones selling companies in India. Xiaomi too is a Chinese company and entered India when the consumers lacked good options in mobile phone for the low quality and mid-range handsets. It has managed to become one of the top smartphone sellers in India.

The features of The Redmi K20 are

If anyone wishes to buy a dual-screen smartphone, LG is one of the only smartphone brands in the market, that is trusted and has created goodwill amongst the consumers. The model LG G8X ThinQ, which was launched in December 2019, being a foldable device with dual display costs around Rs. 50,000. The most popular models of the LG smartphones are LG W10, LG W30 Pro, LG G8s ThinQ, LG G8X, and LG W30.

The features of LG G8X ThinQ are

Oppo is one of the Chinese mobile manufacturers that started its operations in 2004, as a part of BBK Electronics. At present, it has captured major markets of India. The flagship of Oppo in 2019 was the Oppo Reno 10x Zoom which ranged between Rs. 50,000 and Rs. 60,000. The most popular models of Oppo are Oppo A5, Oppo A7, Oppo A3s, the Oppo F11, and F11 Pro.

The best features of The Reno 10X Zoom are

Vivo is one of the other BBK Electronics-owned companies, and it is one of the top mobile brands in India. The Vivo company is immensely popular among the consumers of India. The average range of Vivo’s handsets is affordable and the price lies between Rs. 10,000 and Rs. 40,000. The most popular used models of Vivo in the market are Vivo U20, Vivo V17 Pro, V15 Pro, Vivo Y91i, and Vivo U10.

The best features of V17 Pro are

Nokia is one of the oldest smartphone selling company in India and is one of the Top 10 Smartphone Companies In India. Nokia is a Finnish telecom company that was once known to be the best cellular phone manufacturer in the world. In the year 2000, it was at its peak and Nokia’s popularity in the world was such that its revenue was around 4% of Finland’s GDP.

The best features of Nokia 9 PureView are

Apple is the No.1 mobile company in India.

Samsung is one of the best mobile brands in India.

Oppo is the best mobile company.

Published in A to Z, Electronics, Gadgets and Tech