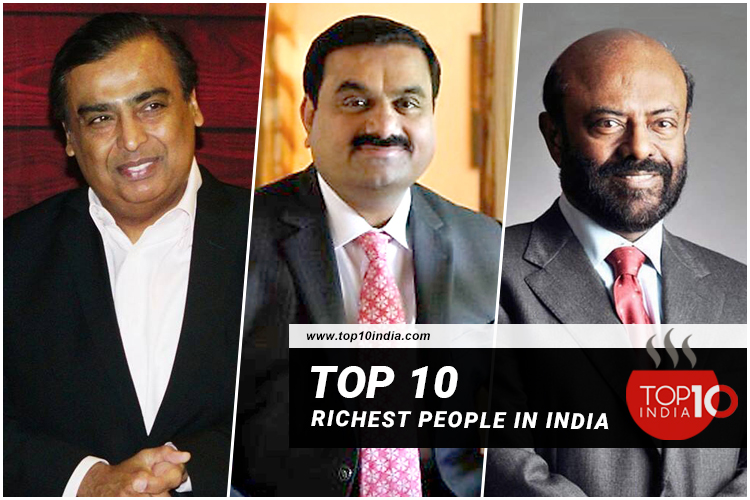 Top 10 Richest People in India | Indian Richest Man List: Wealth does not remain stable, especially during the dynamic industry scenario. India has significantly produced several billionaires who occupy an important number of positions on the list of wealthiest persons in the world today. Talking about the latest list of the top 10 richest persons in India as per their real-time earnings and net worth. Following is the list, have a look.

Owner of Reliance Industries, Mukesh Ambani, is the wealthiest person in India, and not only this, he occupies the fifth slot in the world’s richest persons’ list. He has a net worth of $73.6 billion. The source of his earnings majorly comprises the petrochemicals and oil and gas businesses built by his father, Dhirubhai Ambani. Dhirubhai Ambani was a business icon in his own right, but Mukesh focuses more on consumer-faced businesses, including the telecom and retail sectors. Reliance Jio has become one of the largest telecom networks in India currently. The earning of which has raised over $20 billion in recent months, and the next business segment for fundraising will be for retail.

Gautam Adani booked the 2nd slot with a net worth of $56.2 billion. The second richest person in India is on position 22 on the world’s richest persons. Mundra Port, the largest in India, his wealth-generating portfolios are not the only source of Adani’s earning. It also includes a range of commodities, power generation, including renewable energy (like solar farms), and transmission, to name a few.

With an estimated net worth of $24.7, Shiv Nadar ranks as the third richest person in India. He is the founder of HCL Technologies. The current marketing value of the company is (₹) 274826 crore. HCL is one of the largest software services exporters in the world today. HCL is present in over 45 countries on the globe. This makes Shiv Nadar hold the 68th slot in the list of the world’s richest persons.

At the fourth position on the top 10 richest people in India, we have Lakshmi Mittal. The CEO and Chairperson of ArcelorMittal. Lakshmi Mittal has a net worth of $17.8 billion. He is at 104 positions on the world’s richest person list, all thanks to the wealth he has got. Lakshmi Mittal is well known for turning sick steel-producing companies into profitable ventures all across the world. He had recently overtaken the bankrupt Essar Steel in India, which the Ruia family-owned.

Next on the list, we have the owner and founder of Kotak Mahindra Bank. Uday Kotak is in the fifth position on the list of India’s richest people. He occupies 136th place on the world’s richest persons’ list. Currently having an estimated net worth of $14.6 billion. The source of his earning is clearly through the bank he founded, owned, and operated.

At position six, Radhakishan Damani made his way to the top 10 richest persons in India. Currently having an estimated net worth of $14.5 billion. Radhakishan Damani is at the 141st position in the global rich list. Radhakishan Damani is an expert Mumbai stock market investor. He is the one who founded the supermarket chain DMart which went public in 2017 and eventually became the world’s most-valued retail chain for its unique model that makes the holding company Avenue Supermarts more profitable than many of its competitors.

Standing strong at the 169th position globally and being the richest woman in India, Savitri Jindal occupies the seventh position on the richest people in India. The 70-year-old chair of a multibillion-dollar amalgamation, whose net worth is $12.8 billion. The steel company founded by her husband O.P Jindal is the Savitri Jindal & Family source.

With an estimated net worth of $12.7 billion, Kumar Birla brings him to the eighth position of the richest person in India. Birla is at the 173rd position on the world’s richest persons’ list. Kumar Birla is the head of Aditya Birla Group which he inherits for the fourth generation. His group is concerned with producing aluminum and cement alongside providing retail, telecom, and financial services.

Standing at 179th position on the world list of wealthiest people and having ranked as the 9th wealthiest person in India, he is none other than Cyrus Poonawalla. He has a net worth of $12.5 billion. In the year 1996, he founded the Serum Institute of India, and today it is the largest producer of vaccines for measles, influenza, and polio. Presently, the company is working on co-developing two vaccines for COVID-19 and is significantly leading over other similar researches underway. This is a great initiative by the company to save our country and world from this pandemic situation.

At position 10 on the list of the wealthiest person in India is Dilip Shanghvi, whose current net worth is $11.2 billion. Dilip Shanghvi is the founder of Sun Pharma. He has turned his firm into the largest player in the manufacturing of specialty generic drugs. He is also investing in energy and oil ventures. On the world’s richest persons’ list, he ranks in the 200th position.

So we have reached the last segment of the discussion. The top 10 richest people in India are being named and discussed. However, this list can’t be stable forever. But for now, the above-discussed names are the wealthiest people in India. It’s strange that the list includes the names of people doing different businesses and belong to altogether different industries; it states that even in developing countries, the wealth is accomplished by the hard work of the whole country. The above-discussed people may belong to different industries but have made it till here in India’s list of richest people.

Published in A to Z, Business, Economy, General knowledge and Personality