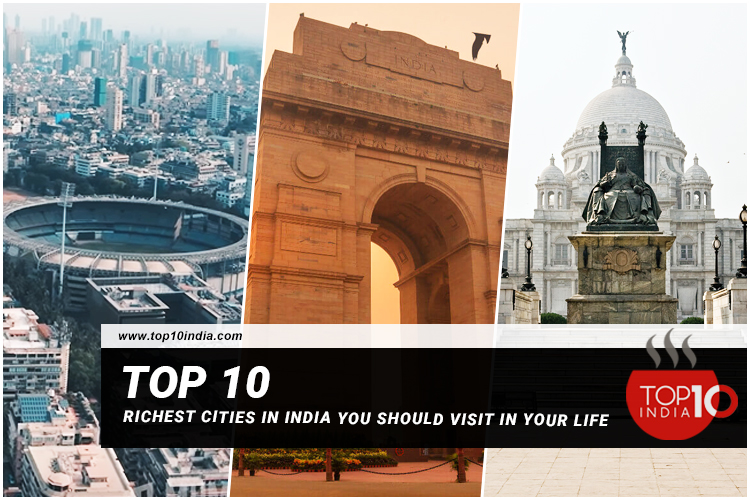 Top 10 Richest Cities in India: India is the second most popular county globally and the seventh-largest country by area in the world. India is becoming one of the fastest-growing countries. With a national growth rate of 7 percent, Indian cities are the main contributors of the capital to the nation’s economy. Here is the list of the top 10 richest cities in India.

Mumbai is on the top list of the richest cities in India. It is the capital city of Maharashtra. It is also called the financial capital of the country. Mumbai is also known as the City of Dreams. It is renowned for the Propelling and most glamorous industry.  It is one of the largest cities in the country. The city is known for its colossal bungalows, star-studded Bollywood industry, contemporary culture, and dazzling nightlife. The Bollywood celebrities and the richest business tycoons are the residents of this city. The GDP of this city is USD 310 trillion. Major industries in the city are Textile, Bollywood, Automobile Manufacturing, Metals, and Food Processing electronics. The best places to visit this city are Gateway of India, Kanheri Caves, Haji Ali Dargah, and many more. It is a hub for exclusive financial transactions and circulations.

Delhi is the capital of India, one of the wealthiest cities in the world. Delhi is the most popular city in the country. Its population is 2 crores. It is the political center; Delhi is home to all the political personalities and officeholders, including the President, the Prime Minister, and distinguished ministries. The estimated GDP of Delhi is $293.6 billion. Delhi is one of the cities which has rapidly grown in the previous years without losing its traditional touch. Major industries in Delhi are Banking, Hotels and Hospitality, Tourism, and telecommunications. New Delhi is jointly administered by the Local government and Federal government of India. Delhi was the city that hosted Asian Games in 1951 and Common Wealth Games in 2010. Famous places to visit in Delhi are India Gate, Akshardham Temple, Jama Masjid, Qutub Minar, and Humayun’s Tomb.

It is one of the largest metropolises; Kolkata is the capital city of West Bengal.  It is having a GDP of $150.1 billion. It is also known as the Talent Hub of India. Its economy runs on the tourism industry. Kolkata’s various tourist places are Kali Ghat, Indian Museum, Marble Palace, Victoria Memorial, and Howrah Bridge. Being a port city, it serves as a sight of extreme commercial exchanges that add to its economic growth. Major industries in Kolkata are Mining, Heavy Engineering, Cement, Agriculture, Textile, Jute, and Food Processing. “City of Joy” is also known as the cultural capital of the country. Kolkata is also rich in terms of architecture, culture, and art.

Bengaluru is the capital of the state of Karnataka. It is also known as the “Silicon Valley of India.” It is the ultimate hub for the tech-geeks. This city is known for its distinct culture, Victorian architecture, upmarket restaurants, and opulent shopping malls. It is also known for being an IT(Information Technology) hub. The GDP of Bengaluru is $110 billion approximately. Major industries in Bengaluru are IT Sector, Production, Automobile Manufacturing, Steel, and Production Mining. The city is also famous for its various theme parks and its youthful night. A famous place to visit in Bengaluru is Lalbagh Botanical Garden, Bangalore Palace, Cubbon Park, Nandi Temple, Tipu Sultan’s Summer Palace, and Golden Chariot.

It is the capital and largest state of Telangana. It has a rich historical account; Hyderabad emerges as a center of history and architecture. Hyderabad is the 4th most popular city in India, with a population of 6.9 million. It is also known as the “City of Pearls and Biryani.” The city offers a good education sector and infrastructure, which encourages students to come to the city to pursue their higher education. Hyderabad has a tropical wet and dry climate. GDP of Hyderabad is approx. $75.2 billion. It is among the richest cities in India. It has 3 National Parks- Mrugavani National Park, Mahavir Harina Vanasthali National Park, and Manjira, Wildlife. Major industries in Hyderabad are Manufacturing, Tourism, and Education sectors. The famous places to visit are Charminar, Birla Temple, Ramoji Film City, Golconda Fort, and Hussain Sagar. Telugu, Urdu, and Marathi are the common languages being spoken in the city.

Chennai is the capital city of the Indian state of Tamil Nadu; its population is about 7 million. It was established in 1661 by the British East India Company. With the major contribution in India’s IT sector, Chennai is among the richest places in India, having a GDP of $78.6 billion approximately. Chennai is also known as the Automobile Capital of India. Marina Beach in Chennai is among the longest beaches in the world. Major industries offered by the city are Software Service, Automobile, Medical Sector, Hardware Manufacturing, and Tourism. Chennai is ranked as Beta Level City in the global cities index and was ranked the best city in India by India Today in 2014. Tourist places offered by the city are Fort St. George, Guindy National Park, Marina Beach, and Kapaleeshwara Temple. In October 2017, Chennai was added to the UNESCO list for its Rich Musical Tradition.

Ahmedabad is the capital state of Gujarat. This city is known for its diamond and gems markets. This city is famous for Mahatma Gandhi’s Ashram. Ahmedabad is one of the richest cities in India, having a GDP of $68 billion. Its transport and textile markets increase the economy of this city. Major industries offered by this city are petrochemicals, pharmaceuticals, and textiles. Famous tourist places to visit in Ahmedabad are Sabarmati Ashram, Kankaria Lake, Adalaj Stepwell, Bhadra Fort, Sidi Bashir Mosque. Ahmedabad is famous for its food, especially Rajwadi Gujrati Thali.  It is among the most popular cities in India.

Pune is the second largest city of Maharashtra, with an estimated population of 7.4 million. It has been awarded as “The Most Livable City of India” several times. Pune is considered the second major “IT Hub of India” and the top automobile hub of India. This city is known for its premier educational institutes, automobile industry, and IT hub. This city is also rich in terms of history, landscape, and spiritualism. The GDP of this city is 48 billion approximately. Famous tourist places are Shaniwar Wada, Aga Ali Palace, Singahad Fort, Parvati Hills, Rajiv Gandhi Zoological Park. It is considered the most beautiful city to travel to in India.

Surat is situated in the western Indian state of Gujarat. It is located at the mouth of the Tapti River. This city has well-established diamond and textile industries. Surat is listed as 2nd cleanest city in India, according to the Swatch Survekshan. It is the best shopping center for apparel and accessories. Surat is one city that is considered in the list of richest cities in India, with a GDP of $59.8 billion. This city is famous for its pristine beaches, monuments, and religious attractions. Famous tourist place to visit is Amaazia Water Park, Ambika Niketan Temple, Sardar Patel Museum and Dumas Beach. This city attracts a large number of merchants from all around the world. This city is also listed of the most populous cities in India. The literacy rate of Surat is 86.65% approximately. The major industries offered by the city are Chemicals, Diamond Cutting, Manufacturing of Machines and Equipment, Zari Making, and textiles.

It is in the port city of the Bay of Bengal in the state of Andhra Pradesh. This city is basically known for its beaches, architecture, temples. The city is the most populated and largest city lot of Andhra Pradesh. It is among the smarter cities of Andhra Pradesh. Its GDP is 44 billion approximately. Famous places to visit in Visakhapatnam are  Kailasagiri, Araku Valley, Borra caves, Submarine Museum, and Rushikonda Beach. The best time to Visakhapatnam is October to March. Visakhapatnam is among one the cities that are considered in the list of richest cities in India. Major industries provided by the city are Fishing, Petrochemicals, Fertilizers, polymers, Industries, Tourism.

The top 10 Richest cities of India list is being prepared by consolidating the GDP, popularity, and the famous places to travel by the cities. This will help you gain knowledge about the richest cities in India.

Published in A to Z, Business, Destination, Economy and General knowledge