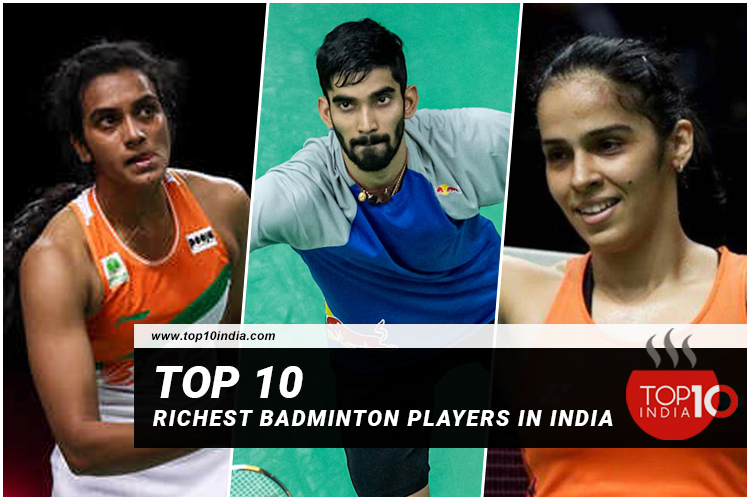 Badminton had indeed helped a lot of players reach the peak. The enthusiasm this game possesses is truly admirable Sport is characterized as a set of activities centered on physical athleticism or dexterity, with major competitions such as the Olympic Games admitting only sports that meet this criterion. For the fans of Badminton in India, we have enlisted below the Top 10 Richest Badminton Players In India.

Richest badminton player in India Pusarla Venkata Sindhu is Indian badminton professional. Pusarla has accomplished herself in several events, including the BWF circuit and the Olympics, most lately she has won gold at the 2019 World Badminton Championships.

The second-highest-paid badminton player in India, Srikanth Kidambi, is a badminton player who trains at Hyderabad’s Gopichand Badminton Academy. In April 2018, he was ranked number one in the world by the BWF. Kidambi earned India’s fourth highest civilian honor, the Padma Shri, in the year 2018 and the Arjuna award in 2015.

Saina Nehwal is a skilled badminton player from India. She reached world number two in 2009,  but it took her until 2015 to reach number one, making her the first female and second Indian player (after Prakash Padukone). Sania Nehwal has fought in three Olympics for India, earning a bronze medal in her second.

One of the highest-paid badminton players in India, Parupalli Kashyap, attends Gopichand Badminton Academy for his training. In 2012, the Government of India presented him with the Arjuna Award.

He made history by becoming the first Indian male player to reach the quarter-finals of the men’s singles event at the 2012 London Olympics.

Prannoy H.S. broke into the international scene when he won Silver at the 2010 Youth Olympics in Singapore, his first international medal. Later that year, in Guadalajara, Mexico, he captured the bronze medal in Boys’ singles at the World Junior Badminton Championships.

Jwala Gutta, whose net worth is INR 7 Crore, has won various medals for India in badminton, including a bronze medal at the 2011 BWF World Championships in London and gold and silver medals for women’s doubles event at the 2010 and 2014 Commonwealth Games, respectively.

Bhamidipati  Praneeth is a badminton player from India. In 2019, he became the first Indian male shuttler to win a bronze medal at the BWF World Championships since Prakash Padukone in 1983. Sai Praneeth won the Arjun Award in 2019.

Some people may be surprised to learn that badminton is one of the world’s top ten most popular sports. Badminton is getting popular today. Badminton is a wonderful game that everyone enjoys playing, from children to the elderly.

Badminton has produced some of the best players in the world over a long period. In their respective countries, they are well-known public figures. They still have a strong financial base.