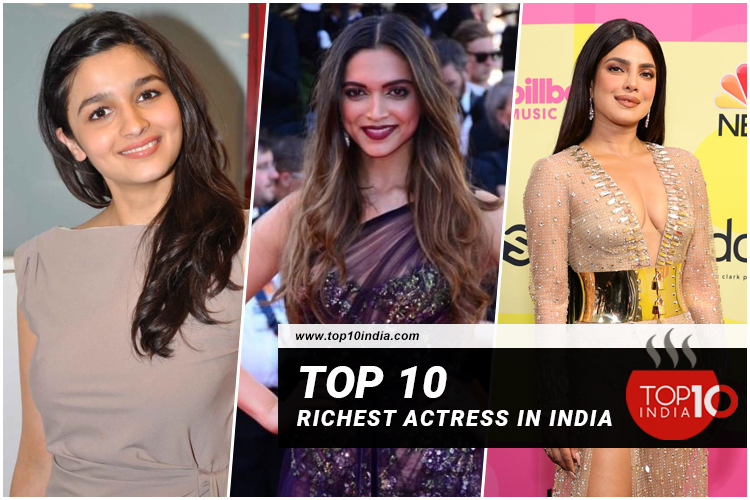 Top 10 Richest Actress In India: Alia Bhatt is the number 1 richest Actress in India who is also one of the youngest Bollywood actresses and is known for costly utility bags. The Indian film business has produced a long list of wealthy actors and actresses. Many rich actresses have come our way, and we have used their previous years’ financial revenues and the renowned quotient obtained from social media as criteria for awarding them for being rich.

Bollywood is well-known as one of the world’s largest film businesses, and it is home to many talented men and women from all around the country. Several names come to mind while thinking of the richest actress in India in 2021, but who is the richest? The following is a list of the top ten richest actresses in India who have built a name for themselves in the Indian film industry and have a sizable social media following.

Alia Bhatt’s highest-grossing film was Gully Boy, which was also nominated for an Oscar in India. Alia Bhatt’s large social media presence has provided her with an advantage over the competition more than her riches. She has earned about 59.21 crores from her film career so far. Alia Bhatt’s style has always been really relatable as casual, relaxed, and cool.

We’re not just talking about her tracksuits, unstructured shirts, and no-fuss pantsuits. Bhatt’s bag choices reflect her sartorial sensibilities, and her mantra might easily be, “It-bags, but keep them utilitarian.” So, even though her bag closet is brimming with designer purchases, she refuses to sacrifice utility for the sake of logos.

Deepika Padukone, one of the glamorous divas of Bollywood who had once been the most expensive Bollywood actress in India who was paid a total of 12 crores for the film Padmavat. She earned 48 crores in 2019, compared to 112.8 crores the year before. Her current earnings are largely based on her brand endorsements.

Priyanka Chopra Jonas was in the news for demanding 1.92 crores for a sponsored Instagram post on her page. For the 2008 film Fashion, she won the National Film Award for Best Actress. In 2019, she earned a total of 23.4 crores. Her earnings for 2020 have yet to be announced. Micro purses, not large handbags, are the greatest accessory she carries with her. Priyanka Chopra has a great array of little fancy bags. Her Instagram photos show that she can’t live without her mini bags.

Anushka Sharma reached the pinnacle of her fame after starring in the critically acclaimed film PK. When her only film, Zero, failed to fare well at the box office, she got upset. She earned 45.83 crores the previous year, and her earnings in 2019 are expected to be 28.67 crores. The earnings of Anushka Sharma for 2020 are yet to be announced.

Rajneeti, Katrina Kaif’s film, received a lot of positive feedback from critics. Bharat and Zero were two additional great films that contributed to her recent popularity and riches. She starred alongside Shah Rukh Khan in the latter film. Katrina Kaif 2019 earnings were 23.63 crores, while her 2020 earnings are yet to be announced.

Katrina Kaif, who is known for living a lavish lifestyle, is also a fan of high-end automobiles. The actress is the proud owner of a 72.21 lakh Audi Q7. She has previously stated that she is a devotee of German technology and hence owns a few automobiles.

Shraddha Kapoor’s star has risen in the film business recently due to her roles in the hit films Saaho and Chhichhore. Her breakthrough performance as a college girl in Teen Patti in 2010 gave her a royal entrance into the film industry. She earned 8.3 crores in 2019 and has yet to announce her earnings for 2020. Baggit, India’s most popular bag, and accessory brand, has enlisted Bollywood actress Shraddha Kapoor as a brand ambassador.

The Sri Lankan actress Jacqueline Fernandez is a gorgeous actress who could carve out a niche for herself in comedic parts in films like Housefull 2 and Judwaa 2. Films like Race2 and Kick also helped her increase her earnings and social media recognition. Her 2019 earnings were 9.5 crores, with no information on her 2020 earnings currently available. She endorses several well-known products. Jacqueline is one of Bollywood’s most glamorous actresses who never makes a fashion faux pas.

Famous Bollywood Actress Kriti Sanon’s films have received mixed reviews. She has the potential to produce comic hits such as Housefull 4 and Raabta. Kalank, Luka Chuppi, Arjun Patiala, and Housefull 4 are among her most recent films. Her 2019 profits were $8.09 crores, while her 2020 earnings have yet to be announced.  In 2014, Kriti Sanon entered the world of glitz and glamour.

In Heropanti, she made her acting debut alongside Tiger Shroff. The movie did well at the box office, and the actress was nominated for several prizes that year.

Following her performance in Dhamaal, a film that grossed over 200 crores worldwide, Madhuri Dixit became a hot topic in the media. Her reputation has recently soared thanks to the Netflix release of the Marathi film 15 August. She earned 10.83 crores in 2019 after winning six Filmfare awards and the Padma Shri award in 2008. Her 2020 earnings have yet to be announced.

Mission Mangal, Sonakshi Sinha’s blockbuster film, is expected to gross over 200 crores. Kalank, Laal Kaptaan, and Khandani Shafakhana are among her other important films released this year. Her 2019 earnings are 6.14 crores, while her 2020 earnings have yet to be announced. Sonakshi Sinha is one of the most beautiful Indian actresses with big eyes.

1. Who is the richest actress in India?

Deepika Padukone is the richest actress in India.

2. Who is the number 1 actress in India?

Alia Bhatt is the number 1 actress in India.

3. Who is the poorest actress in India?

All the actresses are rich, and no actress is poor.

4. Who is richer, Priyanka Chopra or Deepika Padukone?