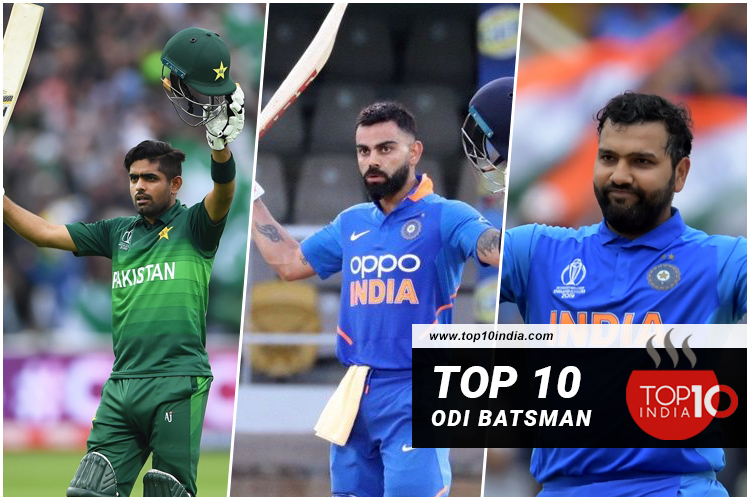 Top 10 ODI Batsman | ODI Batsman Ranking:- ODI is the One Day International form of limited-overs cricket played between two teams with international status. Each team faces a fixed number of overs, currently 50, with the game lasting up to 8hrs. The cricket world cup, generally held every four hours, is played in this format. One-day international matches are also called Limited overs internationally.

Babar Azam was born on 15 October 1994 in Lahore. He is a Pakistani Cricketer who captains Pakistan in all formats. A right-handed top-order batsman, Azam is regarded as one of the best contemporary batsmen in the world. In May 2015, Babar was included in the Pakistan ODI squad for the home series against Zimbabwe. He scored impressive 50 runs off 60 balls. He made hat-tricks of ODI hundreds against West Indies. He was the second-fastest player to make 2000 ODI runs.

Virat Kohli was born on Nov 05, 1988, in Delhi. Virat Kholi is currently leading the men’s ODI ranking with the highest point in the table. Virat Kholi made his ODI debut in 2008 and now the skipper of the Indian men’s international cricket team. Virat Kohli breaks the records of all-time legend Sachin Tendulkar by scoring 11000 fastest runs. Virat Kohli also wins three-time ICC player of the year awards in 2012, 2017, 2018. Kohli has the second-highest number of centuries and the highest number of centuries in run chases globally.

Rohit Sharma was born on 30 April 1987, in Nagpur, Uttarpradesh. He is an Indian right-hand Batsman who is most commonly known for his hard-hitting batting in the opening. Rohit Sharma started his ODI career in 2007 when he was only 20 years old. Rohit Sharma holds the highest individual score in an inning in ODI, which is  264 runs which he scored against Sri Lanka. Rohit Sharma also holds another unbreakable record-holding 3 double hundred centuries in an ODI cricket format.

Ross Taylor was born on 8 March 1984 in New Zealand. He is the leading run-scorer for New Zealand in Test and ODI Cricket. He made his then highest ODI score of 131 runs off 124 balls against Pakistan on 8 March 2011 at the ICC cricket world cup. Ross Taylor, Who made his one-day international debut on 1 March 2006, had played 218 ODI matches until the 2019 World Cup. Taylor became only the fourth batsman in the game’s history that scored an ODI century on a birthday.

Aaron James Finch(born 17 November 1986) is an Australian international cricketer who captains the Australian cricket team. He made his One Day International(ODI) debut against Srilanka. Finch was selected as a part of Australia’s 2015 Cricket world cup squad. A top-order batsman and the fastest to reach 10 ODI centuries. In March 2019, he became the 29th Australian player to play 100 matches. Finch also holds the records of joint-fastest half-century by an Australian in ODIs — 50 runs off 18 balls.

Jonny Bairstow was born on 26 September 1989. He is an English cricketer who plays internationally for England. Bairstow was a part of the England squad that won the 2019 Cricket world cup. He is the first England cricketer to score three consecutive one-day international hundreds. On 14 May 2019, Bairstow scored 128 off 193 balls to help England win over Pakistan in a One Day International. He ended the ODI world cup as the second-highest run-scorer for England and the highest run-scorer overall in the world cup.

Fakhar Zaman was born on 10 April 1990. He is a Pakistani cricketer who plays for Pakistan national cricket team and for Lahore Qalandars in Pakistan Super League. He became the first batsman for Pakistan to score a double century in a One Day International(ODI) match. Two days later, he became the fastest batsman to score 1000 runs in ODIs. In August 2018, he was one of the thirty-three players to be awarded a central contract for the 2018-19 season by Pakistan Cricket Board. On 4 April 2021 Fakhar scored 193 before being run out and he became the highest individual score while chasing in an ODI.

Faf Du Plessis was born on 13 July 1984. He is a South African International Cricketer and former captain of the South Africa National Cricket Team. Du Plessis made his ODI Debut on  18 January 2011 against India and made unbeaten 60 runs. Du Plessis made his maiden ODI hundred on 27 August 2014 against Australia after scoring 106 off 98 balls. He set the record for playing the most number of international cricket inning and also became the only batsman to play in over 100 international innings before the first ever duck.

David Andrew Warner was born on 27 October 1986 in Sydney, Australia. He is an Australian International Cricketer and a former captain of the Australian National Team. He became the fourth player to win the Allan Border Medal more than once and also win the award in consecutive years. On 28 September 2017, he played in his 100th ODI and became the first batsman for Australia and 8th batsman overall to score a century in his 100th ODI. He is the first Australian batsman to score 7 ODI centuries in a Calendar year.

Quinton de Kock was born on 17 December 1992. He is a South African International Cricketer. he became the fourth player to score three successive one-day centuries and the second player to score four ODI Centuries before his 21st birthday. He became the fastest player to complete 12 ODI Hundreds. He also became the highest run-getter ever in the three-match bilateral ODI series breaking the previous record of Martin Guptil.

Based on research and study, here is the list of Top 10 ODI Batsman. These batsmen are the all-time favorite in fans’ memories because they had made world records and impress fans with their wonderful performance. Some of the names of other legends like Kapil Dev, Ricky Ponting, Viv Richard, Sachin Tendulkar, and others are not mentioned in this list because this list is made according to the latest update 2021. But they are the legendary players and all-time favorite batsmen.