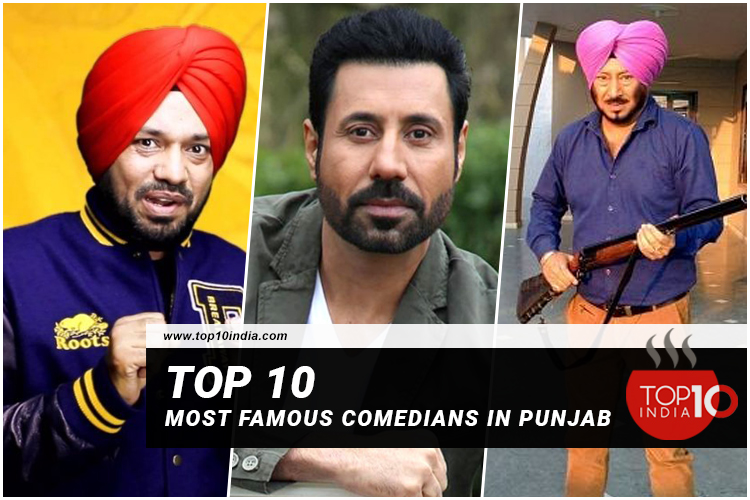 Top 10 Most Famous Comedians In Punjab

Top 10 Most Famous Comedians In Punjab: A comedian or comic is a person who seeks to entertain an audience by making them laugh. This might be through jokes or amusing situations, or acting foolish, or employing prop comedy. A comedian who addresses an audience directly is called a stand-up comedian.

Top 10 Most Famous Comedians In Punjab

The Punjabi film industry, also known as “Pollywood” has undergone a big positive change for the last few years. This milestone is because of the contribution of several Punjabi artists in this sector. Among the various categories of filmmaking in the Punjabi cinema, movies based on the comedy genre receive a favorable response from the audience. And the reason for the successful comedy is the dedicated work of Punjabi Comedians. Through their entertaining and funny facial expressions and hilarious dialogue delivery, they have established themselves in Pollywood.

Gurpreet Singh Waraich commonly known as Gurpreet Ghuggi is an Indian actor, comedian, and politician. He is known for his works in Punjabi and Hindi films. Ghuggi began his career by acting in theatre in the early 1990s, after which he had recurring roles in television series such as Ronak Mela and the soap opera Parchhaven. He gained international public recognition with comedic leading roles through his videos Ghuggi Junction (2003) and Ghuggi Shoo Mantar (2004), before beginning his film career by starring as Patwari Jhilmil Singh in Asa Nu Maan Wanna Da (2004). He starred in the film Carry On Jatta (2012) and was praised for his meaningful leading role in Ardaas (2015).

Binnu Dhillon began his career as a Bhangra performer and had an opportunity to perform at the Indian Festivals in Germany and the UK, he appeared in television and serials before he entered the acting field. He continued to act in plays during his time in university such as as a student and as part of the theatre and television department’s repertory too. He made his debut on television with the serial Paddu, written and directed by Gurbir Singh Grewal in 1998 and went on to work in popular television serials Sarhad, Lori, Gaoundi Dharti, Sirnaave, Man Jeetey Jag Jeet, Channo Chan Vargi, Professor Money Plant, Jugnu Hazir Hai, Jugnu Mast Mast, Padam Paria, Kankaal, Paste and Pagdandian.

Jaswinder Bhalla is an Indian actor and comedian who works in Punjabi cinema. He started his professional career as a comedian in 1988 with Chankata 88 and became an actor with the film Dulla Bhatti. He is best known for his comedy series Chankatta and comedy roles in various Punjabi films. He is famous for always using taglines in his movies, and bringing a comic touch to movies through them. He also performs in stage acts and has done tours of Canada and Australia for his stage show Naughty Baba in Town.

B.N. Sharma is an Indian actor. He began his career in a Punjabi soap, Jeb Katre on Jalandhar Doordarshan, and comedy serial Flop Show. He is known for his roles in such films as Mahaul Theek Hai, Jatt and Juliet, and Carry On Jatta. He began his acting career with a negative character in Jalandhar Doordarshan’s Punjabi soap Jeb Katre (Pocket Pickers) in 1985. His first movie was Visakhi (1987), which was a hit. He acted as a recurring and different character in the hit series Flop Show in 1989. He later collaborated with Jaspal Bhatti in other ventures like Ulta Pulta and Full Tension. He had a minor role in the anti-corruption comic film Mahaul Theek Hai (1999) followed by major roles in over 70 Punjabi films. His recent hits include Jatt and Juliet, the quasi-sequel Jatt and Juliet 2, and Carry on Jatta. Sharma won the Best Actor in a Comic Role award at the PTC Punjabi Film Awards.

Karamjit Anmol is an Indian actor, comedian, singer, and film producer active in the Punjabi entertainment industry. He has worked in many Punjabi movies including Laavaan Phere and Carries on Jatta 2. He has also acted in the comedy plays “OMG !! Oh My God” and “Naughty Baba In Town” which were staged in Canada, America, New Zealand, and Australia. He received the “PTC Best Comedian Of The Year” award in 2017 for Main Teri Tu Mera.

Rana Ranbir gained popularity with his role as “Shampy” in the movie Jatt & Juliet. His funny stature and dressing style in the film made him famous in the Punjabi cinema. He learned acting from theater cinema and worked in many plays during his struggling days. Rana has achieved new heights in today’s time.

Harby Sangha is an Indian actor, comedian, and singer. He started his professional career as a comedian in 2004 and became an actor with the film Asan Nu Maan Watna Da. He is primarily known for supporting roles in Punjabi cinema. Sangha was born in a village called Sangha Jagir in Nakodar, Jalandhar, Punjab, India. He completed his primary education in, Punjab, India, and later he completed his college education at DAV College, Nakodar, Punjab, India. Before becoming a comedian, he worked as a compounder. He was introduced by the renowned Punjabi actor Gurpreet Singh Waraich, commonly known as Gurpreet Ghuggi in the Punjabi TV and film industry. In 2001, he was first featured on the Gurpreet Ghuggi television show Ghuggi De Barati in the song “Khali Mudi Barat”.

No.8 Bhagwant Mann (Top 10 Most Famous Comedians In Punjab)

Bhagwant Singh Mann is an Indian politician. Since May 2014, he is the Member of Parliament, Lok Sabha for Sangrur constituency, Punjab. He has also been a professional comedian who performs skits in the Punjabi language. Bhagwant Mann is a famous Punjabi comedian in Pollywood. His renowned comedy shows are Bhagwant Mann Full Speed, Jugnu Kehnda Hai, and Jugnu Mast Mast. Among all Punjabi comedians, Mann is the one artist, who has been entertaining since a very early time. He used to perform in Punjabi comedy skits based on politics, and other social issues. Not only this, his performance in the Punjabi film industry has taken it to a significant level. His famous works are Bhagwant Mann Non-Stop, Police in Pollywood, Hero Hitler in Love, Ekam – Son of Soil.

No.9 Upasana Bharadwaj (Top 10 Most Famous Comedians In Punjab)

Upasana Bharadwaj is an Indian actress and stand-up comedian. Singh is known for her role as a deaf-mute in the 1997 film Judaai. Later on, she got famous for her negative portrayal in Son Pari as Cruella/Calipari a dark fairy, her comedic role as Gangaa in a patriotic sitcom on Doordarshan Phir Bhi Dil Hai Hindustani (TV Series), and Zee thriller show Tamanna House. Later on, She played small roles in Priyadarshan and David Dhawan films as a regular cast. She played the character of “Bua” (paternal aunt) in the TV show Comedy Nights with Kapil which got her widespread critical acclaim. She is popular for her onscreen style and Punjabi and funny English dialogue delivery. She has done numerous Bollywood films as well as regional cinema such as Punjabi, Bhojpuri, Rajasthani, and Gujarati.

No. 10 Jaspal Bhatti (Top 10 Most Famous Comedians In Punjab)

Jaspal Singh Bhatti was an Indian television personality known for his satirical take on the problems of the common man. He is most well known for his television series Flop Show, Full Tension, and mini capsules Ulta Pulta which ran on Doordarshan, India’s national television network, in the late 1980s and early 1990s. He was commonly known as “King of Comedy” and also “King of Satire”. He carried out various anti-corruption crusades in Chandigarh. His frontal attack on issues like red-tapism, nepotism, and corruption was both comic and awakening for the masses. In 2013, he was honored with the Padma Bhushan, India’s third-highest civilian award.

1.  Who is the most famous Punjabi comedian in Pollywood?

Binnu Dhillon is the most famous Punjabi comedian in Pollywood.

2. Who is the no.1 Punjabi comedian in Pollywood?

Gurpreet Singh Waraich is the no.1 Punjabi comedian in Pollywood.

3. Who is the richest Punjabi comedian?

4. Which Punjabi comedian is also a member of Parliament?

Bhagwant Mann Punjabi comedian is also a member of Parliament.