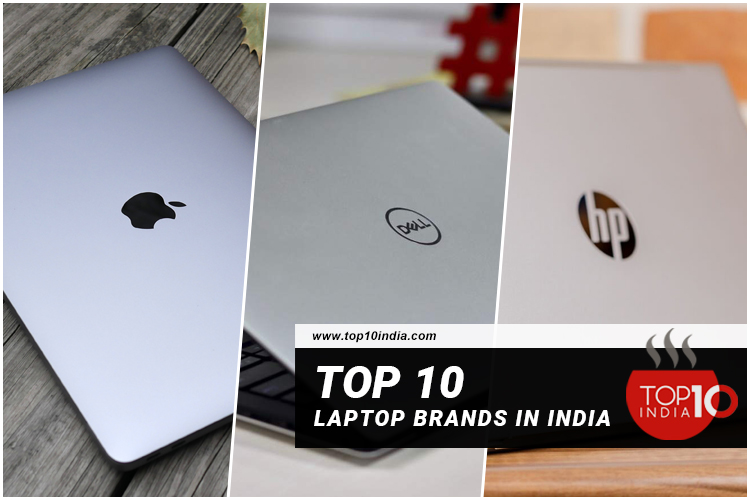 Top 10 Laptop Brands in India: Laptops and Computer Systems are some of the most important electronic gadgets used in our day-to-day lives. We can carry Laptops, Tablets, and Notebooks with us. Laptops can be used for casual work, official work, playing games, making reports, editing videos, music, and many more purposes. Every laptop is suitable for a particular task. Below is the list of the top 10 laptop brands in India 2021.

Several laptop brands are known to make some of the best gadgets and devices in all the different budget categories in India. They manufacture gaming laptops that are power-packed with all the best features and budget laptops suitable for office workers and students. In this article, you will most probably get a fair idea to select which brand will best suit your needs and which laptop will be the most suitable for purchase that you can use regularly.

Apple Inc. is an American multinational technology company that deals in consumer electronics, computer software, and online services. Apple was founded by Steve Jobs, Steve Wozniak, and Ronald Wayne. Apple is also considered the most valuable brand & the world’s largest technology company by revenue, with $ 274.5 billion in 2020. The Company has crafted its uniqueness in the technology industry if we talk about iPhones, iTunes, or Macbook. You will never see an Apple user switching to some other brand. Apple manufacture 3 models of laptops that come in different screen sizes and with different specifications.

Dell is an American multinational computer technology company formerly known as PC’s Limited with a revenue of US$ 94 billion. Dell was founded by Michael Dell on 1 February 1984. Dell manufactures some products, including personal computers, servers, peripherals, smartphones, televisions, and much more. Dell is also one of the most popular laptop brands in India, popularly known for its innovation, and its laptops have been one of the biggest sources is evident in the newest XPS 13 laptop. Dell also provides services that include doorstep pickup and delivery from the customer service department, making it a top laptop brand in India under 40,000. With its Alienware launch, Dell has become one of the favorite Gaming Laptop brands in India.

HP or Hewlett Packard is an American multinational computer technology company headquartered in Palo Alto, California, with a revenue of US$ 15.9 billion. HP deals in a range of products such as Printers, Software products, Cloud products, Scanner, Cameras, Desktops, Laptops, and Notebooks. HP Laptops are one of the best laptop brands in India, popular for a balanced combination of functionality and style. HP laptops are ranked higher among consumer and office users. HP laptops are basically suitable for people who work in offices, students, and other work users. They provide up to 3 years warranty so you can net yourself some serious protection for your new laptop too.

Laptops manufactured by HP For Home and Office Use-

Lenovo Group Limited is a Chinese multinational company incorporated in Hong Kong and headquarters in Beijing, China. Liu Chuanzhi founded Lenovo on 1 November 1984 with a revenue of US$ 50.71 billion (2020). Their innovative 2-in-1 Laptops are laptops as well as tablets that will amaze you. Lenovo laptops are generally dark or black in color, suitable for the working class. Lenovo’s latest laptops are simple to use, and the build quality is powerful. Lenovo is considered the Budget laptop brand in India to give you value and performance in a single package.

Laptops manufactured by Lenovo are:

ASUSTek Computers Inc. or ASUS is a Taiwanese multinational computer and phone hardware and electronics company headquartered in Taipei, Taiwan. Asus was founded by Ted Hsu, M.T. Liao, Wayne Tsiah, T.H. Tung, and Luca D.M. on 2 April 1989. Asus Laptops are all-rounder laptops and smart choice as it is budget-friendly, user-friendly, and compact. They manufacture solid and straightforward designs and make it one of the top most popular laptop brands in India. With Asus laptops, you will get high-quality configuration, upgraded programs to satisfy any need and preferences.

Laptops designed by Asus are:

Samsung Group or Samsung is one of the popular South Korean multinational conglomerates headquarters in Samsung Town, Seoul. Samsung was founded by Lee Jae-Yong on 1 March 1938 and involved various businesses and subsidiaries that include Samsung Electronics, Samsung Engineering, Samsung Life Insurance, Samsung Heavy Industrie, and much more. This South Korean company has earned the name in consumer electronics around the world. Samsung is known for its affordable business laptops but now famous for its enhanced security features, ergonomic designs, long battery life, touch display feature, and fast processors. Samsung’s Chromebook series is one of the best-selling laptops in India list.

Laptops designed by Samsung are:

Acer is another Taiwanese multinational hardware and electronics corporation specializing in advanced electronics technology and headquartered in Xizhi, Taipei city. Acer was founded by Stan Shih, Carolyn Yeh, George Huang on 1 August 1976 and deals in various products include desktop PCs, laptop PCs, Tabs, Servers, storage devices, and accessories under its Predator brand. Acer is also considered the 6th largest vendor in the world as of January 2021. Acer is a brand sign of affordability and one of the top laptop brands in India.

Laptops manufactured by Acer are:

Vaio is a sub-brand of SONY  brand in the Laptop segment. Vaio is the Video Audio Integrated Option acronym, which denotes the brand’s positioning as a product that performs on both the video and audio front. Vaio was founded in 2014 as an independent corporation which is headquarters in Nagano, Japan. It provides one of the top laptops in India with affordable prices and budget ranges. Vaio launched its first series of Notebooks with a price ranging from Rs 80,000 – Rs 1,25,000, which was very costly.

Laptops manufactured by Vaio are:

Huawei is a Chinese multinational technology company headquarters in Shenzhen, Guangdong. Huawei is one of the most popular brands known for its cutting-edge technology that has defined the progress of digital technology for electronics worldwide. Huawei Laptops are available online as well as in all major electronic retail stores. They have some great features and specifications that make them one of the most trusted laptop manufacturers.

Laptops manufactured by Huawei are:

Google LLC is an American multinational technology company that works under Alphabet Inc. Google’s flagship was founded by Larry Page & Sergey Brin in September 1998 and headquarters in California, United States. Google Laptops are used in many places as educational tools. Google Laptop runs on Chrome Operating System, which is different from Windows and Mac OS. In India, you can find three series of Google laptops.

Laptops manufactured by Google are:

Q.1- Which is the Best Laptop brand in India?

Apple is the best laptop brand in India with great design and class.

Apple’s MacBook Air is the best laptop launched in 2021.

Dell computers are considered to be better than HP. HP has some great laptops; across their whole range, many can’t compete with other brands. At the same time, Dell has a pretty great range of laptops across the board.

Alan Kay, who worked for Xerox PARC, first created the concept for the laptop computer. He referred to it as the Dynabook.

Published in A to Z, Electronics, Gadgets and Tech