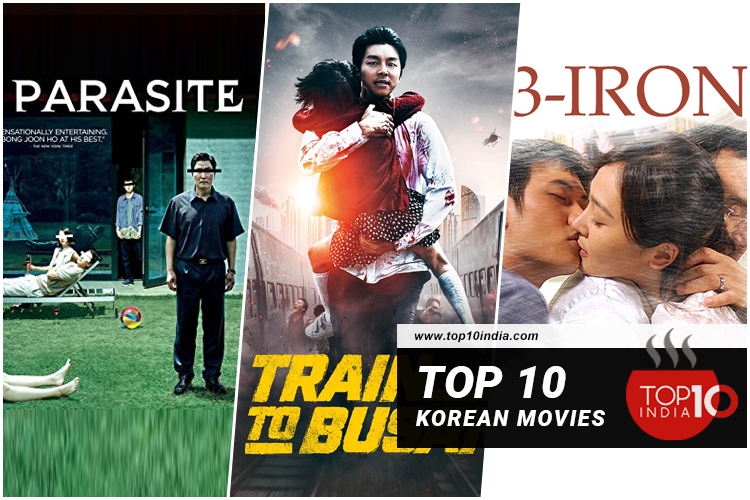 Top 10 Korean Movies | List of Famous Korean Movies: Based on research and study, we have mentioned the Top 10 Korean Movies. These movies are top-rated in the Korean film industry, although in India. We have defined all things carefully like Box office collection, rating, Budget, etc. This list may give you the right opinion for the top Korean movie.

In this list, we have mentioned the Top 10 Korean Movies. These movies are blockbusters and nowadays people saw it repeatedly. We have to give rank to these movies according to their Box Office collection, rating, and popularity, all of these qualities should have in these movies.

The parasite is a 2019 South Korean black comedy thriller film. Parasite won a leading four awards at the 92nd Academy Awards: Best Picture, Best Director, Best Original Screenplay, and Best International Feature Film. The parasite is the first South Korean film to receive Academy Award recognition and three films to win both the Palme d’Or and the Academy Award for Best Picture. The movie’s plot is the struggling Kim family sees an opportunity when the son starts working for the wealthy Park family. Soon, all of them find a way to work within the same household and start living a parasitic life.

No.2 Train To Busan

Train To Busan is a 2016 South Korean action horror film. The film set a record as the first Korean film of 2016 to break the audience record of over 10 million theatergoers. The film premiered in the midnight screenings section of the 2016 Cannes Film Festival on 13 May. The movie’s plot is that a chemical leak at a biotech plant causes the start of the zombie apocalypse that rapidly spread across South Korea.  Fund manager Seo Seok-woo is a cynical workaholic and divorced father. His daughter Su-an wants to spend her birthday with her mother in Busan.

3-iron is a 2004 romantic drama film. The film’s title is derived from a type of golf club used prominently throughout the narrative. 3-iron premiered in competition at the 61st Venice International Film Festival in September 2004. The movie’s plot is Tae-Suk is a lonely drifter who spends his nights in one empty vacation home after another. However, Tae-Suk is not your usual squatter, as the courteous young man always makes sure to show his absence.

Burning is a 2018 South Korean psychological thriller mystery drama film. It is based on the story “Barn Burning” from The Elephant Vanishes by author Haruki Murakami. The plot depicts a young deliveryman, Jong-Su, who runs into his childhood friend, Hae-mi. They soon meet an enigmatic young man named Ben, who Jong-su becomes suspicious of and believes Hae-mi is in danger. It was selected as the South Korean entry for the best foreign-language film at the 91st Academy Awards.

The Host is a South Korean monster film. The film concerns a monster kidnapping a man’s daughter and his attempt to rescue her. According to the director, his aspiration came from a local article about a deformed fish with an S-shaped spine caught in the Han River. It won several awards, including Best Film at the Asian Film Awards and the Blue Dragon Film Awards. It was released on a record number of screens in its home country on July 27, 2006.

Extreme Job is a 2019 South Korean action comedy film. The film has become a major box office success in South Korea and surpassing 10 million ticket sales in just 15 days. Extreme Job is the second most-viewed film in the South Korean film industry. The movie’s plot is that narcotics detectives work undercover in a chicken joint to bust a gang of organized criminals. Things take an unexpected turn when their new recipe suddenly transforms the run-down restaurant into the hottest eatery in town.

Oldboy is a South Korean neo-noir action thriller film. It is based on the Japanese manga of the same name written by Garon Tsuchiya. The film follows the story of Oh Dae-Su, Who is imprisoned in a cell that resembles a hotel room for 15 years without knowing the identity of his captor or his motives. When he is finally released, Dae-su finds himself still trapped in a web of conspiracy and violence. The Film won the Grand Prix at the  2004 Cannes film festival.

No.9 A Taxi Driver

A Taxi Driver is a 2017 South Korean historical action drama film. It was selected as the South Korean entry for the Best Foreign Language Film at the 90th Academy Awards. The plot of the movie is that, In 1980, a foreign journalist hires a down-on-his-luck taxi driver to take him to Gwangju, South Korea. They soon arrive to find a city under siege by student protesters and the military. It was the second highest-grossing film of 2017 in South Korea.

Forgotten is a South Korean psychological thriller film. The movie’s plot is that when his abducted brothers return, seemingly a different man with no memory of the past 19 days, Jin-Seok chases after the truth behind the mysterious kidnapping. It also earned Best Short and Best Screenplay Awards in the 2017 Gold Movie Awards.

Based on research and study all these Movies comes under the Top 10 Korean Movies. These movies are very famous of all time and popular also. There are some other Korean movies that are very popular but we have not define them in this list like Stell Rain, The Witch, and the call these Korean movies are in trending nowadays but we had not kept in this list.