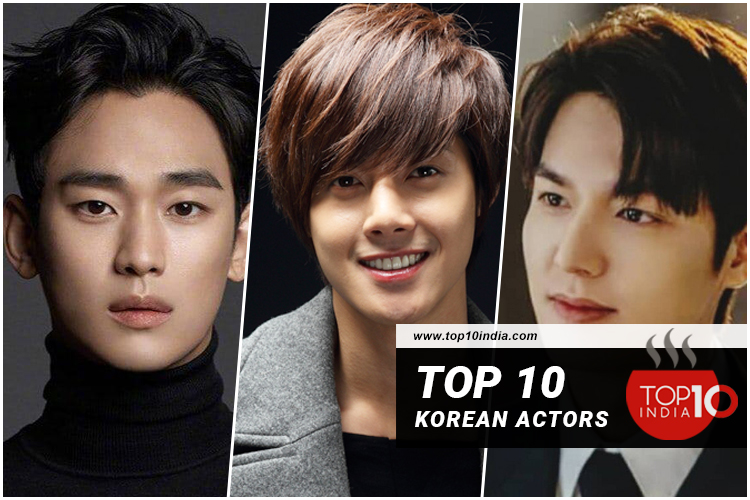 Top 10 Korean Actors | List of Most Popular Handsome Actors:- Korean Actors are known not just for their incredible talent but also for their seemingly everlasting youthful appearance. As the capital for all things skincare and beauty, South Korea places great emphasis on beauty and looks. Naturally, actors would fall in the same bracket.

This article has rounded up some of the top Korean celebrities in music, film, and tv who have made jaws drop in admiration after finding out their age. These celebrities are youthful not just in terms of their looks but also with their personalities, Reiterating that age is just a number.

Kim Soo-Hyun is a South Korean actor best known for his roles in television dramas. He was born on February 16, 1988. Kim’s father is Kim Chung-Hoon and was a lead singer of the 80’s band “Seven Dolphin.” Kim’s mother encouraged him to take acting classes during his school years to help him overcome his shy and introverted personality. He made his television debut with a supporting role in the 2017 family Sitcom Kimchi Cheese Smile. His success in television drama established him as a top Hallyu star and one of the highest-paid actors in South Korea. Kim has won numerous accolades throughout the course of his career, including the best actor and 48th Baeksang Arts Awards for his acting in the historical drama series Moon Embracing the Sun.

Kim Hyun-Joong is a South Korean actor, singer, and songwriter. He is a member of the Boy Band SS501. Kim was born on June 6, 1986, in Seoul. Kim released his first Korean solo album, Break Down, in 2011, and due to his commercial success, Kim was considered one of South Korea’s biggest Hallyu stars of the early 2010s. Kim Hyun-Joong won the ‘Best Asian Artist Award’ and the ‘Best Artist Award. He is very popular in Korea and is considered a style icon. Kim Hyun Joong’s most famous studio albums include ‘Unlimited’ and ‘Imademo.’ He excelled in extended plays in Korean and Japanese languages.

Lee Min Ho is a South Korean actor, singer, and model. He gained widespread fame worldwide with his role as Gun Jun-Pyo In Boys Over Flowers(2019). Which also earned him the best new actor at the 45th Baeksang Arts Awards. He was born on June 22, 1987. The success of Lee’s television series established him as a top Hallyu star. He is the most followed South Korean actor on social media. Lee had hoped to become a professional football player. His father was a soft parent, whereas his mother was a strict one. He has an older sister, Lee Yun Jeong. Lee is the CEO of MYM Entertainment.

Ji Chang Wook is a South Korean actor and singer. He rose to fame for playing the lead role of Dong-hae in the daily drama series smile again. He was born on July 5, 1987, in Anyang in South Korea. He lost his father when he was in elementary school. Therefore he was raised by his single mother. In 2011, he played the titular character in the south Korean TV series ‘Warrior Baek Dong Soo.’ He played his first villain role in the 2012 TV series ‘Five fingers’. Ji Chang Wook has won several awards throughout his career so far. These include three KBS Drama Awards, one SBS Drama Award, One MBC Drama Award, and one China TV Drama Award.

Lee Joon Gi is a South Korean actor, singer, dancer, and model. He rose to fame on his first leading role playing a clown in the critically acclaimed film The King and The Clown. He was born on May 17, 1982. He is also known for his work in the Moon Lovers: Scarlet Heart Ryeo as Wang So. The popularity of his work overseas, especially in Asia, has established him as a top Hallyu star. He received the Outstanding Korean Actor Honour at the Seoul International Drama Awards. He has received many other awards over the course of his career.

Lee Seung Gi is a South Korean singer, actor, host, and entertainer. Lee’s success as a singer, actor, and host earned him the “Triple Threat” entertainer. Recently, Lee has been selected as one of the 200 actors to feature in the Korean actors 200 campaign, run by the Korean Film Council. He was born on January 13, 1987, in Banghak-Dong, Dobong District, South Korea. He received worldwide fame as an actor for ‘Brilliant Legacy.’ He has won more than a dozen awards each for his acting roles and music and remains one of the most well-known faces in the South Korean entertainment world.

Lee Jong Suk is a South Korean actor and model. He debuted in 2005 as a runway model, becoming the youngest male model ever to participate in Seoul Fashion Week. Lee majored in Professional  Motion Pictures and Art at Konkuk University and graduated from the university in 2016. He was born on September 14, 1989, in Suwon, South Korea. His first professional role in the TV series ‘Prosecutor Princess’ where he played a supporting role. He has earned several Important awards, including the Korean ‘Popular Culture and Arts Award’ and the ‘Korea Drama Award.’

Park Seo-Joon is a South Korean actor. He was born on December 16, 1988, in Seoul, South Korea. He is best known for appearing in the TV series ‘She Was Pretty, ‘Pots of Gold,’ ‘Kill Me, Heal Me, and ‘One Warm Word.’ He held his first-ever fan meeting at Goyang Eoullimnuri Arts Center and greeted more than 2500 fans. He earned the ‘Best New Actor award at the 2nd APAN Stars Awards function for his performance in ‘Pots of Gold.’ He also won the ‘Best Style Of The Year’ award at the 7th Herald Donga Lifestyle Awards Event. He has also received the MBC Drama Awards multiple times to contribute to TV dramas ‘Kill Me, Heal Me’ and ‘She Was Pretty.’

Choi Jin Hyuk is a South Korean actor. He was born on 9 February 1986 in Mokpo, South Korea. He gained attention for his supporting roles in ‘Gu Family Book’ and ‘The Heirs.’ After winning the 2006 season of the Korean Broadcasting System’s Survival Star Audition reality talent competition, he launched his acting career. In 2019, Choi was cast in the thriller drama Justice. In 2020 Choi starred in the science fiction action drama Rudgal.

Seo Kang Joon is a South Korean actor and singer who is a member of the group Surprise. He gained recognition with his role in the television series Cheese in the Trap. He was born on October 12, 1993, in Gunpo, Gyeonggi Province, South Korea. He won the Best New Actor award at the 7th Korea Drama Awards. In 2014 Seo joined the SBS variety show Roommate as a cast member. He won the Hot Star Award in the 8th Korea Drama Awards.

Based on Research and study, we have mentioned the Top 10 Korean Actors. There are lots of Korean actors who are very popular in many countries. Every actor and actress worldwide have an ultimate dream to get the opportunity to Starr in a Hollywood movie. This dream and aspiration are not different when it comes to Korean actors and actresses. They try to up their performance and give out their best in movies/drama. So, according to that, we have given rank or position in the list of Top 10 Korean Actors because of their popularity, fan following, etc.