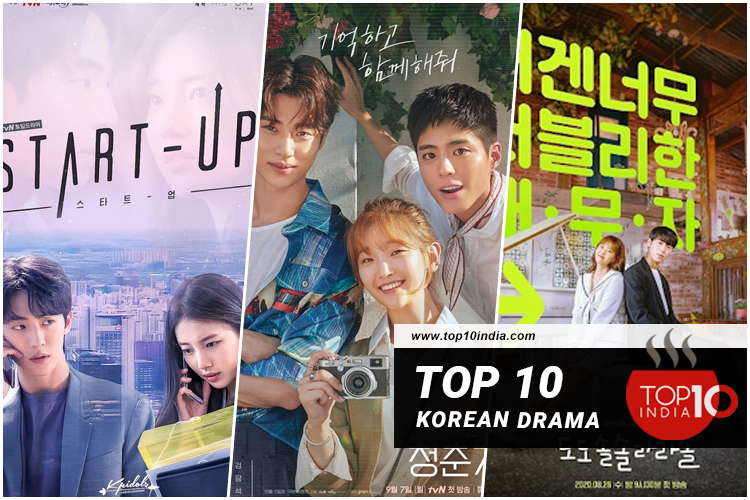 Top 10 Korean Drama | Everyone Must Need To Know Story

Top 10 Korean Drama:- Korean Drama is a word that refers to Korean pop culture, including k-drama, k-pop, and k-food that are well-liked by foreigners. Particularly, K-drama became popular in the early 2000s in countries not limited to Asia and the Middle East, Europe, and North and South America. Teenagers are in adolescence, and they have a perfect fantasy about love. Korean Drama weaves a perfect fairy tale, Romantic, Beautiful, and exaggerate. Most of the girls are ordinary and common, and most have cinderella dreams.

In this list, we have mentioned the Top 10 Korean Drama. This list is set according to their popularity, Rating, and views. Korean Drama is the best option for entertainment, and Start-up Korean series is the most popular series on Netflix, and it comes on the top of the list of Top 10 Korean Drama.

Start-up is a South Korean television series. The plot of the series revolves around a woman who has dreams of becoming an entrepreneur like Steve Jobs and her love triangle between a man who is secretly her first love and another man who is pretending to be her first love. It aired on TvN from October 17 to December 6, 2020. It is available for streaming on Netflix. It is on the list of Top 10 Korean Drama.

No.2 Record of youth

Record of youth is a South Korean television series. The editing technique of foreshadowing has been used in many episodes of this series. It is aired on TvN from September 7 to October 27, 2020, and is available for streaming worldwide on Netflix. It’s in 2nd position in the list of Top 10 Korean Drama. The drama follows the lives of three youth in the contemporary fashion industry. They strive to achieve their dreams and love without despair.

Do Do Sol Sol La La Sol is a South Korean television series. It was scheduled to premiere on KBS2 and Netflix on August 26, 2020. However, KBS its premiere date to prevent the spread of COVID-19. The series aired from October 7 to November 26, 2020. The plot of the is that A romantic comedy about an energetic down-on-her-luck-riches-to-rags pianist named Goo Ra-Ra and a mysterious warm-hearted multi part-time worker Sunwoo Joon and those who gather in La LA Land, a small piano institute in the south Korean countryside with their own secrets, pain, and stories to tell.

No.4 When My Love Blooms

When my love blooms is a 2020 South Korean television series, it is aired on TvN every Saturday and Sunday at 21:00(KST) time slot from April 25 to June 14, 2020. The plot of the series is that Han Jae-Hyun and  Yoon Ji-soo met and fall in love when they were university students. Twenty years later, They cross paths once again. Han Jae-Hyun is a man in his 40’s. He is a handsome, ambitious, and successful businessman who pursues wealth and honor, while Ji- Soo is a mother and contract worker living a difficult life.

No.5 Tale of the Nine-Tailed

Tale of the Nine-Tailed is a 2020 south Korean television series. It is aired on TvN from October 7 to December 3, 2020, every Wednesday and Thursday at 22:30(KST) with 16 episodes. The Plot of the series is that A Gumiho named Lee Yeon abdicates his position as the guardian mountain spirit of Baekdudaegan to search for the reincarnation of his one true love, Ah-Eum. He follows her soul along the Samdo River and marks her with a fox bead so he can find her when she is reborn.

No.6 Crash Landing On You

Crash Landing On You is a 2019-20 south Korean television series. The series aired on TvN in South Korea and on Netflix worldwide from December 14, 2019, to February 16, 2020. It is highest rated TvN drama and the highest-rated South Korean TV drama in cable television history. The plot of the story is that Yoon Se-Ri is an heiress to conglomerate in South Korea. One day, While paragliding, an accident caused by strong winds leads Yoon Se-Ri to make an emergency landing in North Korea. There, she meets Ri Jeong-Hyeok, who is a North Korean army officer. He tries to protect her and hide her. Soon, Ri Jeong-Hyeok falls in love with Yoon Se-Ri.

Itaewon Class is a 2020 South Korean television series. It is the first series to be produced by the film distribution company Showbox. It aired on JTBC in Korea from January 31 to March 21, 2020, and is streaming worldwide on Netflix. The series won best drama series at the 25th Asian Televisions Awards. The story’s plot is that In 2006 high schooler Park Sae-Ro-Yi was jailed for 2 years after attempting to kill Jang Geun-Won. Geun-Won is the son of Jang Dae-Hee and heir to the Jangga Group.

It’s okay not to be okay is a South Korean romance drama television series. The series was broadcast on TvN and Netflix from June 20, 2020, to August 9, 2020. It was the most popular show of 2020 in the romance genre on Netflix in South Korea. The series was nominated for eight awards at the 57th Baeksang Arts Awards. The story’s plot is that Moon Gang-Tae lives with his older brother Moon Sang-Tae who has autism. They frequently move from town to town ever since Sang- Tae witnessed their mother’s murder.

No.9 The World of the Married

The World of the Married is a 2020 South Korean television series. It aired on JTBC on Friday and Saturday from March 27 to May 16, 2020. The series is the highest-rated drama in Korean cable television history. It tells a story of a married couple whose betrayal of one another leads to a whirlwind of revenge, grief, forgiveness, and healing.

Hospital Playlist is a South Korean television series. It is the second installment of the wise life series. The first season aired on TvN every Thursday from March 12 to May 28, 2020. Each episode was released on Netflix. By the conclusion of the first season, the series became the tenth highest-rated Korean drama in cable television history. It was the most viewed series in South Korea on Netflix in 2020. Hospital Playlist portrays the story of doctors and nurses working and patients admitted to Yulje Medical Centre. The Television series revolves around five doctors who have been friends since they entered medical school in 1999.

Memorist is a 2020 South Korean Television series. Based on the 2016-18 Daum Webtoon of the same name by Jae Hoo, it aired on TvN from March 11 to April 30, 2020. The plot of the series is that Dong Baek solves crimes as a detective in the police force with the power to read people’s memories. When a string of serial murders happen, Dong  Baek teams up with talented criminal profiler Han Sun-mi to stop the killer and prevent further deaths.

Based on research and study, we have prepared this list of Top 10 Korean Drama in India. Korean Drama is mostly viewed in India, and India’s people see so many Korean series. The above series is prepared according to the qualities taken in mind like rating, views, and Genre.