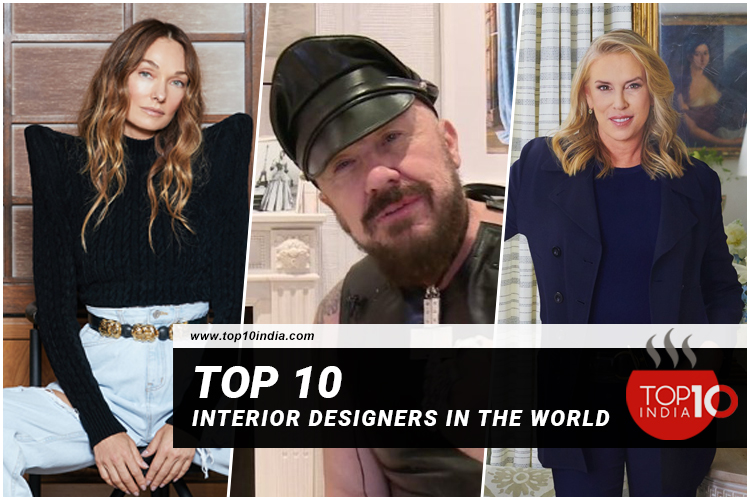 Top 10 Interior Designers In The World: Interior design is the art and science of enhancing the interior of a building to achieve a healthier and more aesthetically pleasing environment for the people using the space. An interior designer is someone who plans, researches, coordinates, and manages such enhancement projects. Interior design is a multifaceted profession that includes conceptual development, space planning, site inspections, programming, research, communicating with the stakeholders of a project, construction management, and execution of the design.

Top 10 Interior Designers In The World

In this article, we are going to discuss about the top 10 interior designers in World. In this list, we have classified these designers on the basis of their networth, designs, art, planning, programming, and many more details. Here below is the list of top 10 famous interior designer in the World.

Kelly Wearstler is an American designer. After founding her own design firm Kelly Wearstler Interior Design (or KWID) in the mid-1990s, her ensuing work within the hotel industry built her reputation in California, with The NewTork Yorker dubbing her “the presiding grande dame of West Coast interior design.” According to The New York Times “her playful, elegantly over-the-top designs for the Avalon Beverly Hills changed the look of boutique hotels around the world.

Peter Marino (born 1949) is an American architect and Fellow of the American Institute of Architects. He is the principal of Peter Marino Architect PLLC, an architecture and design firm which he founded in 1978. The firm is based in New York City with 160 employees and offices in Philadephia and Southampton. Marino began his architectural career working for Skidmore, Owings & Merrill, George Nelson, and I.M. Pei. In 1978, Andy Warhol hired him to do a renovation project for his townhouse on the Upper East Side of Manhattan and the third incarnation of Warhol’s Factory at 860 Broadway.

Since founding her firm over 20 years ago, Victoria has designed an extensive number of versatile projects throughout the country, from the most elegant urban residences to casual weekend retreats, noted residential developments, and innovative corporate interiors. She is continually featured in such publications as Architectural Digest, Elle Décor, W, Town & Country, Harper’s Bazaar, Traditional Home, In Style and Interior Design. Vogue exclaimed that she defies the old school implications of the term ‘lady decorator.’

Since 1999, yoo has worked with international developers, designing landmark residential and hotel projects throughout Asia, Australia, Europe, Africa, North and South America and the Middle East. ”YOO is a pioneering vision for living and the result of a partnership between property entrepreneur John Hitchcox and the ubiquitous designer, Philippe Starck.”

Richard Meier is an American abstract artist and architect, whose geometric designs make prominent use of the color white. A winner of the Pritzker Architecture Prize in 1984, Meier has designed several iconic buildings including the Barcelona Mueseum of Contemporary Art, the Getty Center in Los Angeles, and San Jose City Hall. eier was born to a Jewish family, the oldest of three sons of Carolyn (Kaltenbacher) and Jerome Meier, a wholesale wine and liquor salesman, in Newark, New Jersey.

Alberto Pinto (1943–2012) was a photographer and interior designer based in Paris. He designed the interiors of apartments, corporations, hotels, yachts, and jets. He had a home collection of his own and collaborated with many manufacturers, such as Raynaud and Pierre Frey.  His photography agency specialized in decoration and interior design. This focus on design led Pinto to take up interior design almost four decades ago.

Founded by one of the best American interior designers and architects Alan Wanzenberg, the firm handles a select volume of meticulously detailed and carefully constructed projects, various clie,nts including individuals, families, and developers. The style and character of the firm’s designs convey a restrained luxury and authenticity while emphasizing a high level of design resolution and craftsmanship in accord with each client’s program.

No.9 Emily Summers (Top 10 Interior Designers In The World)

No.10 John Barman (Top 10 Interior Designers In The World)

John Barman renowned takes a twenty-first-century approach to design for injecting inteJohn Barman renowned rigors with contemporary glamour and color. He seamlessly mixes mid-century and vintage pieces alongside modern furnishings, creating a look with sophistication. With a career in interior design that spans over 20 years of high-end residential projects, he takes a very personal and individual approach with much of the inspiration tailored to client wishes that make each project unique.

Q- Who is the highest paid interior designer in the world?

A- Kelly Wearstler is the highest paid interior designer in the world.

A-  Kelly Wearstler is in the first position in the list of top modern interior designers.

Q- How would you find a best interior designer?

Published in A to Z, Country and Interior Designers