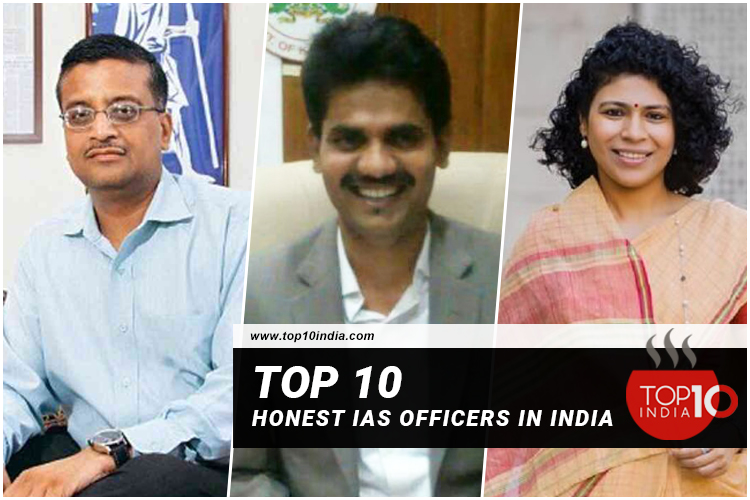 Top 10 Honest IAS Officers In India: Ashok Khemka is the number 1 honest IAS Officer In India who had been very honest and dedicated for his post and has always been against the wrong. IAS officers are the government officials of our Country, India, who work day and night for the progress and prosperity of the nation. These officers study hard, appear in various tests and interviews that are quite tough to clear, and are not everyone’s cup of tea and become the IAS officers of India.

It is a very responsible task after becoming an IAS officer and maintaining discipline, and standing upright. At the same time, you fight the odds in the system of your country and get rewarded. On the other hand, where you face bureaucrats and corruption and inefficiency and what not. It is not that easy to perform the duties of being an IAS Officer as the jobs appear to be lucrative, but it comes with plenty of responsibilities towards the nation.

Ashok Khemka is an IAS officer of the Haryana cadre of the 1991 batch. He has been frequently transferred a couple of times in the past, and his name too has been spotted in transfers from one place to another. The numbers tell that he has been transferred 51 times in the job tenure of 24 years in this service. He is the pillar of strength and an epitome of integrity and righteousness.

From exposing the most high-profile cases, his work for the nation is highly recommended. Ashok Khemka exposed the land deal of Robert Vadra with DLF in the year 2012, which highlighted the corruption of Rs. 20,000 crore to Rs. 35,000 crore.

Many of the charge sheets were filed against Ashok Khemka, but he did not stop doing his good work, and these are the characteristics of an honest IAS officer who is never afraid of going right.

D.K. Ravi had been an IAS officer of the 2009 batch of the Karnataka Cadre and remained posted as the District Collector in the Kolar District of Karnataka. DK Ravi had launched a crackdown on illegal mining projects and was being carried out in the area without anyone’s consent and knowledge.

After some time, he was transferred and became the Additional Commissioner of the Commercial Taxes. He is famous for carrying out raids on high-profile business tycoons and has exposed too many tax-evaders as defaulters.

On 16th March 2015, this abled IAS Officer was found dead at his home. As per the CBI, DK Ravi committed suicide, but his family members and social activists believe he was murdered.

Durga Shakti Nagpal is a woman who is an inspiration for young girls as she is a very hardworking and honest IAS Female officer in India. She had once been suspended by Akhilesh Yadav, a member of the Samajwadi government, to demolish a mosque wall.

Her husband Abhishek Singh is also an IAS officer harassed by the governing authorities and was suspended with the blame of mistreating a Dalit teacher.

Durga Shakti exposed a land scam in Mohali in the initial phase of her career when working as a trainee IAS officer in Punjab.

Armstrong Pame is an IAS officer of the 2008 batch. He is the first person from the Zeme Tribe of the Naga people who got the chance to work for the elite services. He was posted as the SDM of Tousem District and was shocked to see the daily struggles and hardships that the local people faced; due to the poor conditions of the road.

His task was to build the road, and when he was moved by the poor condition of the roads that prevailed there, he, without the support of any of the government, got successful in building a 100 km road that linked Manipur with Nagaland and Assam.

Using the social media platform to raise funds, this officer was able to raise Rs. 40 lakh in which the government played no role. He was thus called a “Miracle Man” by the people of Tousem.

Tukaram Mundhe is an IAS officer of the 2005 batch who performs his duties in the Maharashtra Cadre, and he is known for his devotion and uprightness. He is also famous for the serious duty that he does to solve problems and curb corruption.

He used to resolve complaints of the citizens every Sunday during his program ‘Walk with Commissioner’, which had been very popular. Tukaram Mundhe was transferred 9 times in his 12 years of service because of his honest attitude and determination.

Raju Narayana Swamy being an IITian from Madras, is an IAS officer of the Kerala cadre. He is famous for his hatred of corruption. He was transferred 20 times in the service tenure of 22 years. Sometimes, he was also used to work with his juniors.

Because of his honesty, he was forced to leave when he refused to work, ignoring the corrupt politicians. Minister T U Kuruvilla was made resigned when Raju Narayana investigated against the minister.

Raju stated that in his service life, he always fought against corruption.

Anshul Mishra is an IAS officer of the Tamil Nadu cadre who has made remarkable achievements with his hard work and dedication. As a collector of Madurai during his service tenure, he introduced accountability in the administration where the other people working were held responsible for their work too and brought transparency by forming a separate complaint cell and also created a Facebook page where people could address the grievances.

He worked to stop the illegal granite quarrying and was credited for facilitating a fair recruitment process of the Anganwadi workers. He was very successful with his novel approach as he was able to rectify almost 80% of the issues reported by the people.

Yashwant Sonawane is an IAS Officer who fought till his last breath for the wrong. In 2011, Yashwant Sonawane was murdered by the oil adulteration mafia while serving as Additional District Collector of Malegaon in Maharashtra.

In an investigation of CBI, it was found that he was killed and also that he had demanded a bribe from the same mafia.

U Sagayam is an IAS officer of the 1991 batch of Tamil Nadu cadre. He has been transferred 25 times in his service of 27 years; such a big number makes us feel he was truly dedicated and self-motivated. A Pepsi bottling plant was closed by him when he found dirt in several bottles and took it down on sand mafia.

In the year 2004, U Sagayam felt some irregularities in subsidized cylinders. As per the data of the year 2009, he had a deficient bank balance, just Rs. 7172, and his house was bought with just Rs. 9 lakh.

Among the top 10 honest IAS Officers In India, Rashmi is an IAS officer of the Karnataka cadre, and she has been transferred 20 times in the service of 18 years. Rashmi always fights against the corrupt education system, being she is in favor of education being spread across the nation.

She researched the Administrative Training Institute of Mysore and observed many irregularities that were worth Rs. 100 crore between the years 2008-2014. She was scared by an angry mob for this exposure.

She had conducted investigations into the engineering and medical colleges that political leaders manage in her past times.

Who is the best IAS officer in India?

Ashok Khemka is the best IAS officer in India.

The Cabinet Secretary is the highest post in IAS.

How many IAS are there in India?

Which degree is best for IAS?

The graduation degree is the best for IAS.