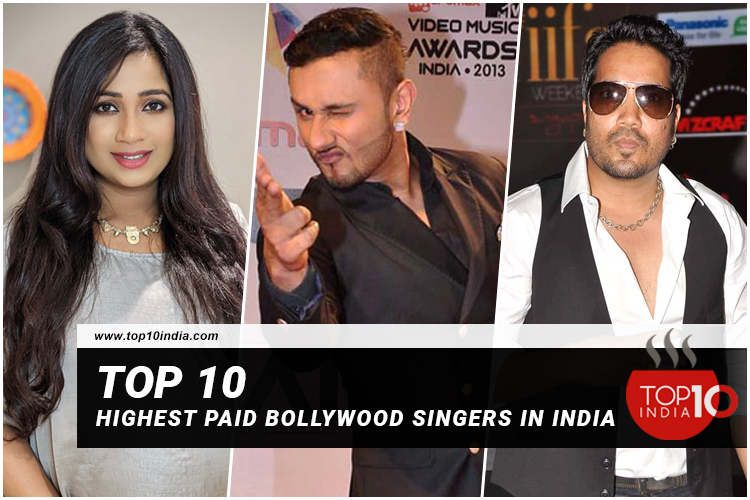 Top 10 Highest Paid Bollywood Singers In India: Shreya Ghoshal is the number 1 richest Bollywood singer in India who sings melodiously and lures the hearts of listeners. The Bollywood industry is brimming with talented individuals, and it is constantly on the lookout for new talent in India and other nations. Bollywood singers have a tremendous voice, thus they live in the hearts of the people and are paid a lot of money for one song. Bollywood singers play an essential position in the industry, and they strive to perform the best song that will excite the audience.

Bollywood music has a big fan following in the music industry all around the world. By virtue of their lovely voices, India’s wealthiest singers have carved a particular place in the hearts of the public. Singers have gained notoriety, fame, and fortune as a result of their work in music. When it comes to the richest singers in Bollywood, there is a long list of names that come to mind which we have mentioned as the top 10 highest paid Bollywood singers in India.

Shreya Ghoshal is a Bollywood darling queen who has a stunning voice. She is a well-known singer in both India and Asia. She paid the highest per-song fee. She charges Rs. 25 lakh for a single song. Sanjay Leela Bhansali saw Ghoshal when he rose to stardom on a singing reality show. She landed a coveted slot in Bollywood after singing a song in the super-hit film “Devdas.” She judges many singing reality shows in addition to her great singing career.

Honey Singh, continues to control the hearts of young people across the country. The singer has an audience of all ages, both at home and abroad, and makes unabashed boasts about his modest origins and loud shout-outs to supporters for helping him reach the heights of fame he has. Yo-Yo Honey Singh is another of Bollywood’s highest-paid singers. He is renowned as a rapper-singer in the Bollywood industry.

Mika Singh has the ability to sing, perform, write, and compose songs. When it comes to the richest singers in Bollywood, he is ranked 3. Mika Singh, who has been in the profession for as long as he has, has expanded his wings in multiple directions. He not only sings for movies but also tours and does live shows, earning him more money than most of his peers. If that wasn’t enough, he has dabbled in acting.

Arijit Singh has a lovely and soulful voice and is one of Bollywood’s most brilliant singers. Arijit Singh becomes extremely popular in a matter of days. He received a large sum of money as a playback singer for the Hindi song “Tum Hi Ho” in the film Ashiqui 2. After he was paid 20 lakh for the song, his name was added to the list of highest-paid Bollywood singers.

Mohit Chauhan is perhaps Bollywood’s most versatile singer, with a flood of hit songs and a plethora of honours to his name. He is also the lead vocalist of the Indi-pop band ‘Silk Route,’ thus he has a lot of playback singing possibilities. In India, his plays and concerts are always packed with people of all ages.

Sunidhi Chauhan is a Bollywood female playback singer who is among the highest-paid singers in the industry. She asks for a fee of Rs. 12 lakh for each song. Sunidhi is a well-known Bollywood singer who was the first lady of her generation. She’s also had a great career on television as a judge and coach on a number of popular reality singing competitions.

Sonu Nigam is a singer who has accomplished everything and in the most unique ways. He has donated his voice to a variety of projects, including social events, Bollywood, and music videos. He has hosted music shows in the past. He also undertakes worldwide tours, which draw large crowds who are enthralled by his presentations. Not only that but he’s also dabbled in acting and served as a judge on a number of singing reality series.

The music composer team of Vishal Dadlani contributes talent to big-budget, star-studded films. The celebrity was recently tapped to serve as a judge on a singing reality program, proving the value of his abilities. To date, the legend has written many songs. Vishal along with being a singer is a songwriter and music composer too. He is half of the duo Vishal-Shekhar. A part of the Pentagram India that is India’s leading Rock Band.

Neha Kakkar, a 29-year-old singer, is now in high demand in Bollywood. Neha has risen to prominence, from solo albums to now being the voice of top Bollywood actresses, and with songs like Kala Chashma, it appears that she is destined for bigger roles. Neha Kakkar charges Rs 8 Lakhs for 1 song. Neha Kakkar is the voice of India, a glamourous performer and nowadays, has taken the number 1 position on Social Media.

Among the top 10 highest paid Bollywood singers in India, Neeti Mohan has been turning heads since her “Student Of The Year” debut with “Ishq Wala Love,” despite not being as well-known as her female competitors. She has also landed many tasks on the tiny screen as a result of her thriving bit of playback singing. She was born and raised in India’s capital, Delhi, and she fell in love with actor Nihaar Pandya, whom she married in 2019.

Who is the No 1 singer in India?

Shreya Ghoshal is the number 1 singer in India.

Who is the richest Bollywood singer in India?

Sonu Nigam is the richest Bollywood singer in India.

Who is the highest-paid singer in India in 2021?

Honey Singh is the highest-paid singer in India in 2021.