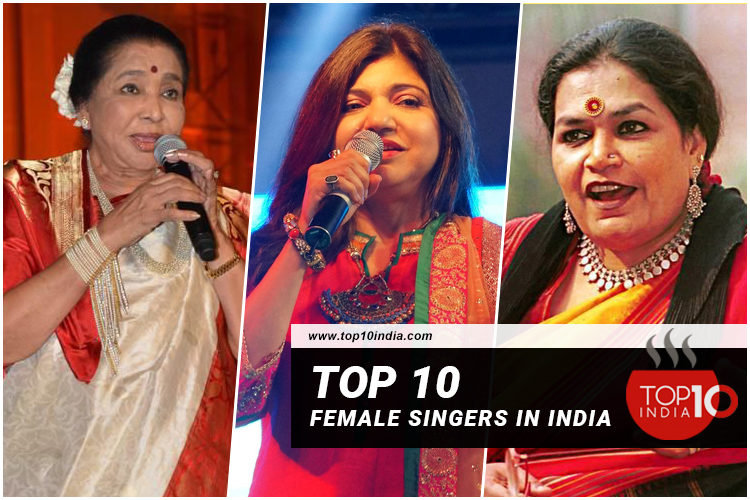 Top 10 Female Singers In India: Asha Bhosale is the number 1 female singer in India who is worldwide famous and has the best voice. Singing has close connectivity to music that we all love. Singers sing the songs that we love and relate to our situations. Singing is an art that can bring people close to each other and can also help us enjoy weddings and parties. Singers who sing the song are marvellous and sing melodiously to make us enjoy their songs.

Singing is a creation where you can touch souls with your song. There have been so many great singers in the country till now. Singing is a channel where you can relate to people. India is a country where we have capable singers of all time. Here is our list of the top 10 famous Female Singers In India.

Alka Yagnik is one of the best playback singers in India. She has delivered many favourites and famous songs in the cinema. She has also gained numerous awards for her performance in the industry. At the age of six, she practised singing the bhajans for Akashvani.

Usha Uthup is a famous playback singer of India. She composes Indian pop, jazz, filmi. She has delivered many famous songs in the music industry. The main song of the famous show Sarabhai V/s Sarabhai season 1 was composed and sung by the Usha Uthup.

Sunidhi Chauhan is again one of the most famous singers we have in the music industry. She possesses the judge position of various music reality shows in India. From the age of 4, she started singing at local meetings. She gained many awards in the field of singing. Sunidhi Chauhan has sung multiple item songs in numerous films.

A few of her popular songs are Mehboob Mere, Dhoom Machale from the film Dhoom in 2004, Beedi, Sajnaaji Vaari, Dance Pe Chance, Sheila Ki Jawani, and many others.

Neha Kakkar is a singing icon of modern time. She initiated her career by singing at multiple religious ceremonies. Started as a contestant of the reality show, she has been judging the show. Neha Kakkar has presented many famous songs in the industry. A few of her famous songs are Manali Trance, Second Hand Jawani, Sunny Sunny, Kar Gayi Chull, Aao Raja, Cheez Badi, and many more.

Monali Thakur is another singer who is one of the best singers in the Indian film industry. She has earned many awards for her voice. There are numerous hit songs in the movie industry provided by her. Not only this she judged a very popular singing reality show Sa Re Ga Ma Pa Li’l Champs in the year 2014. Some of the songs sung by her which gained huge popularity are Moh Mher famous oh Dhaage, Dum Laga Ke Haisha, Sawaar Loon, Cham Cham, and many more.

Neeti Mohan is one of the famous Female Indian Singers and a well-reputed and popular playback singer. She sings in multiple languages for instance in Hindi, Tamil, Telugu, Bengali, Marathi, Punjabi, English, and many others. She has received numerous awards for her singing. Some of her famous songs are Ishq Wala Love, Jiya Re, Bawra Mann, Sau Aasmaan, and many more songs.

Among the top 10 female Singers In India, Lata Mangeshkar is one of the best singers in India. She is also performing herself as a music director. She is very versatile and has been recording songs in Hindi, Bengali, Marathi, and Assamese. She is a female nightingale of India when it comes to her melodious voice.

Who is the No.1 female singer in India?

Asha Bhosale is the number 1 female singer in India.

Who is the top female singer in India?

Neha Kakkar is the top female singer in India.

Who has the best voice in female singers of India?

Shreya Ghoshal has the best voice.

Who is the melody queen and the richest female singer in India?

Lata Mangeshkar is the melody queen and the richest female singer in India.