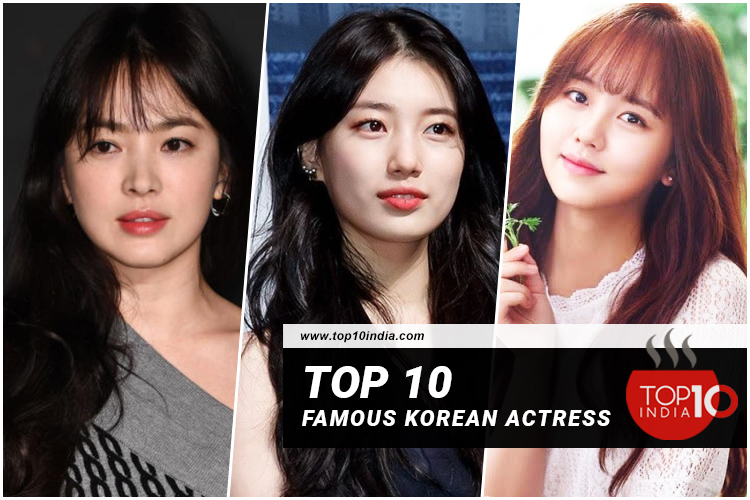 Top 10 Famous Korean Actress: Korean Movies and dramas have become more popular across the world. These dramas and movies are mostly watched in every country, even by those people who don’t know the Korean language. After watching these movies and dramas, its actors and actress are also becoming more popular in the world.

Here we are presenting you the list of the Top 10 Famous Korean Actress. These actresses are the ones, who have performed in many Korean movies and dramas. Their acting and beauty are making them more popular and successful day by day.

Song Hey Kyo is one of the most popular Korean actresses. She was raised by her mother as her parents got divorced when she was young. She studied Flim arts at Sejong University. In 1996, when she was 14 years old, she won SunKuyng Smart Model Contest. After this, she was seen in a small role in First Love, a television drama. She became a popular personality by the KBS drama ‘Autumn in my Heart’. Some of her most popular movies and dramas are – The Battleship Island, That Winter -the wind blows, Full House, All In, Descendants of the Sun, and more. In 2017, she was ranked 7th Korea Power Celebrity in Forbes Magazine.

Bae Suzy is a very known Korean actress, singer, and model. She studied at the School of Performing Arts Seoul. At first, she was an online shopping model. In 2009, she participated in Mnet Superstar K. She was a member of the newly formed group Miss A. She also became a fixed host for the show Music Core. She made her acting debut with ‘Dream High drama. She made her movie debut with the movie ‘Architecture 101’. She is the first Korean actress, who won a singer rookie award, drama rookie award, film rookie award. She has endorsed brands many brands of cosmetics, fashion, shoes, households, and many more. She is considered ‘The Nation’s first love’ in her home country. Some of her best movies and dramas are Live Your Strength, Ashfall, Gu Family Book, Uncontrollably Fond, While You Were Sleeping, and many more.

Kim So-Hyun is an amazing South Korean actress. She graduated from Yongin Munjung Middle School in 2015. She started her career in 2006 as a child actress in the drama ‘Ten Minute Minor’. She made her movie debut with Man Of Vendetta. She was one of the most demanded endorsers in 2015. Some of her most popular movies and dramas are Who are You- School 2015, Rooftop Prince, Bring It On, Ghost, Unforgettable, Sin Of A Family, I am the King, Pure Love, and more.

IU is a very popular South Korean singer, songwriter, and actress. From a young age, she was interested in singing. She started her singing training at Good Entertainment. She made her debut with her single track ‘Lost Child’. She performed this song live on the music program M Countdown. But the live was not soo successful. After this, she launched many songs and albums. And as time passed she became successful day by day. Some of her best dramas- Dream High, You are the best, Bel Ami,  The Producer, My Mister, Hotel del Luna, and more. She also hosts radio and tv shows.

Jun Ji-Hyun is a very popular actress and model of South Korea. She wanted to become a flight attendant but she changed her decision after her flight experience. Her family supported her to become a model because of her height and slim figure. She began her modeling career in 1997 as a model of Ecole Magazine. After this, she was also seen in my tv advertisement. She made her movie debut with the movie White Valentine. Her success in film and television made her a top Hallyu star. Some of her best movies and dramas are – You Who Came From The Stars, The Legend of the Blue Sea, Kingdom Season-2, Assassination, The Thieves, The Berlin File, and more.

Park Shin-Hye is a very amazing South Korean actress and model. She studied at Chung-Ang University. She made her first appearance in the music video Flower by singer Lee Seung-hwan. After this, she started her formal training in singing, dancing, and acting. In 2003, she played the younger version of Choi Ji-woo’s in Stairway to Heaven. In 2007, she made her movie debut with the movie Evil Twin. Some of her best movies and dramas are Prince Hours, You’re Beautiful, Heartstrings, My Cute Guys, Pinocchio, Doctors, and more. She has donated 100 Million Won to World Hunger Charity.

Park Bo-Young is a very well-known South Korean actress. In 2005, she appeared in a short film ‘Equal’. She was firstly seen in an advertisement for Korea Hydro & Nuclear Power. She made her official acting debut with the tv series Secret Campus. She got popularity with the comedy Scandal Makers, this movie was the no one top grosser of 2008. Some of her best movies and dramas are Oh My Ghostess, Strong Woman Do Bong Soon, Doom at Your Service, On Your Wedding Day, Hot Young Bloods, and more. In 2012, she donated $30 Million won to the non-profit organization, Good Neighbors.

Han Hyo-Joo ranks at the first position in the list of the top 10 famous Korean actresses. She is a very popular South Korean film and television actress. Her father was an air force officer and her mother was a school teacher. She studied theatre and film department at Dongguk University. She started her acting with a sitcom Nonstop 5 and a gangster comedy movie My Boss, My Teacher. After this, she was seen in a Spring Waltz, this series gave her more success. Some of her most popular movies and dramas- Treadstone, Always, Running Man, The beauty inside, Cold Eyes, Illang-The Wolf Brigade, and more.

Seo Yea-Ji is a very popular Korean actress. She wanted to be a Television news Presenter, she never thought about an acting career. She was convinced to try in movies by the CEO of made in Chan Entertainment. Her first step towards acting as an advertisement for SK Telecom. In 2013, she was seen in a short film Love. Later she debuted as an actress in a tvn sitcom Potato Star 2013QR3. Some of her best movies and dramas are – Another Way, Stay With Me, Recalled, Last, Save Me, Lawless Lawyer, It’s Okay To Be Not Okay, and more.

Lee Sung Kyung is a very known South Korean actress, model, and singer. She pursued her graduation from Dongduk Women’s University. In 2008, she competed in the local Super Model Contest. In 2014, she made her acting debut with a supporting role in the drama It’s Okay, That’s Love. In 2019, she was seen in a comedy movie Miss & Mrs. Cops. Some of her best tv shows and movies Once Again, About Time, Dr. Romantic 2, Love+Sling, Heart Attack, and more.

Who is the most famous actress in Korea?

Song Hey Kyo is the most famous actress in Korea.

Who are the most beautiful Korean actress?

In the above article, you can check out the most beautiful and most popular Korean actress.