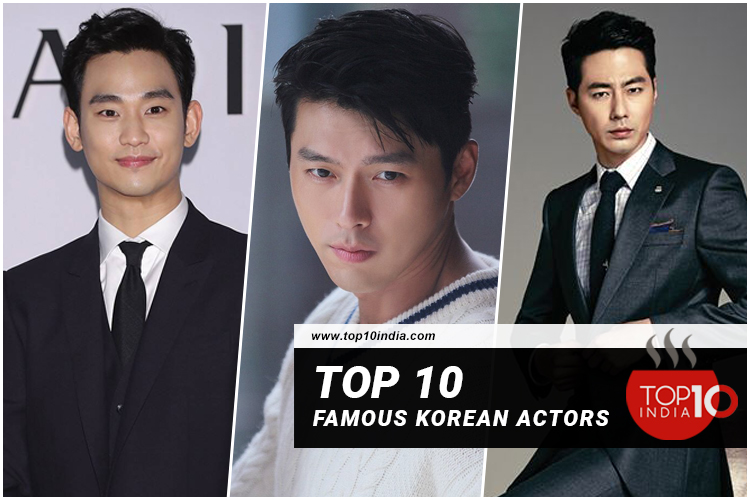 Top 10 Famous Korean Actors: Like Hollywood and Bollywood, Now Korean movies and series becoming popular day by day. Korean industry has introduced many smart actors to the world. These actors have become popular because of their acting skills, good looks, and talent.

These days Korean Movies and dramas are becoming more and more popular. One of the reasons behind this popularity is, its Handsome, smart, and dashing actors. These actors can make anyone fall in love with them just in one look. Here is the list of some most famous Korean Actors. These actors have become popular across the whole world.

Kim Soo-Hyun ranks at the first position in the list of the Top 10 Famous Korean Actors. He is a very amazing and successful Korean actor. His mother encouraged him for acting to overcome his shy and introverted nature. His first major acting was in a stage play of Shakespear’s comedy A midsummer Nights’ Dream. In 2007, he made his tv debut with a supporting role in the sitcom Kimchi Cheese Smile. He was seen in a lead role in a youth drama Jungle Fish. He was also seen in a food-based variety show Delicious Quiz.

Hyun Bin is a very well-known amazing Korean actor. He has studied Theatre Studies at Chung-Ang University. He also pursued his Master’s degree from the same university. He made his debut with the television series Bodyguard in 2003. In the same year, he made his movie debut with the sports movie Spin Kick. In 2011, he started his 21-month mandatory military service as a soldier in the Marine Corps. In December 2012, he was awarded the Secretary of Defense Award. In 2013, he was in high demand for endorsement of products. In 2016, he was also a part of the campaign against animal cruelty. In 2020, it was revealed that he made a secret donation of 200 million won to a non-profit organization ‘Community Chest Organization of Korea’.

Jo In-Sung is one of the most popular Korean actors across the world. He studied modeling and events management at Chunnam Techno University. After this, he pursued theatre and film at Dongguk University, but he was dismissed from there because of his insufficient attendance. He started his career as a model of clothes for the brand Ziozia. He made his tv debut with the sitcom Jump in 1999. In 2002, he made his movie debut with the movie ‘Public Toilet’. In 2016, he was made the ambassador of the National Tax Service. In 2015, he was ranked 32nd in the list of Korea Power Celebrity by Forbes.

Lee Min-ho is a South Korean actor, singer, and model. He wanted to become a professional football player, but he abandoned it when he got injured during 5th grade. Later, he pursued Film and Art at Konkuk University. She started his career with minor roles in tv dramas. He made his official tv debut in 2003 with the series Secret Campus. In 2006, his acting career was put on a hold because of his major car accident. He was injured very badly and spent several months bedridden. He became a popular personality with his lead role in Boys Over Flowers. In 2017 he started his mandatory military service at the Suseo Social Welfare Center. He was the first personality to perform on China’s CCTV Lunar New Year Gala. He was the first Korean celebrity to have a wax figure at Madame Tussauds.

So Ji Sub is a very known South Korean actor. He trained to become a professional swimmer for 11 years. He also won a bronze medal at the Korean National Games. After this, he started his career modeling, he started this career because he wanted to pose or perform with a hip-hop artist Kim Sung Jae. In 1995, he worked as a model for brand STROM. He made his acting debut with the sitcom Three Guys and Three Girls. He became a known person after his second male lead in Glass Slippers. In 2005, he started his mandatory military service and discharged from the in 2007. In 2010, he released his photo essay, his journey of acting for 13 years. He also owns the Apgujeoung-dong branch of CJ Foodville’s A Twosome Place.

Lee Seung-gi is one of the most successful Korean actors. He pursued Internation Trade and Commerce from Dongguk University. He also obtained two master’s degrees in Marketing Trade Theory and Finance and Cultural Contents. He trained for two years for singing by Lee Sun Hee. After two years, he made his singing debut with the Because You Are My Girl song from his first album The Dream Of The Moth. He made his acting debut with The Infamous Chil Sisters. In 2011, he was the most demanding brand endorser in South Korea. In 2016, he started his mandatory military service and was discharged in October 2017. His success in acting, singing,m and hosting earned him the title of ‘Triple Threat’.

Lee Jong Suk is a very well-known South Korean actor and model. He pursued Professional and Art at Konkuk University. He started his modelling carrer at the Seoul Collection Walkaway. In 2010, he made his acting debut with the tv series Prosecutor Princess. He made his movie debut with a horror movie ‘Ghost’. He gained fame with his supporting role in drama Secret Drama. He started his mandatory Military Service in march 2019 and was discharged on January 2021.

Yoo Ah-In is a very popular actor, creative director, and gallerist of South Korea. He studied at Dankuk University and Konkuk University, and completed a GED for high school certification. He also took the training for singing. In 2003, he made his debut with a tv commercial. Then, he made made his drama debut with teen series ‘Sharp’, and become a known personality. He is also the representive, curator, and creative director of Studio Concrete. He is the first Asian Actor to be a global model of Diesel. He is considered as one of the most outspoken actor in Korea. He has also advertised international brands like – Cartier, Absolut Vodka, Clavin Klien, Burberry, and more. In 2017, he revealed that he had bone tumor. In 2016, he was ranked 2nd Korea Power Celebrity by Forbes.

Song Joong Ki is a very well known personality of South Korean entertainment industries. In his childhood, he competed in short track speed skating and represented his home city at the national level. But after getting injured he abadoned this sport. He scored 380 marks out of 400 in national college entrance exam, and got admission Sungkyunkwan University. His father was against his acting carrer, so he decided to enter the entertainment industry during his third year. In 2012, he graduated with a degree in Businnes Administration. He was first time seen on a tv show KBS’Quiz Korea, and won second place. After this, he was launched as a cover model for the University magazine college. He made his acting debut with the movie ‘A Frozen Flower’. He also became the regular host of KBS Friday music program Music Bank. He is a celebrity advocate for cancer-stricken children. In 2020, he donated 100 million won for the Covid-19 Pandemic.

Ji Chang-Wook is a very known South Korean actor. He lost his father in his childhood and was raised by his mother. His mother worked at a restaurant for running household expenses. He studied theatre and film at Dankook University. He started his career with music theatre and was first time seen in the movie ‘Days’ but in a minor role. Later he made his official debut with the movie ‘Sleeping Beauty. He started his mandatory military service in August 2017 and was awarded a prize for high performance.

Who is the No 1 Korean actor?

Kim Soo-Hyun is the No 1 Korean actor.

Who are the most famous Korean actors?

In the above article, you can check out the most famous Korean Actors.