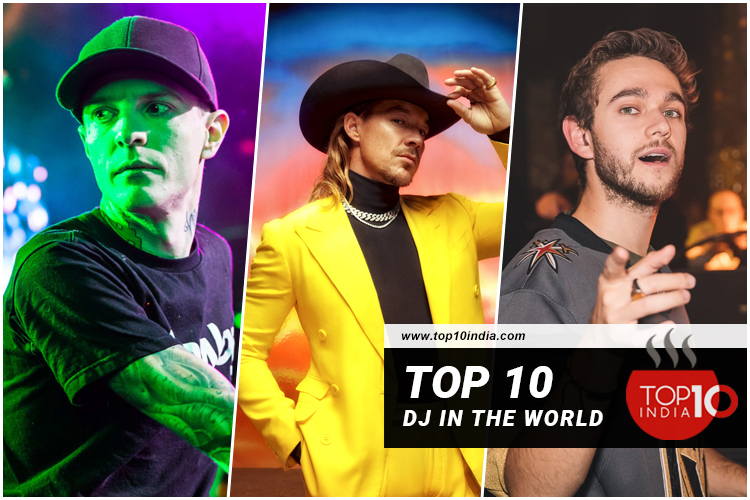 Top 10 DJ In The World | World Famous Most Popular DJ

Top 10 DJ In The World | World Famous Most Popular DJ: DJ is a person that mixes many songs to make a unique track. Dj uses different instruments like – turntables, DJ mixer, software, and many other things. DJs are mostly played at parties, concerts, and clubs. People enjoy dancing to DJ songs because DJs always create something unexpected.

Top 10 DJ In The World | World Famous Most Popular DJ

DJs are the one that makes the environment very energetic and positive. People love dancing to DJ songs because it gives a very unique and good vibe. People visit different clubs and concerts to experience new DJs. Here is the list of Top 10 DJs in the world.

Deadmau5 is ranked at 1st position in the List of Top 10 DJs in the World. He is the most popular music producer, musician, and DJ in the world. The first-ever album was released on 26th July 2005, and the name of the album was ‘Get Scraped.’ This album consists of some great tracks like Just Before 8bit, Nice Try, Kiddo, Uploading, and Downloading. After this, he released many albums. Some of them are – Random Album Title, 4X4=12, While (1<2), Album Titles Goes Here, and For lack of a Better Name. Many tracks of this guy are featured in the video game DJ Hero2.

Diplo is a music producer, songwriter, and American DJ. He also formed a record company, ‘Mad Decent.’ He started playing DJ in his college times. He started playing DJs at parties and clubs. These parties helped him in launching his first mixtapes in 2004 M.I.I approached Diplo when he was DJing in a nightclub. After that, they both started working. Together. Some of his most famous albums are – Florida, Diplo Presents Thomas Wesley, Chapter 1 (Snake Oil), and MMXX.

Zedd is a Russian songwriter, Dj, and music producer. He started his music career in Germany. In 2012 he launched his track ‘Clarity .’ His track led him towards his success journey. After this, he worked with many other great singers like – Selena Gomez, Alessia Cara, Maren Morris, and Ariana Grande. He also plays instruments like – piano, drums, vocoder, and Synthesizers. He also won APRA Music Awards for the best dance work of the year. After this, Zedd never turned back and became more and more popular in the world.

DJ Snake is a French music producer and DJ. He started his music journey in 2011 when he produced for Lady Gaga’s album ‘Born This Way. In 2013, he made his international debut with ‘Bird Machine’ and ‘Turn Down For What.’ He is also a part of the Pardon My French team and Tchami, Mercer, and Malaa. In 2018 he released his own record label ‘Premiere Classe.’ Premiere Classe consists of 11 songs, and the name of the songs are – 4B&Teez – Whistle, Azar & Bellecour – Da Vinci, Chace – Never, Masayoshi Limori – Flow, Say My Name – Burn, Gammer featuring San King – Out with the Old, Mercer – Boss, Plastic Toy, and Dj Snake – Try Me, Malla featuring Jackknife, Revolt, Sqwad – Big Ting Vibe, Plastic Toy – Escape.

Alan Walker is an English-Norwegian DJ and music producer. He stater his music journey in 2012, but not from a big stage. He started his career by posting his music on YouTube and SoundCloud. He performed his debut performance at the Winter X Games, Oslo. He performed 15 songs in his debut, along with Iselin Solheim. After this, they released many songs with several artists. At the starting of 2017, his youtube channel was the most subscribed channel registered in Norway. In 2018 he performed at Ultra Music Festival, Miami, where he shared the stage with Dutch DJ Armin Van Buuren. He also released a new track, ‘live fast,’ featuring A$AP Rocky and collaborated with PUBG Mobile.

Skrillex is a musician, singer, songwriter, and American DJ. He started his music career in 2004 by joining an American post-hardcore band, ‘From First to Last,’ as a lead singer. This band consisted of a lead vocalist Moore, a lead guitarist Matt Good, rhythm guitarist Travis Richter, bassist Matt Manning, and drummer Derek Bloom. He also created two albums with the band – Dear Diary, My Teen Angst Had a Body Count in 2004, and Heroine in 2006. From 2007 he started his solo journey and joined the Alternative Press Tour to support the bands. After this, in 2009, he recorded his debut studio album, ‘Bells’ with producer Noah Shain. He also collaborated with Diplo and Boys Noize to create the groups – Jack U and Dog Blood.

Marshmello is an American music producer and DJ. He started his career in 2015 by releasing his original song ‘Wavez’ on his Soundcloud page. After this, he released songs by American DJ duo Jack U and Russian German DJ Zedd. Later he released many remixes and got the support of Skrillex. In 2016, he also performed at Electric Daisy Carnival in Los Vegas. In 2018 he collaborated with a British band, ‘Bastille,’ and launched the song ‘Happier.’ He always wears a white-colored helmet that looks like marshmallows in his music concerts and public appearance.

Hardwell is a Dutch DJ, record producer, and remixer. He started his career in music by participating in various music competitions. Later he started playing Dj in Breda and became a known DJ personality there. In 2002, he made his first official release ‘Bubbling Beats 1’. He released his first solo track, ‘Play It Around’ in 2006. In 2009, he gained popularity after the unofficial release of ‘Show Me Love vs. Be.’ He debuted his studio album ‘United We Are ‘ in 2015. In 2018 he declared that he is taking a break from traveling because he wanted to focus on his personal life.

Tiesto is a Dutch Dj and music producer. He started his music career in 1994 by releasing tracks and remixes on Noculan Records. Later in 1997, he created Black Hole Recording and Arny Bink and released the albums Magik and In Search of Sunrise. From 1998 he started working with Dennis Waakop Reijers, and they are together sich then. His career took a great lead after his remix of the song ‘Silence’ of Delerium. After this, he launched his first solo album, ‘In My Memory.’ He was also voted as the World No. 1 DJ by DJ Magazine.

Calvin Harris is a Scottish DJ, music producer, singer, and songwriter. He started his music journey in 2006 and signed projects with Three Six Zero Groups, EMI, and Sony BMG. He released his first album, ‘I Created Disco’ in 2007. All the 14 tracks of this alum were written, produced, and performed by Harris alone. After this, he released his second album, ‘Ready For The Weekend’ in 2009. In 2014 he was the only person whose 3 songs were ranked in the Top 10 Billboard’s Dance Songs Chart.  He was ranked as the world’s highest-paid DJs from 2013 to 2018.

2. Who has won the most Grammy Awards in Djing and music?

David Guetta was the best DJ of 2020 in the world.

Published in A to Z, Country, Others and Personality