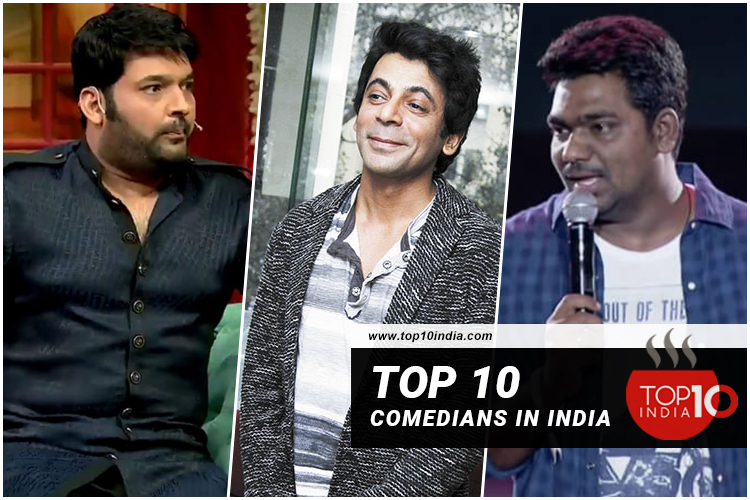 Top 10 Comedians in India:- Laughter is a very serious business. It is perhaps the hardest job of the entertainment industry and the one that involves the most risk. Comedians perpetually remain a step below the actors, and even if they did appear in movies, it is as sidekicks, with not much scope of development. They are asked to appear in award shows, with barely 5 minutes of screen time, to make the people laugh and then disappear.

There are some comedians who do not need to look out for opportunities to appear on television shows. They are invited there, and they have their own television shows too, which the audience waits for eagerly. Their TRPs are high and their content is strong, so they build a loyal audience. Some comedians are doing well enough to have their own tours, which may be nationwide or countrywide. Most of the time these tickets are sold out since the audience that had seen them on the internet or in movies eagerly come to see them in person.

Dubbed as India’s funniest man, Kapil’s real break came in the form of ‘Comedy Nights With Kapil’. The show was loved nationwide, and then worldwide. With fans all over the world, Kapil often went to do shows in other countries with his entire team. His fans even hold him responsible for getting them out of depression or treating them from their sickness. He took this a notch higher with his next show, ‘The Kapil Sharma Show.

Both the shows that are the basis for Kapil Sharma’s popularity, The Kapil Sharma Show and Come Nights With Kapil, depend on Sunil Grover and the many characters he plays. Despite being a fairly handsome man, he plays women, old men, and a lot more, with all seriousness. He is one of those comedians who take their work seriously. An example can be that when he left Comedy Nights With Kapil, a lot of the audience lost interest in the show.

The comedian belongs to Indore and is seen mentioning his hometown in his acts frequently. He rose to prominence by winning the competition for the Best Indian Stand-up Comedian in India by Comedy Central. He is a writer and presenter too, and has also worked in Star Plus’ ‘On AIR With AIB’.

John Prakasa Rao Janumala is a senior comedian born exactly ten years after our independence, on 14th August 1957, and is perhaps the best in his business. His 13 nominations for Filmfare in the category of the Best Comedian is clear testimony to that and as an actor, he has been a part of more than 300 films!

Vir Das returned to India in 2003 after extensive training in acting, method acting, intense training as a theatre actor, from many parts of the world. Once here, all of his shows at Indian Habitat Center have been huge hits where he performs in front of an audience of 900 each night, and the shows become sold out in a matter of days. He soon started appearing on television, and then in movies. When the internet became a good enough platform, he also treated his fans by uploading videos there, especially his shows Potcasts.

Having acted in many films and television daily soaps, Ali Asgar has now blossomed his career through his stint as a comedian. He was a contestant in the very first season of Comedy Circus with Kashif Khan and took the first place, then played the role of Dadi in Comedy Nights With Kapil, and is now essaying the role of Nani and other characters in The Kapil Sharma Show. Before all this, he played a very serious role in ‘Kahaani Ghar Ghar Ki’, as Kamal Aggarwal.

Sudesh Lehri’s permanent partner, no producer can even dream of driving these two away from each other. He is a great dancer and actor along with being a comedian. He has participated in the early seasons of both Jhalak Dikhla Jaa and Nach Baliye and is frequently teased for being ‘Govinda’’s nephew.

She stood third in ‘The Great Indian Laughter Challenge 4’ and since then has created a niche for herself. Having appeared in many award shows, reality shows, and dance shows, she is also a well-known anchor and has hosted many seasons of India’s Got Talent too. She previously appeared in Comedy Circus, but is now known for her appearance on ‘’ and ‘Comedy Nights Live’.

An internet sensation, Biswa’s fans know him to be an introvert. He was first noticed in the ‘Pretentious Movie Reviews, but there he had a partner who did most of the talking. However, when people saw him as a stand-up comedian, they realized that he was one of those comedians who genuinely made them laugh and crack up, with his awkwardness and brilliant joke

1. Who is the most famous comedian in India?

Kapil Sharma is the most famous comedian in India.

Sunil Grover is the no.1 comedian in India.

3. Who is the richest comedian in India?

Kapil Sharma is the richest comedian in India.

4. Who is the most senior comedian?

Johnny Lever is the most senior comedian.