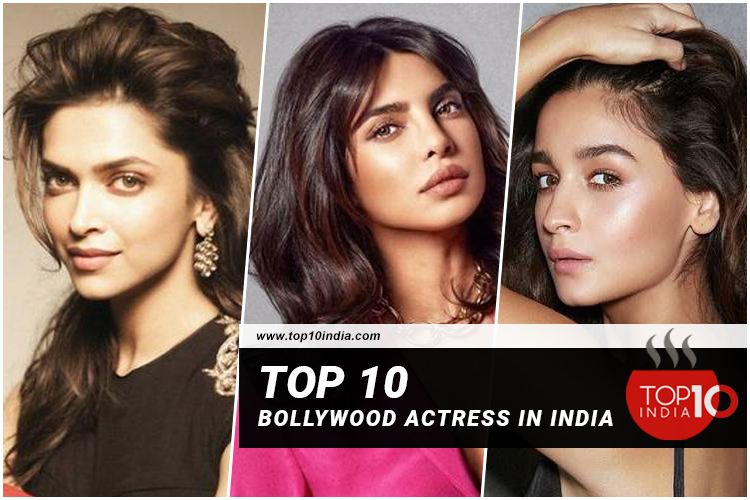 Top 10 Bollywood Actress in India: Bollywood has become the second-largest entertainment industry after Hollywood by providing more than 800 movies a year. It has given rise to many famous actresses not only in India but across the world. These actresses perform a variety of roles in the movie; they sing, dance, and even do action scenes as well. They influence people by their acting, personality, and even living style.

Indian actresses have gained their place by the success of their movies at the Box Office. Here, we are going to talk about the top 10 actresses in Bollywood. The position of actresses on the list is based on their popularity in India. So, let’s see the list of top 10 actresses of Bollywood-

Deepika Padukone is a model turned actress cum producer of the Indian film industry. She is among the highest-paid actresses in Bollywood and is featured among the Nation’s most popular personalities. TIME magazine has listed her in the list of top 100 Influential Celebrities in the World. Deepika is the daughter of Prakash Padukone a former Badminton player who was born in Copenhagen, Denmark. She has played the national level Badminton Championship but left the career and joined fashion modelling. “Om Shanti Om” (2007) was her debut film in which her co-star was Shah Rukh Khan and she was critically acclaimed for Sanjay Leela Bhansali’s tragic romantic movie “Ram-Leela”. She often speaks very freely on the topic of feminism and the depression of women.

Miss world 2000, Priyanka Chopra is an actress, film producer, and singer. She is one of the highest-paid actresses of Bollywood and one of the most popular celebrities not only famous in Bollywood but also in Hollywood. She made her debut in 2003 from the movie named “Hero: Love Story of Spy” from then she never looked back. She had given back-to-back commercially successful movies in Bollywood. Apart from these, she promotes humanitarian causes such as the safety of the woman and environmental issues. She is UNICEF Goodwill Ambassador and her own Foundation Namesake gives support to needy children.

Alia Bhatt made her debut as a child in a thriller movie Sangharsh (1999) and started acting in lead roles from Karan Johar’s movie ‘Student of The Year’. She is a British Indian actress cum singer performing in the Indian film industry. Alia was a girl born with a golden spoon as she is the daughter of Filmmaker Mahesh Bhatt and actress Soni Razdan. Along with acting in films, she has launched her line of clothing and handbags. She also owns a production company named The Eternal Sunshine. She has been featured in Forbes Asia in their list of 30 under 30. She has also appeared on Forbes India 100 list.

Katrina Turquotte commonly known as Katrina Kaif is an actress of British origin and works in the Hindi film industry. She is a fashion model turned actress and made her entry with film “Boom” (2003) but it was a commercial failure but after that, she has given many commercially successful movies such as Rajneeti (2010), Namaste London (2007), Zindagi Na Milegi Dobara (2011), Ek Tha Tiger and Tiger Zinda hai, etc. Other than acting she indulges herself in her mother’s charities and more often performs stage shows.

Kareena Kapoor Khan is one of the highest-paid actresses in Bollywood who is admired and loved by her fans for the last two decades. She is noted for her variety of roles from comedy to drama to thrillers. She comes from a filmy family; her father is actor Randhir Kapoor and her mother is actress Babita. She is the granddaughter of Great Show Man of India, Mr. Raj Kapoor. she is known for her roles in the movies Good Newzz, Kabhi Khushi Kabhie Gham, Jab We Met, Omkara, which are some of her famous movies. She has started her line of clothing and cosmetics. She has also worked with UNICEF for advocating girl’s education and quality-based education in India

Anushka Sharma is among the most popular and highest-paid actresses in Bollywood. She is an actress cum film producer who has appeared in Forbes India’s Celebrity 100 list and Forbes Asian Under 30 list. Initially, she was a fashion model and made her debut in the romantic film “Rab Ne Bana Di Jodi” in which his co-star Shah Rukh Khan. This movie was a commercial success and critically acclaimed. After this movie career path of Anushka was changed, she had given back-to-back successful movies. Some of them are Band Baja Baaraat, Sui Dhaga, NH10, Jab Tak Hai Jaan, Sultan, etc. Apart from acting she is an ambassador of multiple brands and products, she has also introduced and a new line of clothing for women. She also supports many humanitarian causes and charities such as gender equality and animal rights.

Miss world 1994 Aishwarya Rai Bachchan established herself in Bollywood as the most influential and popular actress by her success. She is a Diva, an icon known for her flawless beauty, dresses, and always happens to amaze her fans, from her appearance. Her acting career starts with Mani Ratnam’s Tamil film “Iruvar” and in Hindi “Aur Pyar Ho Gaya” was her first film. Hum Dil De Chuke Sanam (1999), Devdas (2002), Provoked, Jodha Akbar, are names of some of the most successful films of Aishwarya Rai. Along with these, she is the brand ambassador of many organizations and campaigns.

Sonam Kapoor is an actress working in mainstream Hindi cinema. Sonam Kapoor comes from a filmy family, she is the daughter of actor Anil Kapoor. At the beginning of her career, she worked as assistant director on Sanjay Leela Bhansali’s drama film “Black”. She first appeared in Bhansali’s musical-romantic, drama “Saawariya” (2007) which did not perform well. After giving a series of weak films, she was critically acclaimed for “Raanjhanaa” (2013) and then came up with some good hits like, “I Hate Luv Story”, “Prem Ratan Dhan Payo”, “Bhaag Milkha Bhaag” and “Neerja”. Along with acting she also raised her voice for LGBT rights and awareness for breast cancer.

Q1. Who is the top actress in Bollywood?

Ans. Deepika Padukone is the top actress in Bollywood.

Q2. Who is the international actress in Bollywood?

Ans. Priyanka Chopra is an international actress in Bollywood.