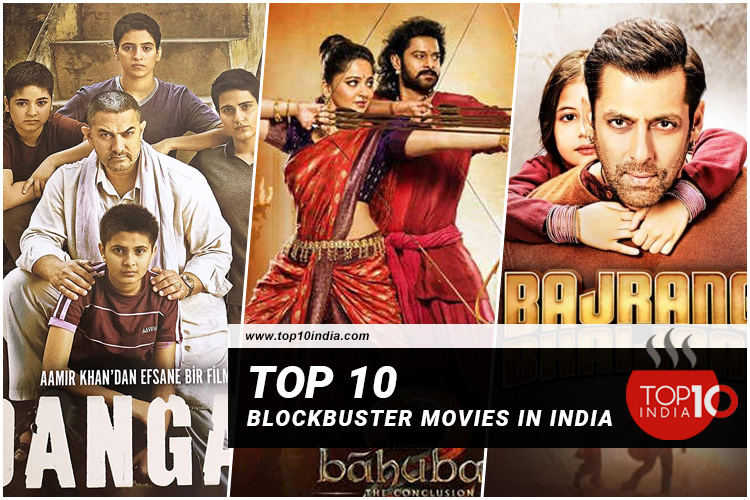 Top 10 Blockbuster Movies In India: Having a rating of 9/10, Dangal is the number 1 blockbuster movie in India whose storyline revolves around wrestling. From tragedy to comedies and from thrillers to emotional movies, Bollywood has everything and it shows the audience in India every aspect of life and has earned the respect of the audience through excellent storyline and screenplay. Bollywood has excellent movie actors who reflect the cultural mirror of our country. The audience is always motivated by the technological marvel the Bollywood has accomplished over the period.

Indian cinema is known for excellent screenplay and storyline, over the past few years and has made its position beyond the Indian border. Indian theatre has shown Indian culture and heritage in a foreign land and earned respect. The blockbuster movie has excellent screenplay and dialogues which was applauded by the audience and made a mark In Indian cinema. Here is our list of the top 10 blockbuster movies in India.

The rating of Dangal film is 9/10. 2016 Hindi movie earned highest among Bollywood movie. The movie was made with a budget of 70 crores and earned 2100 crore worldwide made film all-time blockbuster movie all time. The film focuses on the biography of the phogat family. Hindi sports drama biography is directed by Nitesh Tiwari and produced by Amir khan Production and Siddharth Roy Kapur.

The film showcased the hard work of the father to make his daughters into Indian wrestling. Aamir Khan casts as  Mahavir phogat was praised by critics. It showcased different stages a father faces to teach her daughters wrestling and to bring a gold medal to make him and his country proud.

The movie showed women’s rights in Indian sports and society. The excellent storyline with great acting skills showcased by actors in the film made the film the highest-grossing film in Bollywood but also abroad.

Bahubali 2 was showcased in 2017 and was directed by S . S Rajamouli produced by Arka Productions. The rating of Bahubali 2 is 9/10. The movie was primarily made in Telugu and Tamil, Starred by Prabhas, Anushka Shetty, Rana Daggubatti and Tammanha in Lead role is an all-time blockbuster movie made in  India, made a sequel to Bahuballi the beginning.

Excitement to know the ending following part one, Character Kattapa killing Bahuballi raised goosebumps in the entire episode. Emotional and thriller scenes with excellent background music and of course hard work of the director made the movie the blockbuster of all time. The movie earned an estimated 1810 crores with a budget of 250 crores.

The rating of Bajrangi Bhaijan is 8/10. In 2015, Hindi movie directed by Kabir khan was written by Bahuballi co-writer V K Viajyaendra Prasad produced by Salman Khan films and Rockline Venkatesh. The story of Bajrangi Bhaijan revolves around connecting differences between two countries India and Pakistan.

The main story revolves around a six-year mute girl from Pakistan and a Hindu man who hails from a radical Hindu family, it establishes a good relationship between the Hindu and Muslim unity. The audience loved the performance of Salman and Harshalli Malhotra who played the role of a six-year mute girl.

The movie revolved around returning a Muslim girl to her motherland through a proper channel. The movie was made with a budget of 90 crores and earned 1000 crores worldwide.

The rating of Secret Superstar is 8/10. In 2017, this musical drama movie won the heart of the audience, showcased the challenge faced by the girl from a middle-class Indian Muslim family who aspires to become a singer become famous on youtube while Aamir khan is cast as a mentor for the girl for her journey to become singer, her unity and integrity towards becoming singer send a message to society passion is more important than building up a career with bounded instruction from parents.

Her union with a  singer helped her to chase her passion. Written and directed by Adavit Chandan produced by Aamir Khan and Kiran Rao the movie was made with a budget of 15 crores earned worldwide 965 crores.

The rating of PK is 8/10. 2014, Rajkumar Hirani’s movie is meaningful and sends a strong message to society in the bottom line. His movies give the audience every paisa spends on the ticket.

PK Movie revolves around an alien (Amir Khan) who lands on the earth and finds it difficult to adjust in the Indian culture and finally meets a girl (Anuska Sharma) who helps the alien find his necklace so that he can return home. The movie showcased how people are so obsessed with god and superstition that they make a miserable life ending up with faith in God. The movie was made with a budget of 85 crores and made an earning of 854 crores.

Robot 2.0 was made after a huge success received by Robot 1. Robot 2.0 has a rating of 8/10. Another south Indian movie dubbed in Hindi has excellent visual effects and is worth every penny spent on movie tickets, the 2018 movie was made with a budget of 565 crores and made up 800 crores.

Starring Akshay Kumar and Rajinikanth opposite to each other, thrilled the audience but the budget was huge. The movie revolves around the use of mobile technology and how radiation coming out of mobiles towers affects the brains of birds and drains their power. The movie sends a strong message to society about the use of mobile.

Bahuballi 1 received a rating of 8/10. Bahuballi is the third south Indian movie on the list of blockbusters, more mythical stories showcasing culture and religion of India Directed by S S Rajamouli budget of 180 crores made an earning of 650 crores.

The story revolves around Shivgami ruling the throne for his two sons. Excellent graphics and stunts scenes conceived audience and applauded for landmarking performance by actors. The movie is full of strong background music and songs that made this movie leave a long-term impact on the audience by structuring war stunts and showcased patriotism towards her motherland against foreign invaders.

The rating of Padmavat is 8/10. Padmaavat is a 2018 movie based on the epic poem of Malik Muhammad Jaysi. The movie is considered as the most expensive movie budget of 160 crores and earned of 585 crores though movie not earned much as a matter of revenue but the storyline and screenplay made amazing texture to Indian cinema.

It is one of the blockbuster movies made by Sanjay Leela Bhansali, who is known for dramatic screenplay and amazing emotional dialogues in the movie, making the audience feel more of the royal texture and scenery in the movie.

2016 Indian wrestler movie directed by Ali Abbas Zafar made with the budget of 145 crores and earned a revenue of 623 crores received a rating of 8/10. The movie showcased Indian wrestlers and motivated and inspired for opting Wrestling as a career. The movie starred Salman Khan and Anushka Sharma in lead roles.

Another one among the Top 10 Blockbuster Movies In India, is the Ali Abbas Zafar movie that was made with an excellent storyline, showing the relation between two countries India and Pakistan. The movie is the sequel to the movie “tiger” which was also a super hit.

The movie has an excellent soundtrack and shows how the intelligence agencies of two countries work together to get out hostage from the hostile country within the time frame. Starring Salman Khan and Katrina Kaif in lead roles, both of them are shown as rogue intelligence officers from their respective countries.

The movie was made with a budget of 210 crores and earned a revenue of 600 crores, and the storyline and screenplay are excellent thrillers and gave goosebumps to the audience.

Which is the no 1 movie in India?

Dangal is the number 1 movie in India.

Which is the super hit movie in India?

Tiger Zinda hai is a super hit movie in India.

Which is the best blockbuster movie in India?

Padmaavat is the best blockbuster movie in India.

Published in A to Z, Entertainment, Social and Sociology & Society