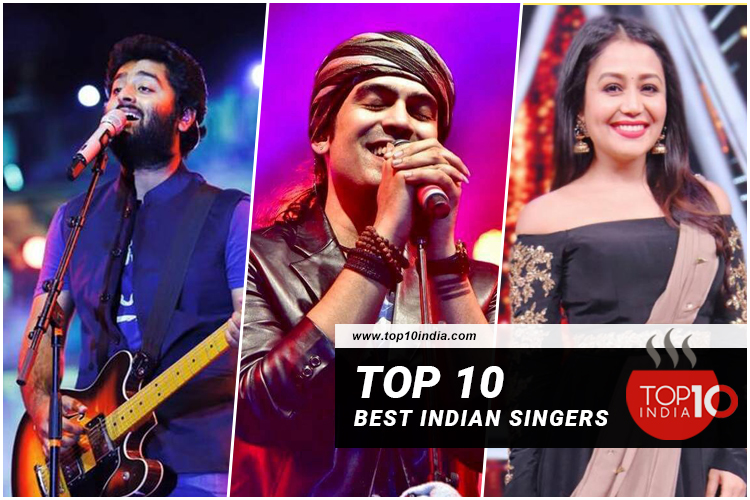 Top 10 Best Indian Singers: Arijit Singh is the number 1 best Indian singer who has a melodious voice that steals everyone’s heart. The journey of Bollywood music started with the release of the first musical Indian film AlamAra that was released in the year 1930. The journey has been very evolutionary we used Gramophones in 1934 which was later replaced by Radio. Over time, Bollywood songs have gained worldwide fame.

There are numerous hit Indian singers in the Bollywood film industry and some of them will always be considered as evergreen singers of all time all over India. Are you aware of who are the most popular singers in Bollywood? If not then have a look at the list given below listing the Top 10 Most Popular Bollywood Singers 2021.

Arijit Singh is a Bengali Man whose voice steals the heart of everyone who listens to his voice. He initially appeared on screen in the year 2005 by entering the Indian reality show named “FAME GURUKUL” on National TV. He holds the no.1 position in the list of most famous and successful Bollywood singers in 2021. He got actual recognition in the industry when his song “Tum Hi Ho” of film Aashiqui 2 turned out as a blockbuster song of Bollywood.

Another young, talented, and one of the most popular Indian singers in 2021 is Jubin Nautiyal. Along with being a popular singer, he is also an amazing songwriter, and music composer. His melodious voice should be credited for his nationwide fame. He is well aware of how to play 8 musical instruments inclusive of guitar, harmonium, flute, and piano.

Along with his musical talent, he is also a district-level athlete and a national-level shooter. Jubin made his debut in the singing industry with the song ‘Ek Mulakat’ from the movie Sonali Cable.

Over a short duration of time, Neha Kakkar has earned huge popularity for her songs. She is loved more for romantic and love songs. It seems like she is more famous among the young generation. In the year 2008, her first album Neha-The Rock Star was premiered. It was the song Sunny Sunny of Yaariyan movie which played a big role in uplifting her career.

Atif Aslam is a Pakistani singer who is loved for his voice in Bollywood and has received so much love from the audience. The song that gave him popularity in India was “Woh Lamhe” and he gained popularity in Pakistan with the song “Aadat”.

Atif has given many super hit songs to Bollywood. Atif enjoys a worldwide fan following for his singing expertise and fabulous vocal skills. Atif Aslam has such a beautiful voice that he has only national but also so many international fans as well.

Armaan Malik is considered to be one of the youngest talented playback singers, songwriters, and actors of the current time. He belongs to a famous family with having a background that is related to music. He is from Mumbai. The song tracks of Arman Malik’s undoubtedly created a secured place in everyone’s list of favourite songs. He can sing in different languages well. Armaan Malik is quite young than other singers in the industry.

Sonu Nigam is one of the most talented and versatile Indian playback singers of all time. His expertise in musical skills isn’t limited by one or two languages but he can and he has sung songs Manipuri, Gharwali, Oriya, Assamese, Punjabi, Marathi, Telugu, Nepali, and many other languages. His sweet voice gifted him a huge number of fans worldwide. He began singing at the tender age of 19.

The Indian singer Sunidhi Chauhan, among the Top 10 Best Indian Singers, is famous among the masses for her electrical distinctive voice. From the age of 4, she began singing in the local gatherings. She entered Bollywood at the age of 12 from the film Shastra in 1996. Sunidhi has been honored with many awards as a playback singer. Her fabulous voice seeks all the attention of the song lovers.

In our list of the Top 10 Best Indian Singers, Shreya Ghoshal has the most melodic voice. She is one of the most popular Indian female singers in Bollywood for years. She made her first appearance in the reality show “Sa Re Ga Ma Pa” which was a popular singing competition. She got appreciation through the judges. Later on, when Shreya lent her voice for the film Devdas this became her best decision as she got fame and made uncountable fans.

Dhvani Bhsnushsli’s song ‘Vaaste’ crossed 1 billion views on youtube. With achieving this target she became the first Indian to reach this record. Dhvani was passionate and was inclined towards music since childhood. It was her ambition and passion that made her create a youtube channel. She is a versatile singer as she sings songs of different genres.

Among the Top 10 Best Indian Singers, Kanika Kapoor is a famous playback singer of Bollywood. She is a singer who earned fame in a short period. Her career initiated when in the year 2012 her song “Jugni” was released but her career was boosted up by the song Baby Doll which she sang and it became the most popular song for the year 2014.

Neha Kakkar is the best singer in Bollywood in 2021.

Sonu Nigam is the highest-paid singer in India in 2021.

Armaan Malik is the best male singer in India 2021.