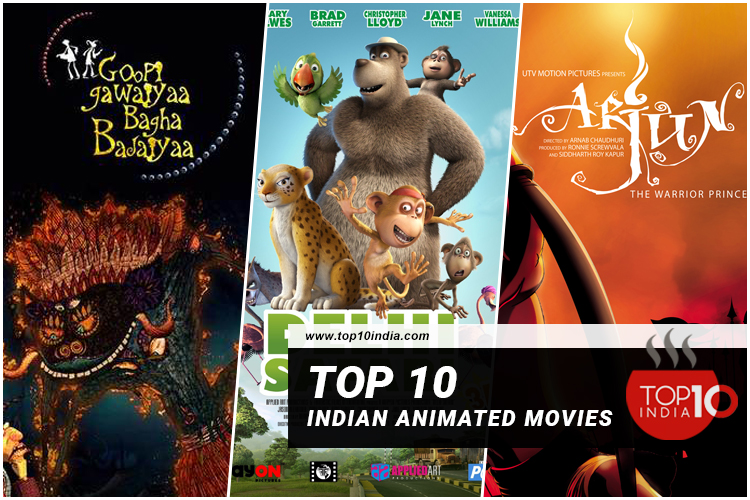 Now, India has also started making animated movies for children and adults. These are specialized for children, and the makers of the movies always try to get good moral from their movies. To make children know about Indian history and culture, many movies are made on Hindu Diety’s and the Great Indian wars like Mahabharat and Ramayana. Here is the list of Indian Animated Movies that every parent should make their children watch.

Gawaiya Bagha Bajaiya ranks at the first position in the list of Indian Animated Movies. This movie is based on Goopy and Bagha, created by Satyajit Ray’s grandfather Upendra Kishor Roychowdhary. This movie is based on two blundering lovable musician protagonists, who meet ghosts, obtain boons, avert wars, marry princesses and help the common people live happily ever after. The star cast of this movie consists of Manish Bhawan as Bagha, Rajeev Raj as Goopi, Shailendra Pande as Ghost King, Shahanawaz Pradhan, Vishal Kumar as Ladoo, Aditya Sharma. The screenplay of this movie was by Soumitra Ranade and Rohit Gohlowt.

Delhi Safari is an Indian computer-animated comedy musical film. Nikkhil Advani wrote this movie. This movie is the story of a journey managed by a leopard cub, his mother, a monkey, a bear, and a parrot when the forest they live in is on the verge of destruction. This movie features Govinda’s voice as Bajrangi the Monkey, Akshaye Khanna’s voice as Alex the Parrot, Boman Irani’s voice as Bagga the Bear, Urmila Matondkar’s voice as the Begum the Mother Leopard, Suneil Shetty’s voice as Sultan the Leopard, Swini Khara’s voice as Yuvraj the Cub Leopard, Prem Chopra’s voice as Kaalia the wolf, Deepak Dobriyal’s voice as Hawa Hawai the pigeon, Sanjay Mishra’s voice as Marela, and Saurabh Shukla’s voice as Bharela.

No 3. Arjun: The Warrior Prince

Kochadaiiyaan is an Indian Tamil/ Hindi language animated action film. K.S Ravikumar wrote this movie. This story is about a young boy named Rana, who hails from the kingdom of Kottaipattinum. The star cast of this movie is – Rajinikanth as Kochadaiiyaan, Deepika Padukone as Princess Vadhana Devi, R. Sarathkumar, Aadhi Pinsetty as Veera Mahendran, Rukmini Vijayakumar as Yamuna Devi, Shobana as Princess Yaaghavi Mahadevaki Devi, Jackie Shroff as Raja Mahendran, Nassar as Rishikodagan, Shanmugarajan as Devadhevan, and Ramesh Khanna as Nagesh.

Roadside Romeo is a 3D computer-animated romantic comedy movie. Jugal Hansraj wrote this movie. This story is based on a dog named ‘Romeo’ who lived in luxurious surroundings. But one day, his owner migrated to London and gave him to his servant. But the servant dumps him on the streets of Mumbai. To know the whole story of this movie, you have to watch this movie. The voice cast of this movie is – Saif Ali Khan as Romeo, Kareena Kapoor as Laila (Romeo’s love interest), Javed Jaffery as Charlie Anna, Vrajesh Hirjee as Guru, Kiku Sharda as Hero English, Suresh Menon as Interval, Tannaz Irani as Mini, Sanjay Mishra as Chhainu, and many more.

Hanuman is an Indian animated feature film. This movie was written by Milind Ukey, Sulekha Bajpai, and Shantanu Ganesh Rode. This features the life of the Hindu Deity Hanuman. The voice cast of this movie is – Mukesh Khanna as Hanuman, Viraj Adhav as Ram, Mona Shetty as Seeta, Manoj Pandey as Meghnath, Rajesh Jolly as Ravan, Sanket Jaiswal as Angad, Shahnawaz Pradhan as Sugreev, Manish Wadhwa as Indradev, and Anup Shukla as Pawan dev. This movie collected Rs. 81.8 crores and was declared a hit at the box office.

No 8. Ramayana: The Epic

Ramayana: The Epic is an Indian computer-animated film. The story of this movie was by Rituraj Ramendra Tripathi. This movie is a retelling of the story of Lord Ram, from his birth to his battle with Ravan. The voice cast of this movie is – Manoj Bajapyee as Prince Ram, Juhi Chawla as Princess Sita, Ashutosh Rana as King Ravan, Mukesh Rishi as Hanuman, Rishabh Sukhla as Prince Lakshman, Dilip Singha as King Dashrath, Neerja Mathur as Trijata, Niti Mathur as Kaykai, Sursa, Tadka, Shailendra Pandey as Sugreev, Abha Parmar as Manthra, Saurav Chakraborty as Shuk, Munadiwala, Dishi Duggal as Sumitra, Nayani Dixit as Shurphakha and Urmila, Anand Singh as Vibhishan, and many more.

Jumbo is a Bollywood animation movie. This movie is a story of a little elephant who tries to find his father, and that journey of finding his father made him a war elephant. The movie starts with Akshay Kumar singing a song, then starts talking to one child who seems depressed. He narrates the story of Jumbo to that child. This movie features Akshay Kumar’s voice as Jumbo the elephant, Lara Dutta as Sonia, Rajpal Yadav as Dildar Yadav, Dimple Kapadia as Devi, Amar Babaria as Rajkumar Vikramaditya, Asrani as Senapati, and Gulshan Kumar as Bakhtavar.

Q- Who is the best animator in India?

A- Every animator has different qualities; we cant choose one out of them. So here are some of the best animators of India – Kireet Khurana, Dr. Rajiv Chilaka, Ishu Patel, Bhimsain Khurana, and Ram Mohan. You can check out some best Indian animated movies in the above article.

2. What is the first 3D animated movie in India?

Roadside Romeo is the first 3D animated movie in India.

Published in A to Z, Cartoon, Entertainment, General knowledge, Personality and Social